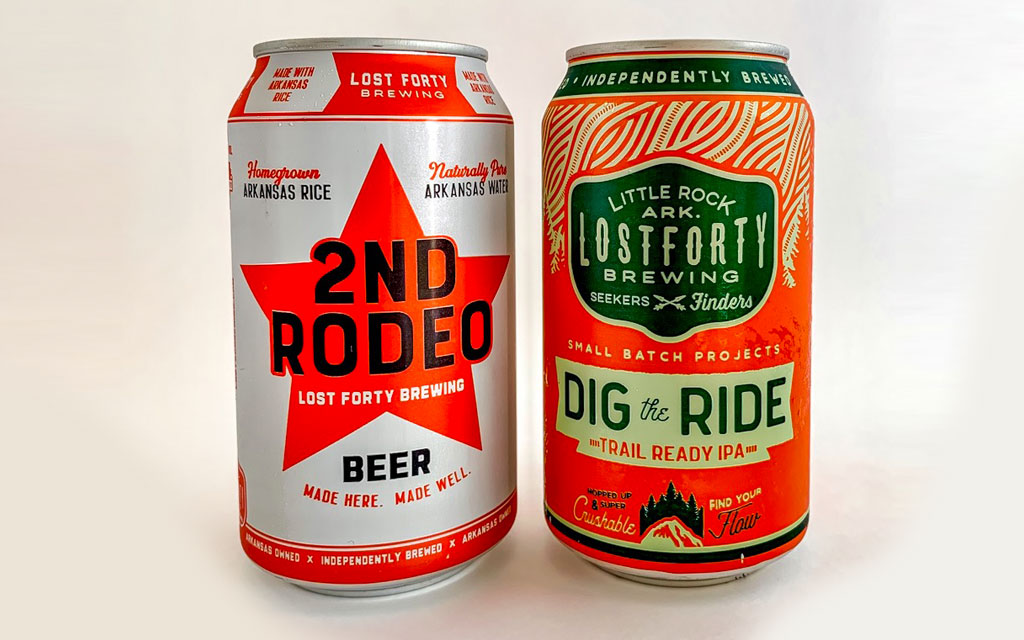 If you follow the Arkansas brewing scene, you’ll notice a wide range of beer being made today. Yet there’s so much foot traffic in brewery taprooms that special releases are consumed almost entirely at the source, never to make it to the broader retail market.

That’s a bummer for the slice of the craft beer demographic that does most of its drinking at home. Those people don’t get to enjoy the full diversity of local beer because their local corner stores are relegated to the high-volume staples of IPAs, pales and blondes.

Fortunately, things are beginning to change. Consumers are seeing more packaged beer from Arkansas breweries that fall outside their core portfolios. Investments in packaging capabilities have intersected with consumer interest, creating a market that is becoming more interesting by the day.

A recent visit to a Fayetteville beer retailer proved this to be true. There were several Arkansas breweries with new beers on display.

Ozark Beer Co. was front and center with a couple of its new lagers. The style has gained traction across the United States over the last few years, and the Rogers brewery is capitalizing on the trend with the simply-named Lager. Right next to it stood Ozark’s collaboration with local lifestyle brand Fayettechill. River Water Lager has a bit of a brawnier backbone, yet both beers represent cool, crisp options for these warm summer nights. A percentage of sales of River Water Lager is donated to local outdoor groups. $1,890 was raised for the Northwest Arkansas Land Trust last month, with July’s donation benefiting the Buffalo River Foundation.

The Arkansas brewery that seems to present the most diversity of choice at retail is Lost Forty Brewing Co. You can typically find 10 or more beers from the Little Rock powerhouse at your local package store. 2nd Rodeo is a new light beer from Lost Forty brewed with Arkansas rice. It weighs in at 4.3% ABV and is set to compete with the macro lagers that have long dominated the state. Also new from Lost Forty is Squirrel Sailor Hazy IPA. It is perhaps a more approachable alternative to the Trash Panda series of hazy IPAs that the brewery has been putting out for some time now. Dig the Ride Trail Ready IPA rounds out the new market entrants from Lost Forty. It is a middle-of-the-road example of the style, with some refreshing citrus notes.

A few other Northwest Arkansas breweries have new and interesting products available at your favorite corner store.

Though not a brewery by definition, Springdale’s Black Apple Crossing has made perhaps the biggest splash in the state by canning its high-quality ciders for home consumption. Hibiscus, blueberry, and pineapple versions have been spotted throughout Northwest Arkansas. The strawberry edition was especially delightful. Black Apple Crossing recently entered the Little Rock market, further increasing the state’s knowledge of what cider is supposed to taste like (that is, not sugary sweet like those national brands).

Hard seltzer has been catching on across the country. Here in Northwest Arkansas, Core Brewing Co. introduced its version of the “style” — Scarlet Letter. The marketing push behind Scarlet Letter is inescapable. It is found in virtually every beer outlet throughout the region. Some people are skeptical of hard seltzers and see them as a fad. They do seem to have their place in the local market now, with Ozark Beer Co. also introducing “hard water” in its taproom. Poolside may be the best place to enjoy these thin-bodied cousins of beer.

Bentonville’s Bike Rack Brewing Co. has a few notable one-offs available these days. Its collaboration with New Belgium Brewing Co. — Rebel 29er — has been out for a while, but the hoppy pilsner is still delighting area beer drinkers. Now Grapefruit Farmhouse Ale is back in the market. The underlying style is refreshing on hot summer days, and this version is even more so with a bright citrus kick. Bike Rack has canned several other small-batch releases recently — Gilded Maple Belgian-Style Quad Ale, Peachy Kween (a peach hefeweizen), and Ginger Lemon Witbier to name a few.

Brewery taprooms are fun places to visit. In many ways, they have become cultural crossroads for local communities. They are places to catch up with friends, have impromptu business meetings, or meet new people.

Yet not everyone has the time or inclination to visit taprooms regularly. Some people may be more introverted, or perhaps they have responsibilities at home that are hard to break away from.

The good news is that Arkansas breweries are putting more of their beers into cans and sending them to the broader retail market. Now a quick trip to the corner store can yield some of the most exciting new releases in our state today.

One response to “New Arkansas Beer for Home Enjoyment”