Hendrix College: Liberal Arts (With a Dash of Hogwarts) 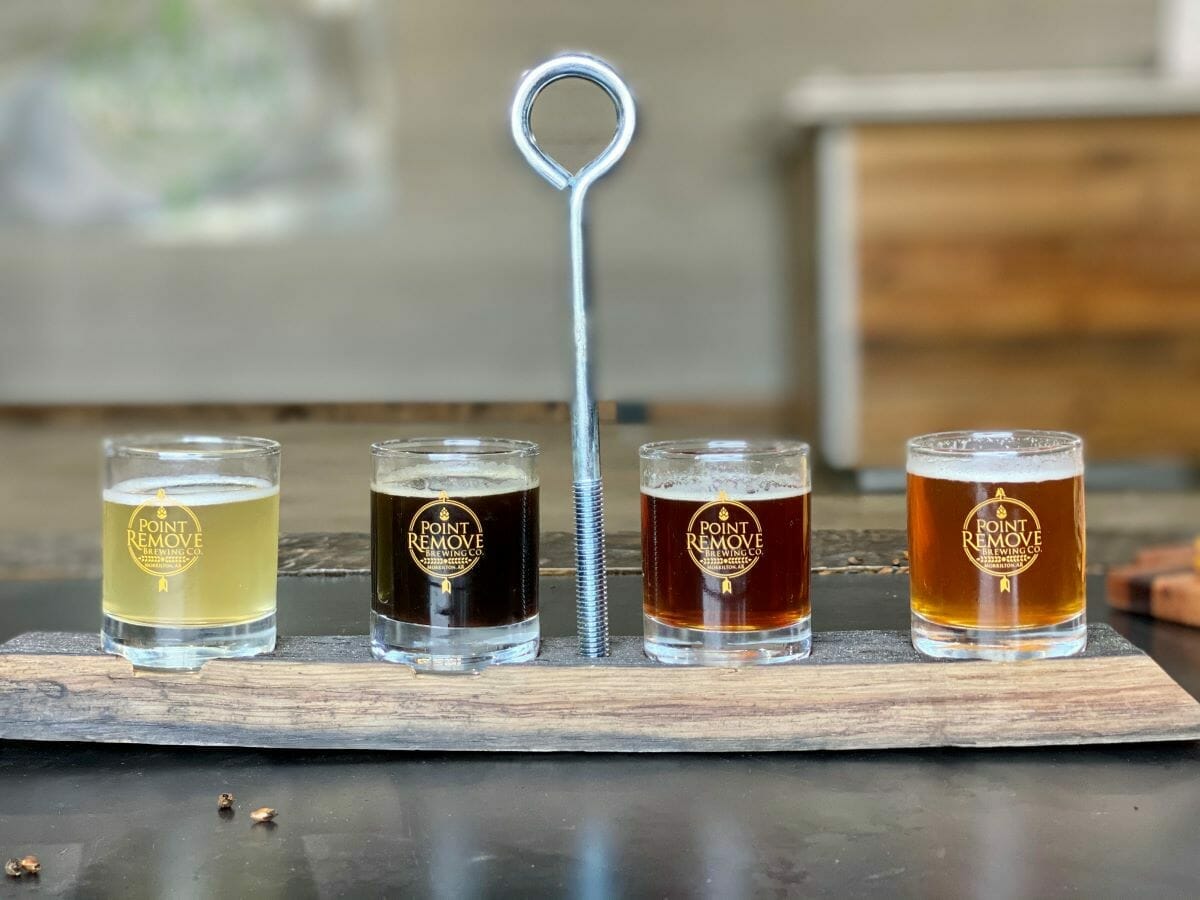 If you’re looking for a unique Arkansas attraction to visit this weekend, look no further than Point Remove Brewing Company in Morrilton. Owned by local entrepreneurs Mike and Suzan Miller, the brewery is located on state Highway 64 just east of historic downtown.

While Arkansas is home to many wonderful craft breweries, what sets Point Remove Brewing apart is that they also make delicious Arkansas wines.

In fact, the whole operation began when owner Mike Miller started making wine under The Point Winery label at his property north of Morrilton. Point Remove Lodge and hunting retreat is nestled in the small town of Hattieville along Point Remove Creek. In 2020, the brewery opened at its current location in Morrilton and the wine operation was also moved into the facility.

The brewery is located in what was originally a Crestliner boat factory and then became a Coca-Cola bottling plant in the late ‘60s. The building was vacant for many years when the Millers bought it to use as a research and development facility for some of their other business ventures.

About one-third of the 60,000-square-foot building was converted into the brewhouse and wine-making facility. Just through the front doors, visitors are welcomed in the taproom open to the public Thursday through Sunday.

Guests can enjoy the regular lineup of Point Remove beers and The Point Winery wines on tap, and there is always at least one new seasonal rotating tap to try. The bartenders are quick to help you discover which beer or wine will be the most pleasing to your palate and can help assemble a tasting flight to find your favorite.

The taproom at Point Remove is cozy but with limited seating available. Many patrons take advantage of the large dog-friendly patio and lawn. On the patio, you’ll find a collection of yard games and on Friday nights, a local artist playing live music.

The brewery doesn’t have a kitchen, but with your drinks you can enjoy a charcuterie board from another Arkansas favorite, Petit Jean Meats. Most weekends you’ll also find an impressive lineup of some of Central Arkansas’s favorite food trucks parked out front.

An event space upstairs above the taproom provides a view overlooking the brewery through a large picture window. This offers a peek behind the scenes at the operation. Unless it’s occupied by a private party, this space is open to the public for indoor seating. The whole place is furnished with metal, leather and wood accents as a nod to the industrial roots of the building and even includes furniture designed and built by the brewery’s diligent team.

Point Remove Brewing Company makes a variety of classic craft beer styles with the most popular being their “Petit Jean Pilsner,” a light brew aptly named after Arkansas’s first state park just a short drive from the brewery.

Most of the beers made at the brewing company are named with a nod to the Natural State. The Native Lager will excite any southerner’s palette with a hit of muscadine flavor inspired by The Point Winery’s Raquel, a sparkling muscadine wine. You’ll also find Longpool American Pale Ale, Conway County Cream Ale, and Motown IPA (Indian Pale Ale) among other titles on the taproom wall.

Director of Operations Lee Green says, “We create our products with the outdoor enthusiast in mind.”

An avid mountain biker himself, Green has a degree in hospitality management from Arkansas Tech University. He is also a Napa Valley Wine Academy Wine and Spirits Education Trust Level 3 Wine Expert. “I mean, how lucky are we to be located right here at the foot of Petit Jean State Park and to be less than two hours from just about every attraction the state has to offer!”

Green started out his career at Post Winery in Altus, a leader in the Arkansas wine industry. Joining Point Remove Brewing Company gave him the opportunity to expand his horizons into the Arkansas craft beer scene. He’s also the brains behind the popular wine cocktails served in the taproom.

Green works closely with brewmaster Seth Gately to create and perfect the recipes at the brewery. Gately is a chemical engineer by trade and was a home brewer for many years before lending his expertise to Point Remove.

The brewing companies Petit Jean Pilsner, Native Lager and Black Jack Pirate Ale are now available in six-packs. They have also made the Raquel sparkling muscadine wine available in cans to be enjoyed poolside or on Arkansas’s many lakes and rivers.

The team continues to expand the distribution side of the business and you can already find their products in package stores all over central and western Arkansas. Future plans include adding a kitchen for on-site food as well as renovating more of the facility to include a larger event space for hosting weddings and special events.

A little about Morgan Zimmerman.

Morgan Zimmerman works from home as a freelance writer, marketing professional, and mom to her two young children. She and her husband Paul live in Morrilton where she is active in her community as a voluteer. She has a journalism degree from Arkansas Tech University with an emphasis in public relations and has worked in marketing and public relations for agencies, organizations and companies all over Arkansas for many years. She and her family love to explore the arts, culture, and the outdoors in the natural state.

The latest trend to hit the Arkansas special event industry is mobile...

The art scene in Arkansas is thriving and many nonprofit arts and culture...