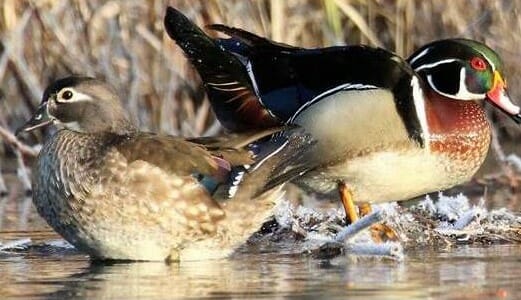 A Wood Duck’s journey from nest to lake is one of nature’s most astonishing stories. The baby duck’s coming-of-age adventure is a series of illogical actions based on instinct, blind faith, and the unquestioning bond between mother and offspring. Watching it happen is a once-in-a-lifetime opportunity.

It was one of those perfect spring days, and my wife Susan and I had invented some yard work at our lake house on Harris Brake Lake in Perry County.  I was raking the endless supply of oak leaves from a flower bed when I heard a soft thud somewhere behind me.

Not known for wildlife identification skills, Susan made a somewhat correct evaluation immediately, “That is a duckling, and it fell from a tree!” As I moved for a closer look, duckling No. 2 fell just in front of me. This new arrival shook off the effects of the landing and found the first jumper in the flower bed. As I backed away, No. 3 landed, but unlike its siblings, it landed with a thud on a rock near the landing zone. I expected the worst for this new arrival, but after a little more head-shaking, the duckling joined its siblings at what was now the staging area. Soon three more fuzzy little jumpers landed nearby and joined the group.

Still concerned that this was not a planned exit, we looked for a parent to intervene and provide some guidance for the lost ducklings. That was apparently not the plan. After reassembling in a close group, the newly-grounded family organized a single file stroll to the lake bank about 20 yards away.

Upon their arrival at the water’s edge, the six little travelers simply gathered on a flat rock and waited. None of the siblings seemed disturbed or anxious as they stood in close order, similar to children at a school bus stop. The only sound was a faint squeak somewhere down the shore.

Unfortunately for the children waiting to be picked up, a fishing boat arrived a few yards away. The fisherman in the bow cast his bait within a few feet of the little traveling party, but the ducklings never flinched. The fishermen soon moved away, and the wait continued, with the squeak from the tall weeds now obviously meant for them.

After about an hour, mom arrived, and with some kind of silent signal indicated that the ducklings should join her in the water for their first swim. We last saw the family heading for open water, the dull brown adult female and six little followers.

As soon as the landing zone was clear, we realized Susan’s assumption about falling ducks was only partially correct. The ducklings had not fallen. They had jumped from a woodpecker hole about 40 ft. up a nearby oak tree. Our little family was Wood Ducks, and the ducklings were following an unusual innate instinct to jump from a perfectly safe nest to an unknown destination far below. Being a witness to the epic journey is an extraordinary experience.

Unlike the migratory ducks common in the Natural State, Arkansas Wood Ducks are year-round Arkansans and spend winters near their summer homes. Once almost extinct in the South Central United States because of overhunting and lack of habitat, Wood Ducks have made a significant comeback over the last 50 years. They can be found from Ozark Mountain streams to back-country beaver ponds. They are more prominent in South Arkansas, but they make up a significant percentage of the state’s waterfowl population statewide.

The Wood Duck drake is one of Arkansas’ most spectacularly beautiful waterfowl. The magnificently colorful male is adorned with a green crest, yellow sides, a blue swatch on his wing, and an orange bill. In contrast to the regal male, the female is somewhat drab, mostly light brown with a white teardrop around her eye.

Unlike the ground-nesting habitat common to most Arkansas duck species, Wood Ducks choose woodpecker holes, hollow trees, or human-made nesting boxes. They lay their eggs in these unlikely locations, often 50 feet or more off the ground.

In their natural seclusion far above the shore, the ducklings hatch and almost immediately answer the call to leave the protection of the nest for an unknown world below. Wood Ducks are equipped with claws on their web feet perfectly suited for climbing up to the entrance and making their leap of faith. It is easy to imagine the hesitation of the young ducklings when they get their first look at the task ahead, but their siblings give those who linger a motivational nudge. In a combination of free fall and awkward glide, they somehow plunge safely to the ground to start the life they are meant to live.

While many Arkansans will enjoy watching the family duck parade of an adult followed by a line of young ducks, few will have the opportunity to witness their first day as ducklings. The Wood Duck’s first journey from its nest is an amazing story of starting life with a leap of faith.

0
0
The 1934 World Series: The Deans and Schoolboy Rowe
Jim Yeager

Baseball is designed to be a leisurely game, played outside on warm...