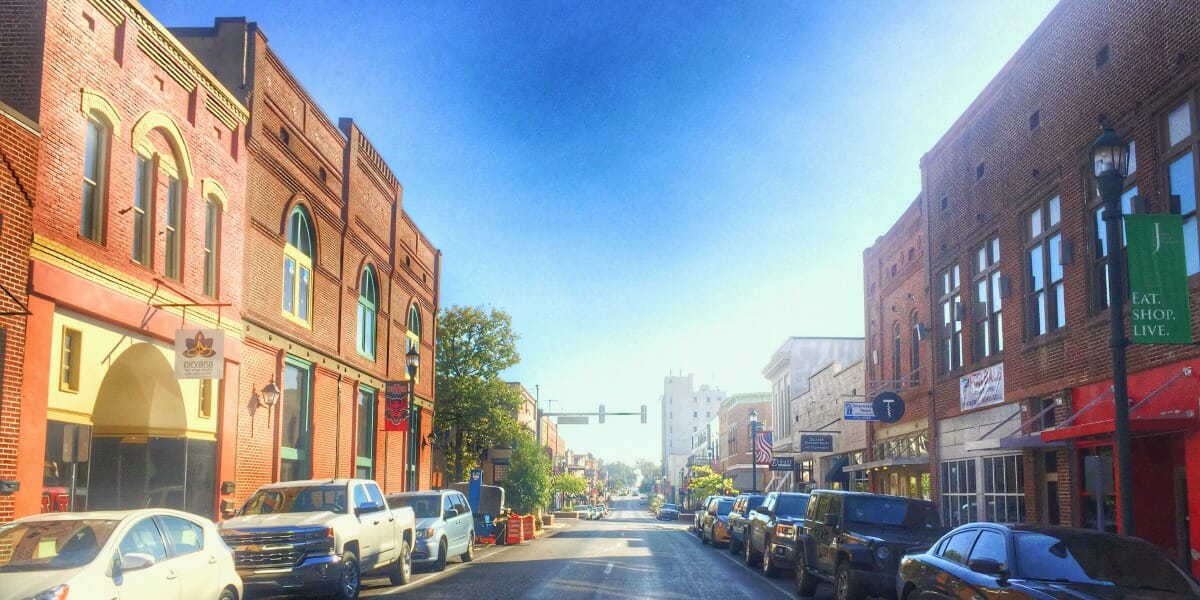 Downtown Jonesboro is growing and changing by leaps and bounds. It is becoming more of a destination, rather than a place you pass through on your way to other parts of town.

We are living in the time of the smartphone and social media. Whether it’s Instagram, Snapchat, Facebook or another platform, we love to take photos and selfies. Jonesboro is full of great places for photo ops and selfies.

The culture of the downtown area pays tribute to its rich history while also making room for the future. Downtown Jonesboro is a great place to be.

Downtown Main Street is itself a picturesque place. The face of downtown is changing daily as they work to bring new life to an area of town that has survived since the late 1800s. Downtown Jonesboro is a thriving arts and entertainment district. While you’re checking out the latest play at the Forum or listening to the hottest new band at one of the local restaurants, be sure to snap a picture of the beautiful downtown area.

In the late 1800s and early 1900s it was common for advertisements to be painted on the brick exterior of buildings. Painted with oil-based paints that likely contained lead, many of these advertisements still remain today. Having been exposed to the elements for a hundred years or more, many of these signs are faded “ghosts” of their former glory. True Ghost Signs are rare and hard to come by. Often unknown signs are discovered when an adjoining building is demolished.

Downtown Jonesboro is home to several ghost signs but none more spectacular than the Coca-Cola ghost sign on the corner of S. Main St. and W. Burke Avenue. The building, which now houses Cregeen’s Pub is the former home of the Bell Pharmacy which closed in 1930. It is believed that the original sign was painted in the early 1900s. What remains today is a beautiful reminder of days gone by when times were simpler and Coca-Cola was only 5¢.

The Burke Street Mural is one of the newest beautification projects in downtown. Painted during the summer of 2016, the project is called “Fearlessly Brilliant” and was modeled after an old fountain in the downtown area. Students and faculty from Arkansas State University worked on the mural for about four weeks.

James K. Johnson taught in the Art Department at Arkansas State University from 1970 to 1978. His 25 foot tall sculpture was built in 1977 as part of a Downtown revitalization project and was sponsored by the Rotary Club.

The sculpture is constructed of 10-gauge Cor-ten steel. Cor-ten is a steel alloy and is commonly used among sculptors. Cor-ten does not need to be painted and remains stable despite its rusted, weathered appearance. Cor-ten is also often used in architecture and ship building.

“My primary intent was to create a work of art that would serve as a focal point where people could gather as they engaged in the normal activities of business, shopping and socializing.”

As the Downtown area undergoes another revitalization, it is poignant that his work sits at the center. You can read more about James K. Johnson and view other works by him on his website.

The Veterans Monument is located on the grounds of the Craighead County courthouse. While there are several monuments and markers adorning the lawn, perhaps none is more important that the “American Doughboy” statue. The statue was built to commemorate World War I veterans. The statue is historically important because it was the first WWI monument built in the south and one of the first in America.

Gearhead has been a part of Downtown Jonesboro for nearly 15 years. Blue and Palmer are the resident dogs and love being spoiled by customers and window shoppers. Go say hello to these two cuties and grab a picture or a selfie with them if you can. They don’t sit still for long!

2 responses to “6 Photo Ops and Selfie Spots in Jonesboro”