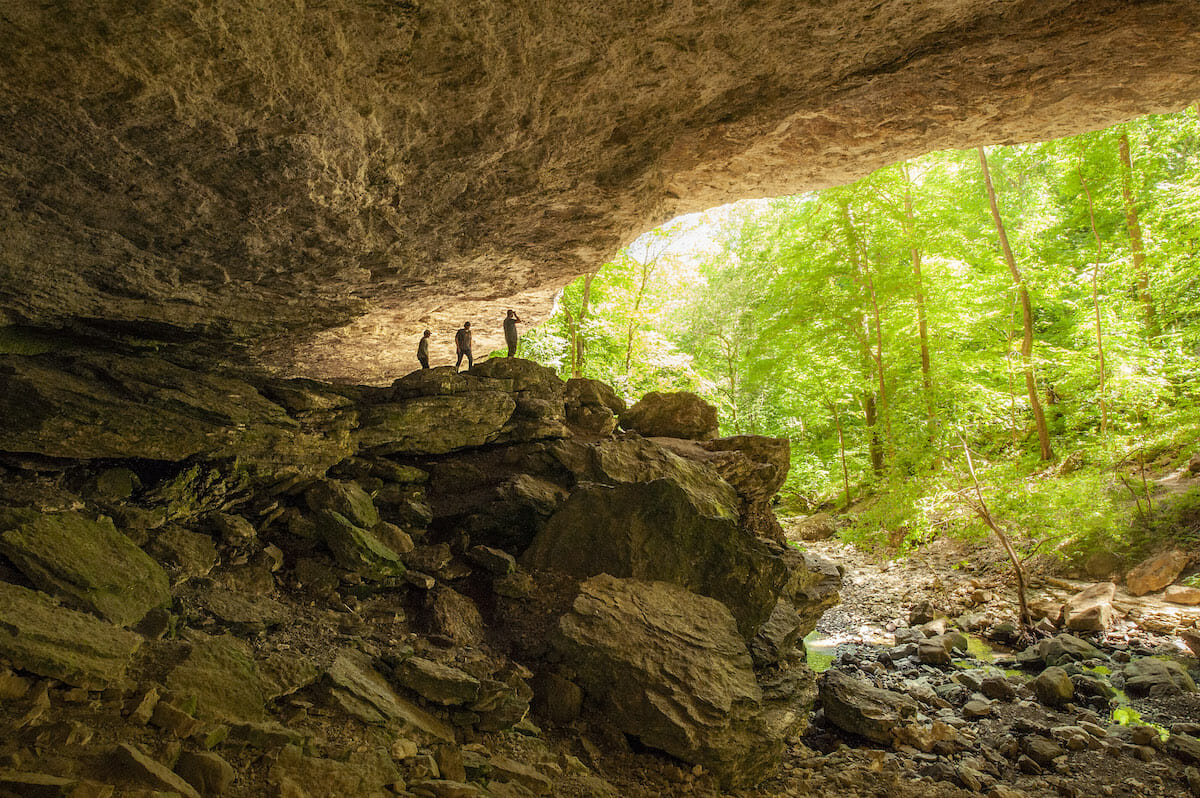 People have inhabited the lands of Arkansas for thousands of years. Whether during prehistoric or historic times, the need for shelter was essential. Limestone and interbedded sedimentary rock strata found throughout the Ozarks helped form caves and overhangs that provided shelter to humans and animals for at least 10,000 years. These caves and overhangs often called “bluff shelters,” or “rock shelters” are common throughout the Ozark ranges. The Arkansas bluff shelters provide a window to the past and are one of Arkansas’s most important archaeological resources.

What is a Bluff Shelter?

Unlike most mountains that were formed through a process called folding and faulting, the Ozarks were formed primarily by erosion. This unique process has led to the creation of many geological wonders and unique rock formations throughout Arkansas. Bluff shelters are a perfect example of this. As larger rock structures were subject to water seepage, smaller portions of the rock layers would wear away and collapse, often leading to the creation of large overhangs, referred to as “bluff shelters.”

The earliest written record indicating the use of bluff shelters in Arkansas is dated 1541. Developing a picture of who used these shelters for as many as 9,000 years before that is mostly done by piecing together artifacts that have been collected from various shelters around the state.

In the 1930s, many organized excavations of bluff shelter sites began, and artifacts were collected. At the time, archaeologists began referring to those who used the bluff shelters as “bluff-dwellers.” As it turns out, groups that occupied the areas moved and changed over thousands of years and pinning a single name incorrectly excluded those who used bluff shelters from their neighboring cultures. Archaeologists have been able to formulate a timeline of prehistoric and historic peoples, but it is ever-changing as new discoveries are made.

Why are Bluff Shelters Important?

For many thousands of years, bluff shelters provided a dry, safe place for people to congregate. Archaeological evidence shows the shelters were used during prehistoric times as campsites, storage units, burial grounds and sacred spaces. Historic people used them as shelters and barns, and the shelters served as a great place to hide moonshine stills.

The bluff shelters’ dry space created an environment that was perfect for the preservation of artifacts and serve as important sources of information and knowledge about the peoples of Arkansas’s past. While being able to study and explore that information is important, research has also indicated that native people used bluff shelters for spiritual purposes. Many contemporary Native American tribes, such as the Osage and the Caddo Nation, feel a deep connection to these bluff shelters, which may have served as a final resting place to their ancestors.

Long before systematic excavations of many of the bluff shelters began, they were subject to looting, a threat that has not disappeared with time. Sadly, recent times have seen an increase in shelters being used for illegal drug use and production of methamphetamines. Often, individuals visiting the sites for these purposes will participate in illegal excavation in hopes of finding something of value that can be sold on eBay and even the black market. This problem is not unique to Arkansas and occurs in caves, shelters and similar sites all over the country.

Unauthorized excavation of sites which are located on federal property can lead to felony convictions, jail time and hefty fines. In 2015, a Crawford County man was arrested on charges related to illegal excavation of several sites in the Ozark-St. Francis National Forest. The man pleaded guilty as part of a plea bargain and later sentenced to five years of probation, fined $2,500 and was required to pay $12,500 in restitution. He also had to relinquish over 2,800 artifacts that were found in his possession.

While archaeologists can gain some information from collections of artifacts, putting them in context with where they are discovered as well as the relationship of different artifacts to each other can provide archaeologists with a bigger and more precise picture of history. Archaeologists are experts at interpreting contextual clues, so protecting these sites provides researchers with a better understanding of the history.

Most of Arkansas’s bluff shelters are located on private land. Archaeologists and landowners go to great lengths to protect these shelters and keep their location secret from the general public in hopes of protecting them for further research and so they are around for future generations. Several bluff shelter sites are actively monitored and protected and are accessible to the public. Be sure to review trail maps and park rules before visiting any of the publicly accessible bluff shelters. Some hikes are strenuous and several do not allow pets.

Located in the lower district of the Buffalo National River, the Indian Rockhouse Cave has been protected as part of the National Parks System since 1972. The hike out to Indian Rockhouse is moderate to strenuous, but the reward is fantastic. Visitors will see a sinkhole, waterfall, mine prospect, Panther Creek, sculpted bedrock and a quarry. Two impressive features include the “skylight” caused by erosion in the arch of the shelter and a large spring that emerges from the back of the cave and then disappears underground. Check out the National Park Service Buffalo River Lower District Hiking Guide for more information.

Located in the upper district of the Buffalo National River, Cob Cave is a massive 200-foot bluff shelter. The easy-to-moderate trail is nearly 2 ½ miles roundtrip and rewards hikers with views of an 8-foot waterfall flowing into an emerald-blue pool of water and a 53-foot cascade known as Eden Falls. Check out the National Park Service Buffalo River Upper District Hiking Guide for more information.

The quarter-mile hike to the Rockhouse Cave is easy, but visitors must cross some rocky footpaths. Visitors are treated to views of the unique turtle rocks and over 105 images of rock art on the walls and ceilings of the shelter. Check out the Arkansas State Parks Rockhouse Cave Trail Guide for more information.

Not to be confused with the bluff shelter located in the Buffalo National River area, Indian Rock Cave also goes by the names of Edgemont Cave and Indian Rockhouse. This impressive shelter is located on a golf course in Fairfield Bay and is the most easily accessible bluff shelter. Estimates say this cave has been used for roughly 8,000 years. The west side of the cave contains a collection of Native American petroglyphs carved in the 1700s. Access the bluff shelter by arranging a ride on one of the Log Cabin Museum golf carts. Parking is available at 331 Snead Drive, Fairfield Bay. Or you may contact the Log Cabin Museum at (501) 581-1638 for hours and more information.

Header photo courtesy of Arkansas Department of Parks and Tourism