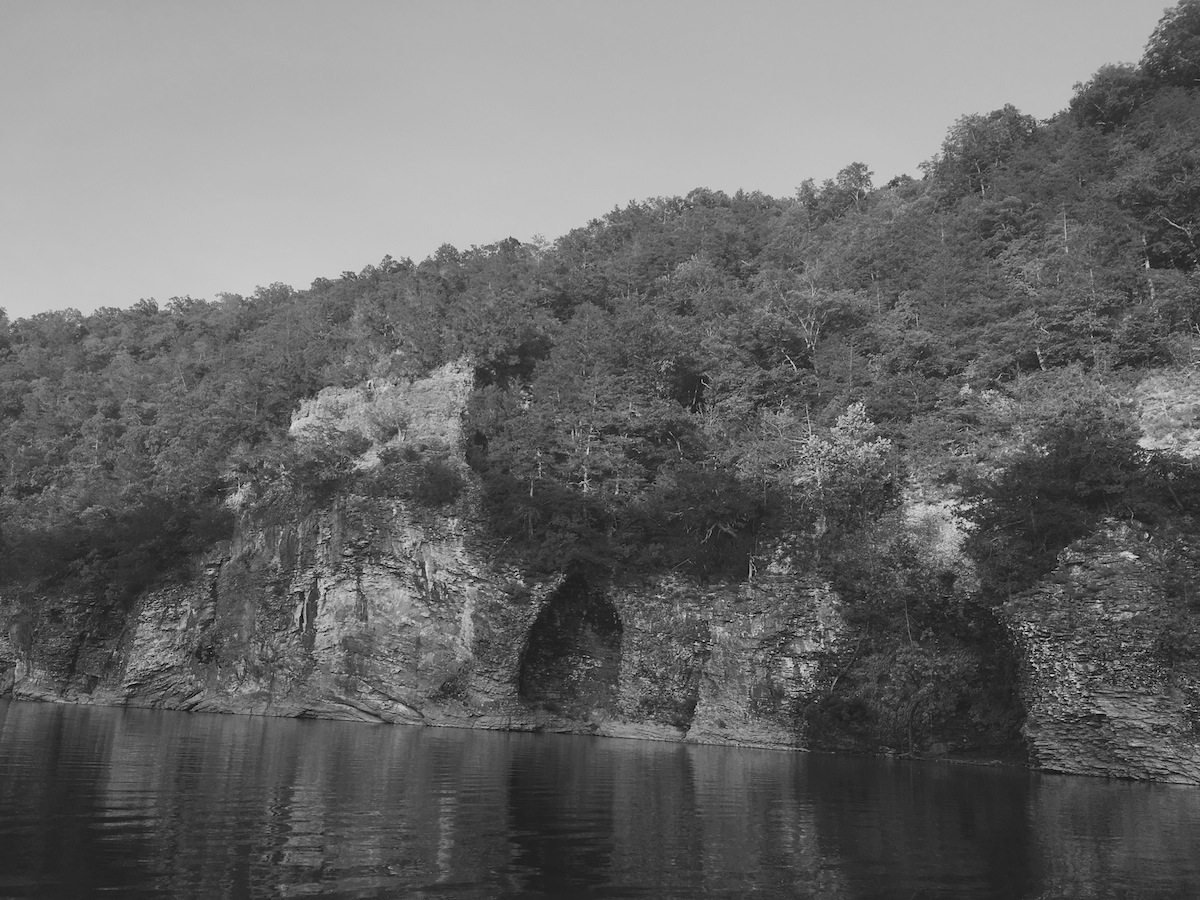 Once on a kayak trip, a friend of a friend overturned the kayak I had loaned him. We barely noticed him slip quietly into the water, a deep pool of the Buffalo River, and in his panic he nearly lost the kayak and could have harmed himself. “RIP Buddy,” we joke when we pass the location where the friend, “Buddy,” had his unfortunate incident. Accidents and injuries happen, and people have lost their lives on the river. Nature is unfathomable and powerful, sometimes overcoming the humans who seek to enjoy it. But sometimes, there’s something else to fear on the river…

On a recent Saturday, I drove my truck to the Buffalo River with a couple from church, Jamie and Chase, to meet my friend Megan. We were going to kayak from Woolum to Baker Ford, a 10.9 mile stretch of river none of us had floated before. We had experienced several setbacks that day, so it was already afternoon as we parked Megan’s SUV at Baker Ford and then drove down the gravel road toward Woolum landing. Rounding a corner, we found the path ahead blocked by a dusty old pickup truck. I stopped and the other truck pulled slowly up to my window.

“Which way to town?” the driver asked me in a gravelly voice with a country accent. I indicated the direction to St. Joe, feeling funny acting as a guide in a place I was visiting for the first time.

“S’been too long,” he admitted. He drove away and dust drifted into the cab before I managed to roll the window up all the way. I continued driving, feeling a little disturbed with the implication that he lived so isolated from the society of others that he had forgotten the route to the nearest town.

We parked the truck at Woolum and were on the river just after 2 p.m. The stress of planning melted away as soon as I was in my kayak floating comfortably in the water and feeling the wind curling against my face. Except, the wind was blowing so heavily and there was no current in the river to speak of, so progress was limited in the extreme. The river was placid, smooth like a mirror except when the wind disturbed its surface. Conditions were so much against us that I pulled out my old rumpled river map to compare to the map app on my iPhone, wanting to double-check that we were going the correct direction even though I was sure we were. My phone had no service. A bad feeling began to develop ominously in me—we were going too slowly and had too far to travel for as late in the day as it was—but I quelled my anxiety and told the others we would need to keep a good pace.

It was a beautiful day, tinged with a foreboding chill. For almost three hours we paddled into the wind, enjoying ourselves with the exertion. I reasoned that an average float speed is 2-3 mph and with the work we had put in, we must have gone at least half way. My only real concern was being on the river at nightfall, but at the same rate of travel we should certainly finish well before then. Periodically I checked my phone for service. We stopped for a break to eat and swim. Chilled, we returned to our kayaks and resumed our trip. I reflected that we had seen no other kayaks or canoes on the trip, which was odd even though we were on the river late in the day.

It was getting cold, and nightfall was in two hours. To my amazement and relief, I suddenly had cell service. My phone sluggishly loaded the map app, revealing that we had barely gone halfway. We had 5 miles to go and our speed had been so miserably slow so far that, for the first time on a float trip, I despaired of reaching our landing by nightfall. We were all tired from paddling in still water for so long, but collectively picked up the fastest speed we could manage.

A little while later we turned a bend and noticed a white Jeep parked at the edge of the water, pointed toward the river. Two people sat in the front seats, also facing forward at the water. From a distance, I turned my head toward them and raised a hand, but they stared stonily at us, immobile as if they were mannequins, and I stifled my greeting. As we passed in front of them, I found myself skirting to the opposite side of the river, as far from them as I could, feeling nervous without realizing why. The white Jeep suddenly roared to life and sped off into the woods behind it.

A minute later, we were being shot at.

The telltale crack of a gun firing startled us. It was close. Too close. Around us, bullets whizzed through the trees on the bank along which we still paddled, and several plunked into the water between my kayak and Jamie’s. I was frozen in fear. We had been shot at. I considered that it was an accident, that people camping nearby were simply being careless with their fire and didn’t realize we were there, but I also remembered how strangely the people in the white Jeep had behaved. They must have been camping with the others, and they had clearly seen us and then returned to camp. Why wouldn’t they have warned the person firing the gun that kayakers were in his path? Unless we had run amok of lawless, immoral people who may be intoxicated or simply cruel.

With that thought came the realization that the shooter may resume firing. The gunshots had been rhythmic, as if a clip of ammo had been fired. My mind processed sluggishly. I was terrified. I began paddling harder than I have ever paddled in my life, pushing with long deep strokes against the unhelpful water. Chase and Jamie also began paddling rapidly, but Megan lagged behind with a heavier paddle.

Suddenly, the river ahead split around an island, separating our group in our haste to paddle away. I was alone. I still paddled furiously, afraid that we were being hunted by renegade ruffians who sought to make sport of our little neon kayak fleet. The island was longer than I had assumed, longer than any island I had ever encountered on the Buffalo. I was alone, the sky was overcast, the sun began to set and every rustle in the woods terrified me. Cell service had vanished again.

My fears were only partly relieved when the island ended and I caught up with my fully intact friends. The rest of the trip was a stressful anxious race against the oncoming night. Finally in the twilit dark I spied the landing at Baker Ford. I could almost fall to the ground and kiss the rocks underfoot, but time was of the essence still. Horseflies swarmed us in the dark as we struggled to secure the kayaks to Megan’s SUV with hands shaky still from fear and cramped from grasping paddles. We still had to drive to Woolum to collect the truck.

On the drive to begin our float earlier that day, I hadn’t noticed how long it had taken to drive from Baker Ford to Woolum. We were all ready to be gone from the wilderness, to be on the highway and to be home, safe. A shape moved in the road ahead all of the sudden, with inhuman speed: it was an opossum, its eyes gleaming meanly in the headlights. I relaxed again, only to be startled next by a covey of quail crossing the road, and then by an unnervingly large dark bird. It refused to move for us and glared back at the car lights, finally shuffling back with its wings outstretched threateningly as the vehicle edged around it. Resuming the drive, we rounded a bend only to break hard for cement flowerpots, set out for some bizarre reason in a formation blocking the road. They hadn’t been in the road when we had driven down it that morning, which made the hair on the back of my neck rise. Why would flowerpots be placed in the road to block traffic? We maneuvered around them carefully and I watched for someone to rush out of the bushes or nearby house toward us.

The drive back to Woolum took 40 minutes, and once we reclaimed the truck we still had to backtrack to head home. I didn’t breathe a sigh of relief until I was on Highway 65, and even then I felt jittery and suspicious of strange shapes in the dark. Although nature can be dangerous and we had risked having to camp after dark, it had been creepy unknown fellow humans that had most threatened my friends and me on this trip.