Six Things to Do on a Weekend in Jasper 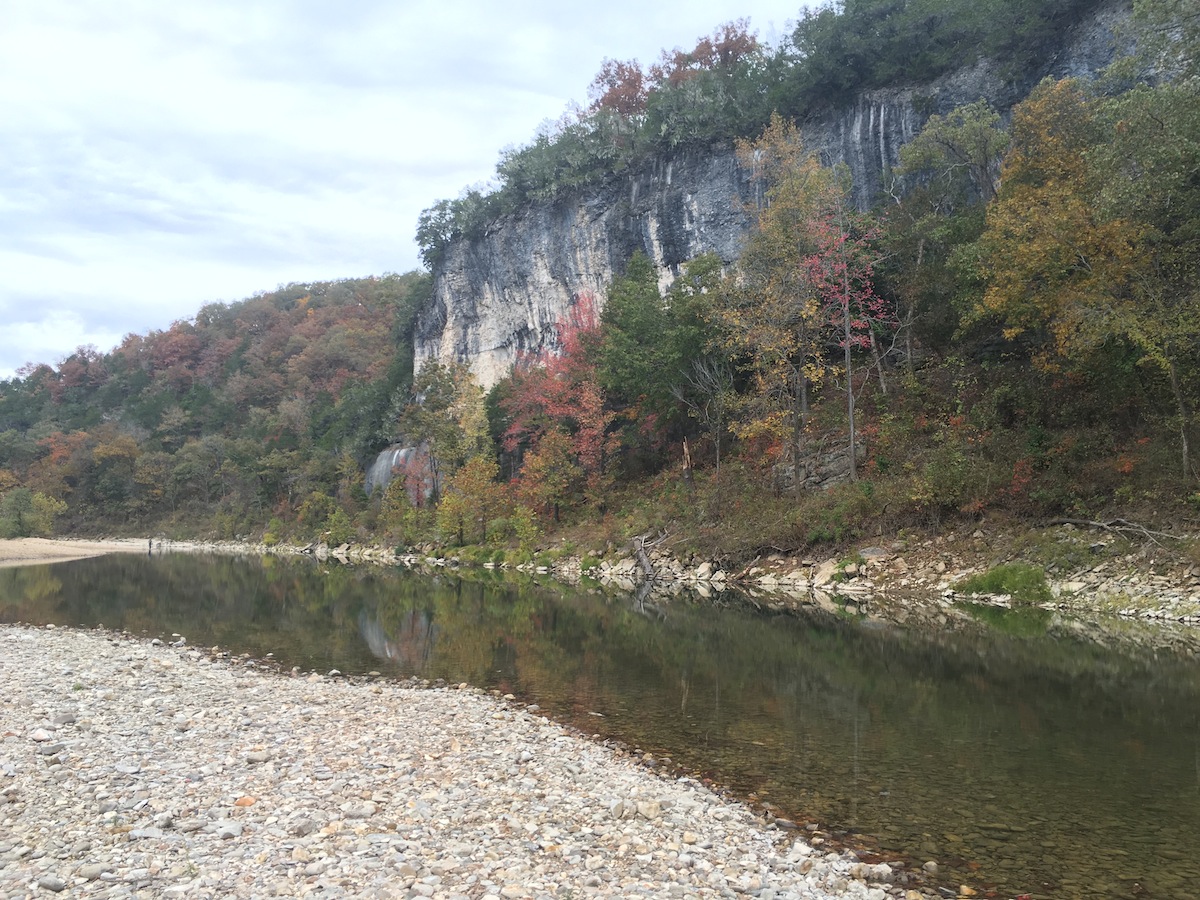 I managed to fit in half a dozen kayak trips and one real float trip (with four canoes, ten people and two coolers) on the Buffalo River this summer, traveling from Ponca to Gilbert in a fractured set of trips that had me repeating sections of the river. Since the leaves started changing I had been aching to return to the river and revel in fall. My husband Garrett and his coworker Jhooné felt the same way. This was my third time since May kayaking Tyler Bend to Gilbert, a 5.6 mile trip easily completed in a few hours.

The park at Tyler Bend was loaded with deer. Jhooné even reported hearing an elk while waiting for us. It was a beautiful fall day: cloudy and gray, setting off the brilliant trees masterfully. The surface of the river before us rippled, sometimes dimpled with falling leaves, and the trees were growing steadily barer with the wind’s persistent attentions. As we approached the bridge for Highway 65, the water seemed like a perfect unblemished mirror.

Garrett soon slipped out his Tenkara fly fishing rod and began teasing the surface of the water for fish. His efforts were foiled by the wind, and he reluctantly put his rod away. At a spot where the bluffs became a slight cave area, we paddled closer to inspect it. Our voices echoed alarmingly and the water made a peculiar slurping noise as it slapped the bottom of the rock. A compatriot on a previous trip had flipped a kayak in that location, the only kayak flip of our experience, so we paused for a moment of silence before the creepy sucking noise from the water in the cave drove us out.

While the water was very low, I noticed that certain areas were much deeper than they had been on previous visits. I can’t account for why this is, except that the areas that had increased in depth were already the deeper stretches on the river to begin with. The kayaks scraped bottom several times. We had the option of getting out and carrying our kayaks, or shifting weight and scooting until we made it back to floating depth. Since the water was cold and the air a chilly breeze, I elected to scoot and not get wet. The scooting wore me out more than actually paddling the kayak, and I know I looked ridiculous doing it.

We didn’t see any other kayaks or canoes. A few people briefly visited the park at Tyler Bend while we were unloading the kayaks, and we saw a young family of four skipping stones around Grinder’s Ferry. As we journeyed down the river, occasionally we saw cars parked on the banks. One car arrived as we were in an especially picturesque bluff site; it drove as close to the river as it could and rolled its windows down. Two long cameras loomed out of the windows, aimed at us, and began shooting photographs. Then, four people got out and approached the shore, each taking pictures still. I felt like a celebrity.

“How y’all doing?” I called, my casual greeting when on the river.

They were fellow Arkansans, so they responded with like vocabulary: “Y’all look so nice on the river!” A woman said, indicating her camera.

“It’s a great way to enjoy fall,” I agreed, and we paddled on.

As we approached Gilbert, we began to encounter an amazing phenomenon along the river: fish, dozens of them, were making rapid flapping movements and hopping straight out of the water, creating an astonishing visual popcorn concept and a gentle susurrus. I laughed in wonder of the quizzical scene.

At the end of our trip, I consulted my well-worn map of the Buffalo River with Jhooné, pointing out where we had started and ended. It’s the same map I’ve used all summer for hiking and floating the Buffalo, as well as for driving directions to the sites. The map had become weak at the seams from so much repeated folding and exposure to water, and it finally separated at its main crease. I’ll have to get a new map in the spring.