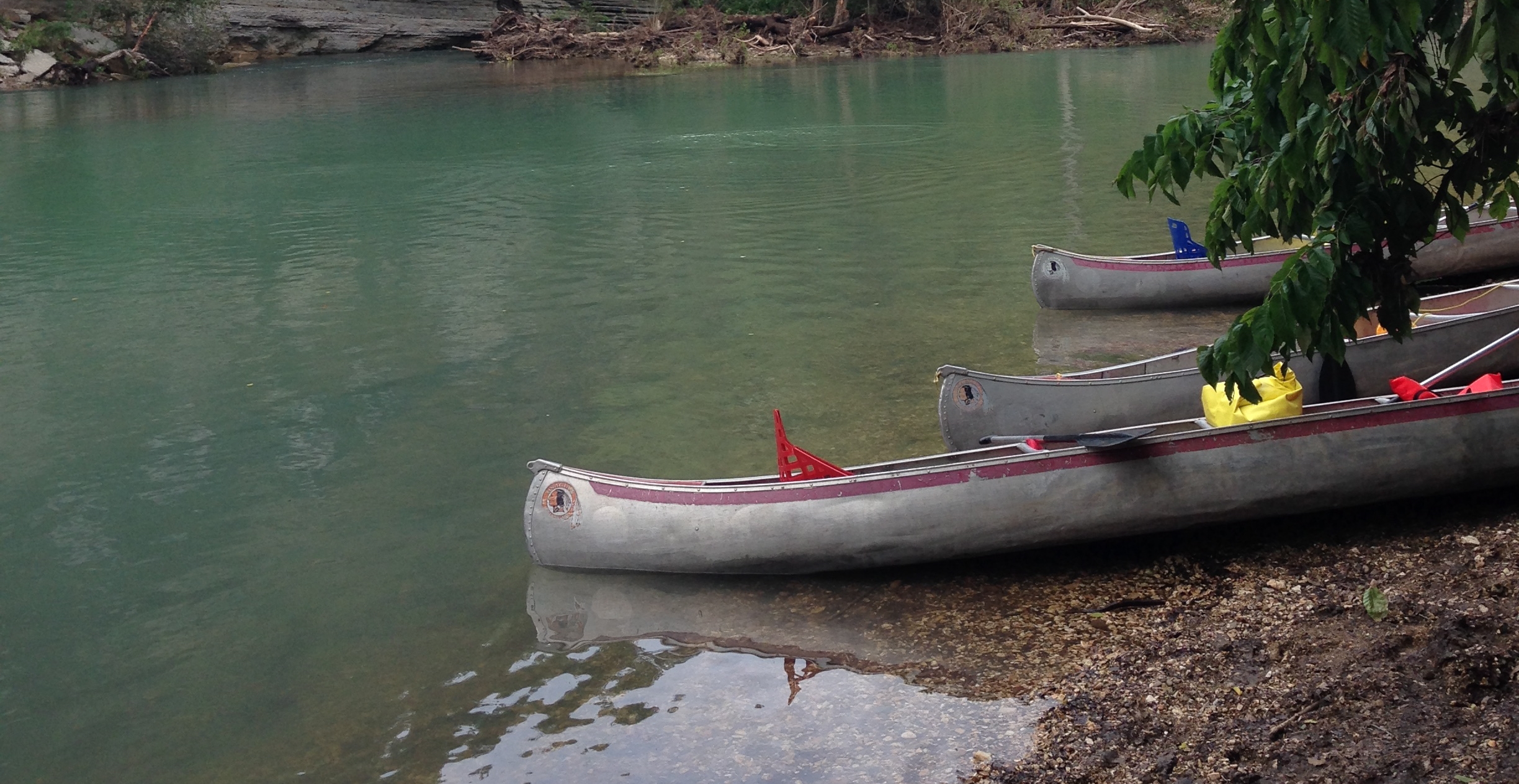 I wasn’t familiar with the phrase “float trip,” used to describe a canoe or kayak trip on a river, so when my husband Garrett told me his family was planning a float trip on the Buffalo River, I pictured us in canoes floating—that is, riding suspended in the water and not needing to do much paddling. It sounded fun. If they had called it canoeing, I might have gotten the right idea for the trip. As it was, I barely survived my first Arkansas float trip.

We were a group of ten in four canoes. Two of the canoes held a second person: Garrett’s nine year old sister Cassie rode in the middle of our canoe, and my sister Delaney, who was sick at the time, thought she would be okay to take it easy in the middle of another canoe with two of Garrett’s brothers. We put the aluminum canoes in at a launch site in Ponca; it would be about eight miles winding with the river through forests and tall, striated bluffs. My canoeing skills were rusty, but I really didn’t expect to need them.

I sat in the front of our canoe. Immediately after launch, I realized I did not remember how to direct the canoe. As we approached the first set of small rapids, Garrett yelled for me to “paddle, paddle!” I took desperate swipes at the water, switching sides, and only seemed to make the situation worse. We floated sideways and smacked up against rocks. The canoe with Garrett’s brothers and Delaney in it t-boned us with the force of a torpedo. Both of our canoes tipped over. No one was hurt, but Delaney and I were scared and we were all wet and cranky.

Soon, Garrett and I were arguing about our mishap. I was anxious because I had just realized that what I thought would be a laid back trip was actually intense and potentially dangerous, and I was worried about my sick sister. It bothered me that everyone called it “floating” when we were actually doing a lot of work. Garrett was frustrated that I couldn’t get the hang of steering the canoe so that we didn’t continually crash into rocks and scrape the canoe’s bottom on shallow areas. It was embarrassing to be publicly fighting. Norman, a friend of the family, chose that moment to make a joke about couples preferring one-person kayaks to canoes because they “save marriages.”

Once I got the hang of paddling and directing the canoe, I sulked and paddled rapidly, trying to bring an end to the trip. We stopped on a slender rocky island for lunch. Heavy rope-like vines hung from the trees on the shore and my brother-in-law Aaron used them to swing out over the water, cackling delightedly. Smooth, flat stones perfect for skipping populated the island. On top of the high bluff on the opposite side of the river there was evidence of an old house with its stone foundation and a proud chimney standing still.

As we resumed the trip, my mother-in-law tried to thaw me out by drawing my attention to the beautiful wooded scenery and the dappled sunlight sparkling on the water, interrupted by gentle paddle strokes. It was late spring and chilly, and turtles were taking advantage of the heat provided by sun-warmed rocks along the banks. It was impossible to ignore the beauty of the river, and when I was able to successfully navigate rapids and speed around bends in the river, I found it fun and rewarding.

At one of the rapids, huge boulders crowded the river and a large tree had fallen partially into the river on one bank, creating an additional obstacle. We tried to pick a careful path, but the current pulled the canoe faster than we could counter with rowing—finally, we were floating. We gathered speed and were fired like an arrow straight into the fallen tree, unable to alter course. The tree scraped long scratches down my lap and hit me in my chest. I was knocked off my seat straight back into the canoe, and my body acted as brakes in bringing the canoe to a stop.

“Bug! Are you okay?” Garrett called, using my pet name. I was shaken and a scraped up. I feared the impact had cracked my ribs. A little way down the river, we paused and took stock of my injuries. They were surprisingly minor, but it could have been much worse: I could have been seriously injured, crushed against the tree.

The last mile of our trip seemed to have fewer rapids after my run-in with a tree, and we were able to relax. Garrett baited his fishing rod and began casting from the canoe as we slid along the river, trying to catch some of the large fish we saw resting at the bottom of the river. At one point, the canoe caught the bottom in a shallow portion of the river, and we started to tilt. Fearing another tipping event, Cassie leapt like a cat straight up from the canoe and stood off in the shallow water apart from us, leaving us to our fate. When the canoe failed to tip, we teased her for being so quick to ditch us, like a fair-weather friend.

We were exhausted when we arrived at Kyle’s Landing and hauled the canoes out of the river. After publicly fighting with my husband, being bested by the river, crashing into a tree, and seeing my sick sister knocked around, I was humbled. Delaney and I reunited in amazement at both our survival and our ignorance of float trips, and Garrett and I were reconciled and began planning to get kayaks. Now when I think of my crash, I see it comically, with a cartoon version of myself. My eyes bug out when I realize I’m about to crash and my body bear hugs the trunk on impact. But the crash vindicated me: I was right to object to the nomenclature of a float trip, unless it refers to floating directly into objects.