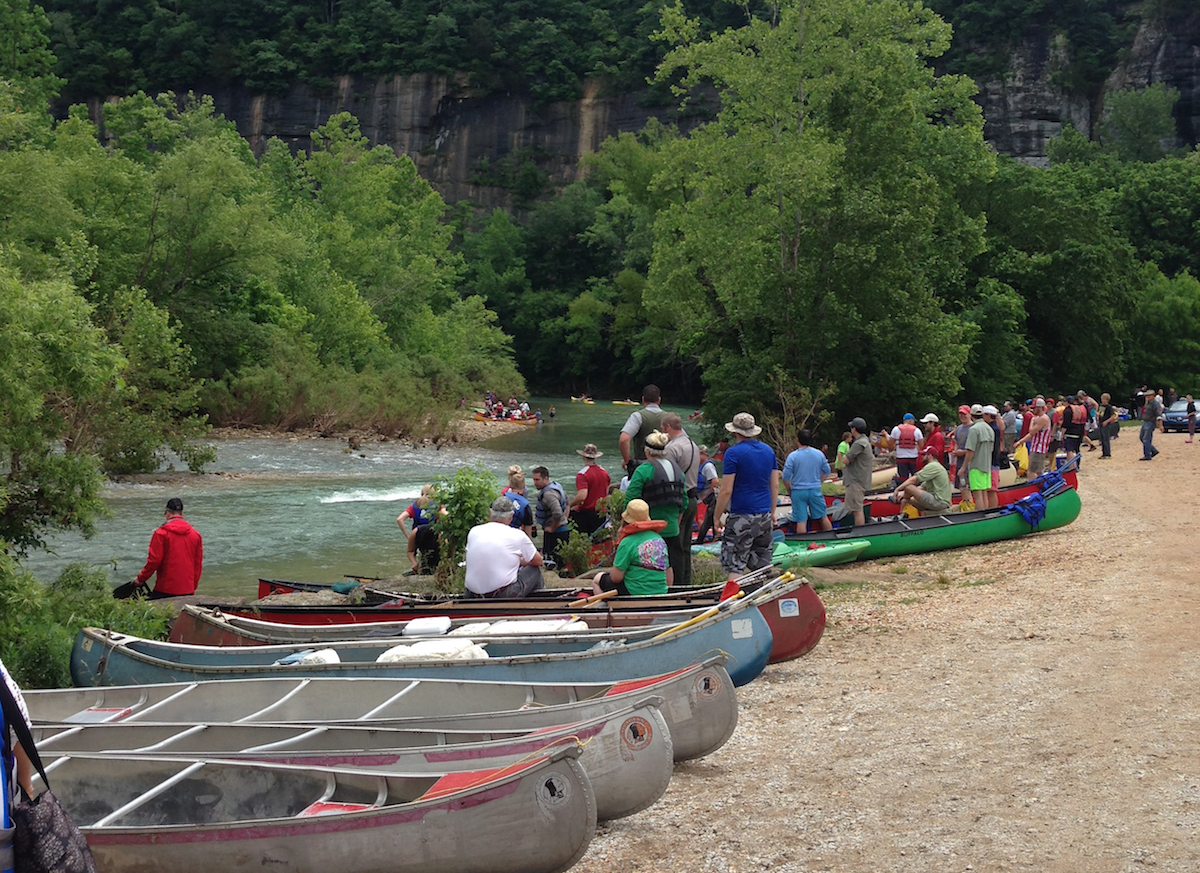 Following the documented disillusionment of my first float trip, I was anxious to return to the Buffalo River for a rematch. My second float trip occurred during Memorial weekend nearly a year later. That morning, it was raining, but meteorologists were promising it would clear up by noon. The water level was already high from heavy rainfall of the previous week, and acquaintances cautioned me to wear a life vest or reconsider going. All this promised an interesting trip that could be a repeat of the previous year’s disastrous trip—but we all determined that the float trip would be a success. I privately swore that I would not tip. Or hug any trees.

We—that is, me, my husband’s family of seven, plus two friends—put our four old and not-so-trusty aluminum canoes in at Steel Creek. The landing was crowded with a couple of hundred people with canoes and kayaks, and the accompanying transportation. Wilderness officers were on-site checking that every vessel had enough life vests for its occupants, and that children 13 and under were wearing their vests. We watched canoes launching and immediately tipping, an unpleasant way to start the trip as I knew from experience. Promising not to bicker, my husband Garrett and I shared our canoe with his teenage brother Noah. We were the first of our party to launch.

At the beginning of my first float trip, I had paddled frantically without knowing what I was doing, causing us to drift sideways and lodge against rocks where another canoe collided with us and caused us to capsize. This time, I was nervous but realized as I helped take us around a swift bend and through our first rocky area that I knew what I was doing. I felt like the Queen of the Amazon, sitting tall and making powerful strokes, riding the swift current. When I was forced to switch out and let Noah have a turn paddling, I felt like the Queen of Sheba being ferried. Another of our own canoes didn’t have our success and tipped early on, losing a watermelon of great size.

There were a lot of canoes having SOS events in the river. It was common to see ten or more canoes schooling together, and it was equally common to see canoes overturning and losing their contents, trailing a detritus of cans, bottles, paddles, clothing, and trash, despite Arkansas law that trash be contained and secure in mesh bags and that coolers be strapped closed. The river was clogged with vessels and when a canoe overturned or stuck against rocks it created a chain reaction as canoes behind it crashed into it or had problems trying to avoid the canoe in distress. At times like these, kayaks effortlessly slid around the wreckage, eliciting wistful comments from canoers in their wake. Later down the river, we encountered a pleasant piece of flotsam—the ersatz watermelon, bobbing along and chilled from the water. We enjoyed the watermelon for lunch with our sandwiches, and Noah bragged the rest of the trip that he had eaten more sandwiches than the rest of us.

We were having a successful and fun trip—that is, until we ran into a stretch of river littered with big rocks. The rocks created small whirlpools and eddies, fast currents and white water. Despite our best efforts we crashed into rocks and began to tip, so we all climbed out to haul the canoe to shore and empty the water out. The rocks underfoot were slippery and the current was swift, easily knocking us off our feet. The canoe with my parents-in-law and their 10-year-old daughter Cassie lodged between rocks near the river’s center. The canoe with my brother-in-law Aaron and his girlfriend Micaleigh crashed into them; both canoes rocked and tipped, took on water and began tumbling over the rocks. Everyone jumped out, and my father-in-law Randy tried to hang on to the canoes, dangerous in light of the possibility of being crushed or dragged against the rocks. Finally letting go, Randy allowed the river to carry him downstream to a placid area where he towed one of the canoes to shore and began collecting the paddles, cooler and dry bags. People downstream caught the other canoe and pulled it to the opposite bank.

Garrett’s family, stranded in the middle of the river, were attempting to cross to the bank. Cassie’s small face looked terrified. The danger was not only of slipping and receiving injury amid the rocks, but also of being struck by an oncoming canoe, especially as float parties around us had their own problems in this treacherous area, crashing into each other or capsizing. Even a sport kayak overturned. Garrett and Noah began stepping over the slick rocks to help their family. They slipped a few times, and finally the river carried Garrett, too, downstream. About this time, eight kayaking wilderness officers arrived on scene. We were relieved to see them, thinking they would check to see if we were okay and offer advice for how to get everyone out of the river. Alas, they continued without the least hesitation.

Shortly after, a couple came along and adopted Cassie into their canoe, safely delivering her to her father downstream. Sharon, Micaleigh, and Aaron picked their way cautiously to the bank. They had spent about 20 minutes stranded in the middle of the river. Sharon had lost one of her big toenails and Noah had lost one of his shoes. Somewhat bedraggled, we returned to our canoes and resumed our trip. As we continued, we heard screams and the grinding noise of canoes in distress behind us, and like Lot’s wife when leaving Sodom and Gomorrah, we looked back—two more canoes were crashing in that same location, with more heading for impact.

More wilderness officers were at Kyle’s Landing writing citations for people who had a questionable substance in their cooler. Seeing Noah’s shoe-less foot, one said, “We should charge people who lose their shoes with littering.” A tree on the shore was hung with dozens of shoes, so shoeless Noah was in good company. We were happy to be back on shore, cleaning and changing clothes in the site restroom and bandaging Sharon’s injured toe. In my first float trip, I had been crushed against a fallen tree when my canoe sped uncontrollably through rapids, and I subsequently struggled to connect the phrase “float trip,” which sounded fun and easy, with the difficult canoeing trip it actually felt like. This time, knowing what to expect made it easier to enjoy the trip in spite—and partially because—of problems on the river. I was also encouraged by the aid we received from strangers when we were in dire straits (literally). This is the value of the Arkansas float trip, and what draws so many to our rivers: the camaraderie, the fun and the challenge that not much else can compare to.