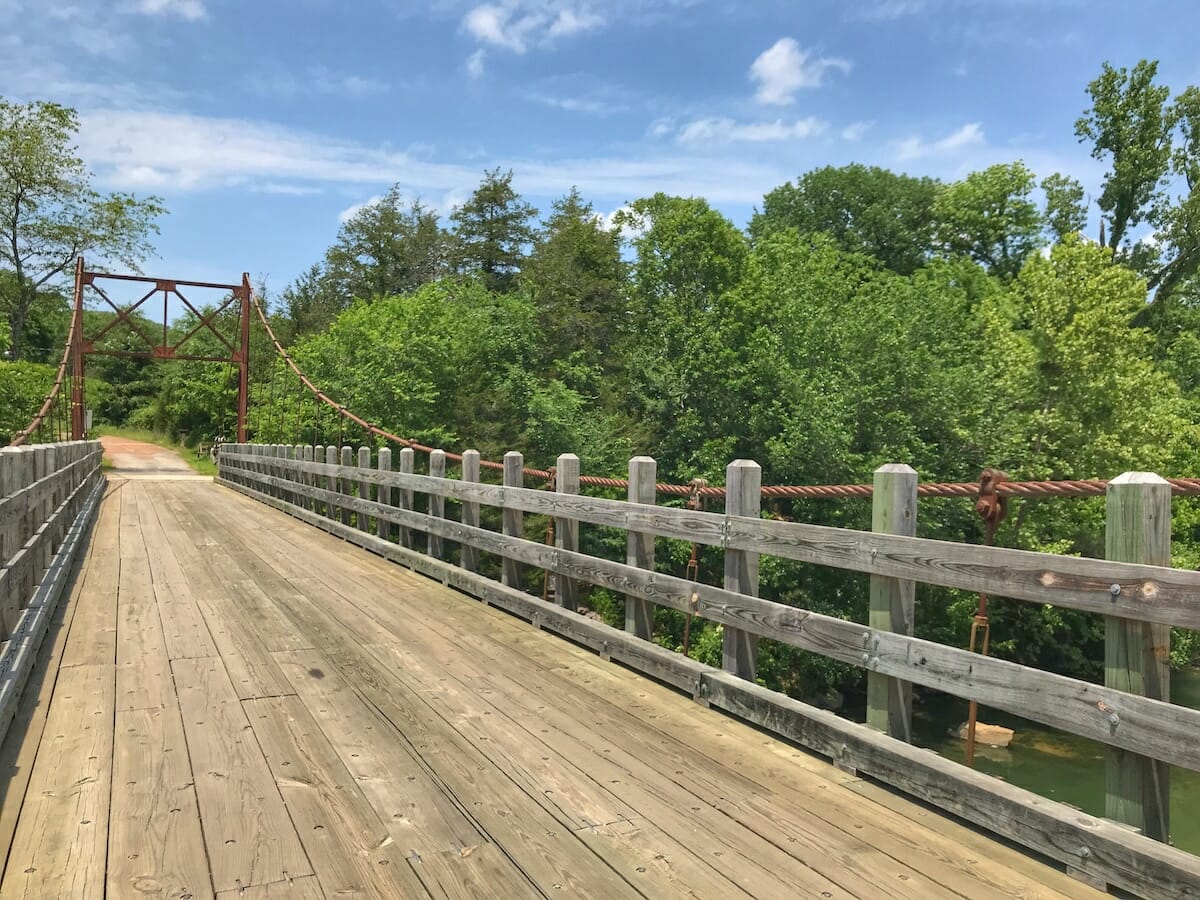 A recent Saturday morning drive took us to Mountain View, a community my family and I have regularly visited over the last 20 years. We planned to head north and take a drive along the Sylamore Scenic Byway, but we got distracted when we saw a sign advertising a creek-side campground. Having recently purchased a travel trailer, we veered off our intended path. And as we approached the RV park, we came upon a picturesque cable suspension bridge known as the Sylamore Swinging Bridge in Allison, Arkansas.

The tiny, unincorporated community of Allison is located just north of Mountain View at the intersections of Arkansas Highways 9, 5 and 14 and consists of a smattering of homes and a few campgrounds. The history of Allison dates back to Native Americans who first settled in the area in the early 1800s and nearly came to a halt when the town was all but destroyed during the Civil War. Although there isn’t much that remains in Allison, it was hard to believe we had never known this unique bridge existed less than five miles outside of Mountain View. Still, it hung before us on giant cables as it spanned a 200-foot wide section of Sylamore Creek.

After an initial moment of hesitation, during which we questioned the capability of the narrow, wire-cable suspension bridge to support the weight of our car, we inched our way across to a parking lot at Anglers Holiday Mountain Resort to explore the bridge on foot.

The bridge itself is a marvel. The cables appear barely strong enough to support themselves let alone be able to support massive beams, boards and the weight of several cars. As we walked across, we could feel the slight bounce, magnified when a vehicle crossed over beside us. Although the bridge has seen many changes over the years, its history dates back to the early 1900s when the first road was built through the newly appointed Ozark National Forest.

Finishing Big Flat-Sylamore road project at Culvert No. 1. Photo No. 19755A, by Ralph Huey, 1914. Permission granted by NPSHistory.com.

The establishment of the national forest created a need for access and building roads became a top priority. In 1914 construction began on the Big Flat – Sylamore Road, the first road through the Ozark National Forest.

Ralph Huey with the U.S. Forest Service served as superintendent and oversaw the suspension bridge project at Sylamore Creek. The bridge was intended to carry foot traffic, horseback riders, horse and carts, logging trucks, bulldozers and other road machinery. Although detailed records weren’t kept, a suspension bridge was likely chosen because they were often less expensive to build. Additionally, the style of the bridge would make way for the regular rise and fall of water levels and, at only 200 feet in length, the bridge could be constructed relatively quickly.

The suspension cables weighed 4,100 pounds and were first transported to Sylamore by railroad. A horse-drawn wagon then hauled the cables to the site of the bridge. Concrete anchors and stone towers were built on both banks of the creek, and the cables were suspended.

The bridge project was well-documented through photographs taken by Huey. When it was completed, Huey encouraged the workers to bring their families to the bridge so he could photograph them. Given the time and the location, this would have been a special occasion for many families. It is believed that only one of these family photos taken by Huey remains and it can be seen on a placard beside the bridge.

Sylamore Bridge. Constructed by the Forest Service and settlers. Photo No. 19756A, by Ralph Huey, 1914. Permission granted by NPSHistory.com.

The bridge served its purpose well until the 1940s when the Big Flat – Sylamore Road was designated as part of State Highway 14. New state guidelines needed to be met, so the bridge was rebuilt in 1945 by the Arkansas Highway and Transportation Department. All new steel towers, beams, and boards were put in place, but the original cable was reused for the project.

Although the bridge was designed to rise and fall with the water levels, heavy rain in late 1982 was too much for the bridge. Over 19 inches fell in a short period, and the power of the rushing waters paired with tree limbs and other debris destroyed the bridge. Considering the road was no longer a major thoroughfare, it seemed unlikely that it would be rebuilt. Its historical significance saved it.

Using the same plans from 1945 and once again reusing the same, original cable system the bridge was rebuilt. It reopened for traffic in 1985. The bridge appeared in a 1970s film called “The Bootleggers” and was added to the National Register for Historic Places Nov. 18, 1999.

In the years since it was rebuilt, there have been several occasions where heavy storms and rising floodwaters have challenged the future of the bridge. The most recent improvements were made in 2015 when all of the wood on the bridge was replaced. The $108,000 project was made possible in part by a grant from the Arkansas Historic Preservation Program and took three months to complete.

The Sylamore Swinging Bridge is one of only two remaining wire-cable suspension bridges open to car traffic in the state. (The second is the Beaver Bridge, known as the “Little Golden Gate Bridge” in Carroll County.)