The Names Behind the Buildings at the University of Arkansas 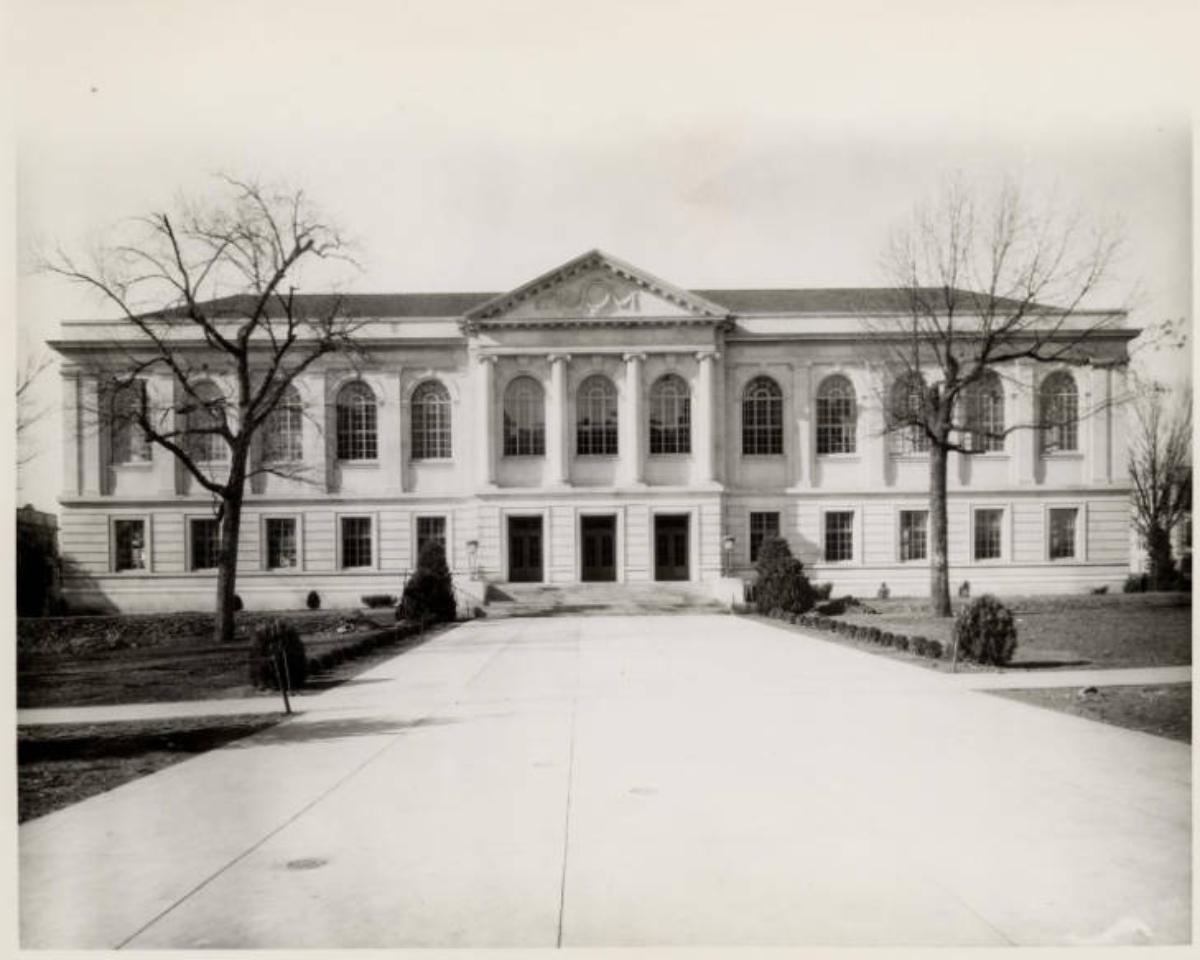 Classes were first held at Arkansas Industrial University, later renamed the University of Arkansas, on January 22, 1872, in a wooden, remodeled farmhouse on the McIlroy home site. Though this farmhouse no longer stands, the site of the first classes would later give way to many of the University’s prominent buildings. Of course, Old Main is the building synonymous with the University of Arkansas, and its construction was a grand achievement for the young university, but many other buildings on campus have provided a home and classrooms for thousands of students throughout the university’s almost 150-year history. The people behind the names that grace these halls may be forgotten, but they once shaped the direction of the school and the students within it.

Carnall Hall – The University included women from its first graduating class, but women didn’t have a dormitory option on campus until 1906 when Carnall Hall was built on the corner of Old Main Lawn. Ella Carnall was a distinguished student who graduated in 1881. She taught English and modern languages at the University from 1891 to 1895, when she died suddenly from typhoid fever. The young professor was popular with students and a role model for women on campus. Carnall Hall was designed to serve all the needs of its female occupants, with a dining hall and kitchen included, and placed far from the men’s dormitories. It ceased to function as a dormitory in the 1960s, serving a variety of purposes, but the 1990s found it empty and falling into disrepair, despite its historical significance on campus. Fortunately, the building was renovated in 2001 into the Inn at Carnall Hall, a hotel and restaurant highlighting the beautiful features of the old building.

Holcombe Hall – Jobelle Holcombe was a force on campus for many years. She graduated in 1898 and taught in the English department from 1901 to 1942. She also served as the dean of women from 1907 to 1913. Holcombe Hall opened in 1948, one year after JoBelle Holcombe became the first woman to receive an honorary doctorate.

Chi Omega Greek Theatre – Speaking of Jobelle Holcombe, while on campus as a student, she was one of the founders of Chi Omega, a women’s fraternal organization that grew to be the largest women’s fraternal organization in the world. The group began in 1895 on the University of Arkansas campus. The order honors friendship, personal integrity, service to others, academic excellence and intellectual pursuits, community and campus involvement and personal and career development. In 1930, the now national organization donated the money to build the Greek Theatre on the University of Arkansas campus, where it hosts pep rallies, concerts, and on warm days, sun-bathing students.

Vol Walker Hall – James Volney Walker graduated in 1877 and became a prominent Fayetteville lawyer. In 1923 he took the lead defense against a movement to relocate the University to Little Rock. Vol Walker Hall was at first Vol Walker Memorial Library, which opened in 1935 and served students until 1968 when Mullins Library opened. It is now home to the Fay Jones School of Architecture and Design. Vol Walker left quite an impression on the campus and the city of Fayetteville, with his obituary claiming that “had he had political aspiration, any office within the gift of the people might have been his.”

Gregson Hall – William S. “Pop” Gregson served the University in many ways, beginning in 1918 through the YMCA. In the next 30 years, he would be the secretary of student employment services, the manager of the student union, a brief stint at the dean of men, the director of religious activities and university chaplain. He was honored as an Emeritus Professor. Gregson Hall was built in 1948 and carries the moniker of the well-liked, able Pop Gregson.

Buchanan Droke/Gladson Ripley Halls – These two residence halls both carry double monikers, all for men who long served the University. The first men’s dormitory on campus was Buchanan Hall, built in 1888. When the original dorm was torn down in 1937, a new Buchanan Hall was authorized, but Buchanan-Droke didn’t open until 1954. John Lee Buchanan became president of the University in 1894 and presided over the name change from Arkansas Industrial University to the University of Arkansas. He served as president until 1902. George Wesley Droke entered the University in 1877. After graduation and a few years away, he returned to teach mathematics, logic and astronomy and became dean of the college of arts and sciences. He stayed at the University for 47 years, a tenure that certainly deserves name recognition on campus.

William Nathan Gladson came to the university in 1894, became dean of engineering in 1913, and guided the college into national standing. While at the University, he also did research on the X-ray machine and the wireless telegraph, becoming the first person in the state to operate both. Giles Ripley began teaching physics in 1908 and was the first dean of men from 1923 to 1937. He stayed with the physics department until 1940. Both Buchanan Droke and Gladson Ripley Halls were retired as dormitories in 2019, though they still stand on campus.

Brough Commons – All students must eat, and Brough Commons has long been the central cafeteria on campus. Charles Hillman Brough was a professor of sociology and economics from 1903 to 1915. He became governor of Arkansas in 1917. One of Brough’s hallmarks as a governor was ensuring the passage of a property tax for education. When it passed in 1917, it helped stabilize the finances of the University of Arkansas. When Brough died, he left his library to the university, a collection of almost 1500 books.

Gibson Hall – Gibson Hall was originally Razorback Hall, a women’s residence hall. In 1963, it underwent a remodel and acquired a new name. James L. Gibson served as the University Housing director with such outstanding merit that an award is named after him, the James L. Gibson Exceptional Service Award from the Southwest Association of College & University Housing Officers.

Humphreys and Yocum Halls – The twin residential towers have held the skyline at the University since 1961 and 1963. Allen Sparrow Humphreys was a chemistry professor from 1918 until 1956, serving generations of students. He also served as dean of men from 1937 to 1945. Judge Henry S. Yocum graduated from the University of Arkansas and returned to his alma mater for his Juris Doctorate Degree after serving in the army during World War II. He was later a judge for 18 years before retirement, and a board of trustees member during the construction of Yocum Hall.

Futrall Hall – Though John Clinton Futrall served as president of the University from 1913 to 1939, this hall is named for his wife, Annie D. Futrall, who by all accounts was a force of her own on campus. The Futralls left their family papers to the University of Arkansas library, with some documents dating back to 1835.

Hotz Hall – Hotz Hall honors Henry and Stella Hotz. Henry joined the faculty for secondary education in 1919 and became dean of the College of Education in 1934. He taught until 1945, when he was awarded Professor Emeritus status. Stella Palmer Hotz was the first full-time female professor hired by the University. She taught Home Economics from 1918 to 1925. Hotz Hall was built in 1964 and served as a residence hall, then office space, before converting back to the honors student’s residence. The priority Henry and Stella placed on education continues within the Hotz family, which endows a distinguished lecture series at the University and a dean’s chair within the College of Education.

Pomfret – James Edward Pomfret, Jr. was the vice president for business at the University from 1958-1967. He graduated with the University in 1948, after serving in the military, and became the chief accountant. When he died suddenly in 1967, he was also secretary of the Board of Trustees. Pomfret Hall opened in 1967.

Silas H. Hunt, the first black graduate student to be admitted to the University of Arkansas.

Silas H. Hunt Hall – Perhaps one of the better-known namesakes, Silas Herbert Hunt was the first black graduate student admitted to the University of Arkansas, and to any graduate program in the deeply segregated university system of the South. Silas Hunt was a native Arkansan, born in Ashdown and educated in Texarkana and Pine Bluff. As a number of students were challenging the segregation of southern universities, Hunt decided to apply to the University of Arkansas law school. Seeing the backlash and negative publicity other universities had received, University of Arkansas officials announced qualified black graduate students would be admitted. Hunt began his studies on February 2, 1948, though he was still forced to attend segregated classes. Hunt was a promising law student, but he died from tuberculosis in 1949, possibly from complications from a war wound. The University renamed Arkansas Student Hall after Hunt in 1993, and it has served as the center for student admissions since then.

The next time you stroll across the campus of the University of Arkansas and see the name of one of its many buildings, consider the people who worked hard to create the University we see today.