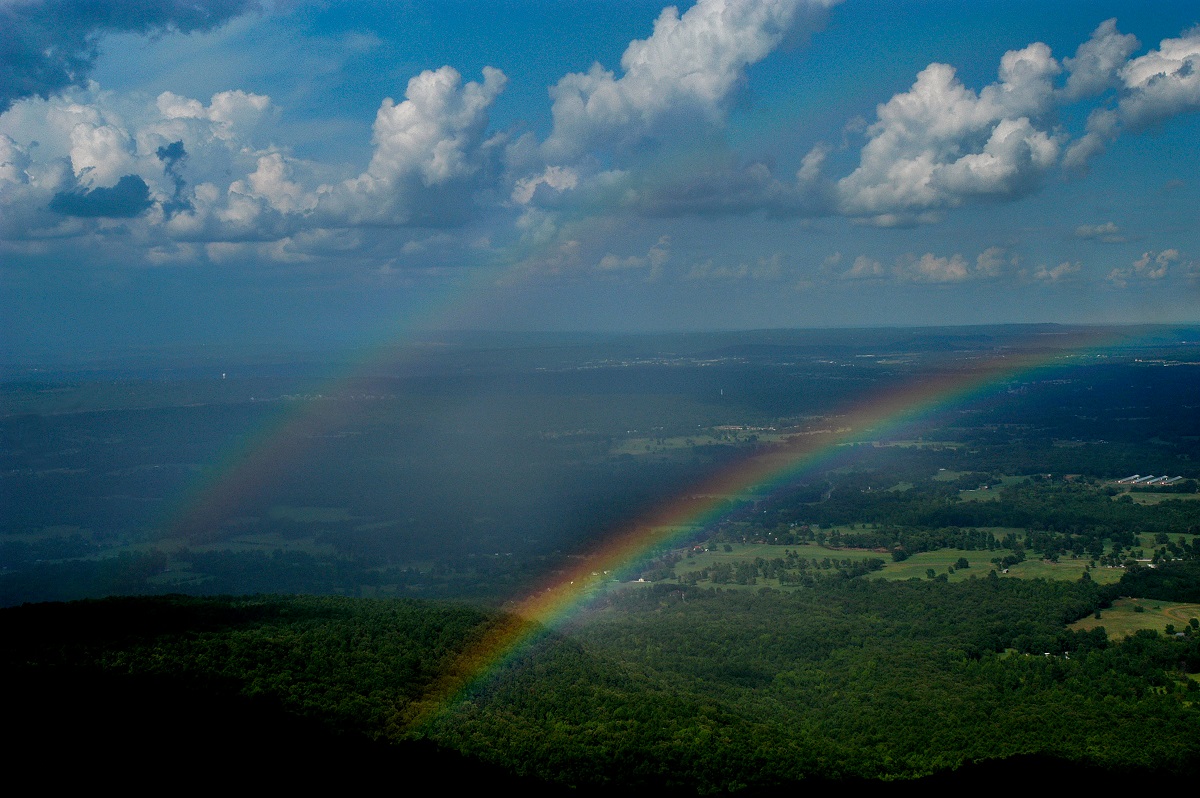 I spent my childhood camping in Arkansas State Parks. We roasted marshmallows, swam in lakes, and hiked trails. Even during my teen years, when all I wanted to do was stay at home and talk on the phone, I still remember one family hike in particular. I stood by an Ozark stream and felt overwhelmed by the beauty surrounding me. I also remember the first time we visited Petit Jean. I remember standing next to the gravesite on top of the mountain and hearing the legend of a little French girl who pretended to be a boy in order to follow her fiancé over the ocean and into the “new world.” I remember thinking to myself, “Wow! What else has happened in Arkansas?”

After that, I started paying more attention. I wondered how state parks got their names. I researched how old they were and how they were founded. I noticed historical markers and took the time to read them. These things led to my lifelong infatuation with our state’s past, and today we’ll explore a few of our fascinating state parks.

This park was established is a time capsule of not only historic buildings but also early ways of life in the Delta region. Arkansas historical structures were moved and reassembled on the grounds. A summer kitchen and the Refeld-Hinman Log House (a dog trot cabin from the 1930’s) are just a few of the historical structures capturing the history of the Delta region and the Arkansas Post. Native plant species landscaping, a historical dollhouse, and military relics are all on display for history-loving visitors. For more information visit their site https://www.arkansasstateparks.com/arkansaspostmuseum/

Another Arkansas history gem, this original frontier town is the site of major archeological excavations that revealed streets and home foundations. These are the kinds of exciting findings that help us understand life on the Arkansas frontier. Davidsonville, near Pocahontas, held claim to the first Arkansas territorial post office and courthouse. When the town was bypassed by a road project, the trade and traffic diminished, and Davidsonville faded into ghost town obscurity. Saved through state conservation efforts, the park now has a walking trail to the old village, pioneer cemeteries, picnic areas, trails, fishing and more. Embracing its ghost town past, the park celebrates in October with the “Ghosts of Davidsonville” event, with live music, bonfires, hayrides and reenactments. The biannual celebration “Black River Rendezvous” features Native American camps, mountain-man presentations and reenactments. To discover more visit their website https://www.arkansasstateparks.com/davidsonville/

Small in acreage but large in history, the Herman Davis State Park encompasses exactly one acre in Manila, Arkansas. It is dedicated to the grave and memorial of Herman Davis, Manila native, and nationally recognized war hero. Hailed as fourth in the top 100 WWI heroes list put together by General Pershing, Davis was a sniper that utilized his Arkansas hunting and shooting skills to save his platoon during the Meuse-Argonne Offensive. He was awarded numerous times for his sharpshooting, including the Distinguished Service Medal and two Croix De Guerre Medals. He tragically died just four years after returning home, possibly due to his exposure to poison gas during the war. To learn more about this Arkansas hero, visit the state park website at https://www.arkansasstateparks.com/hermandavis/.

This beautiful state park was originally hailed as a “Castle in the Sky” with its beautiful Victorian lodge and scenic views near Mena. The lodge was constructed by the Kansas City, Pittsburg and Gulf Railroad, and was named for Queen Wilhelmina of the Netherlands because many of the railroad’s investors were Dutch. Queen Wilhelmina was crowned in 1898, the same year the lodge was constructed, and was a colorful historical figure in her own right. She was an outspoken Nazi opponent, and while exiled in England, Churchill referred to her as “the only real man” among the governments-in-exile in London. Since the lodge was built by Dutch investors, a suite was reserved for the queen in the hope that she would one day visit (she did not). The Queen Wilhelmina State Park was formed in 1957, and while the original building was lost over the years, visitors can stay at the new and refurbished lodge. Check out their scenic accommodations at http://www.queenwilhelmina.com/

Named for the biblical mountain where Moses saw the Promised Land, Mount Nebo was a popular resort and thriving community in the late 1800s. Two hotels and beautiful views attracted thousands of summer patrons. The community was particularly progressive. In the early 1920s, it was the first town in Arkansas to have an all-female government, and it was rumored that some of the women ran against husbands and brothers in the election. After the Great Depression, large amounts of land were acquired due to delinquent taxes, and a portion of the mountain became a state park in 1933. Many private residences remain on the mountain, the property of descendants of original townspeople. Today, visitors can find cabin rentals, campsites, hiking, a swimming pool and some old home structures left over from the original town.  For more information visit their website https://www.arkansasstateparks.com/mountnebo/.

Parkin is located on the site of a Native American village that existed from A.D. 1000 to 1600. Scholars surmise that this site was the location of Casqui, a village visited by Hernando de Soto. In addition to being a state park, this site is also a research station for archeologists to conduct further excavations.  This state park is unique in so many ways, especially given that these sites are rare and usually didn’t survive the western migration of white settlers. In addition to Native American history, the park also allows visitors the opportunity to tour the Northern Ohio School, a historic 1910 schoolhouse. The park includes an exhibit area, auditorium and gift shop. Nature lovers will find a picnic area, playground and boat ramp with access to the St. Francis River. To discover more about our state’s ancient Native American history, visit their website https://www.arkansasstateparks.com/parkinarcheological/.