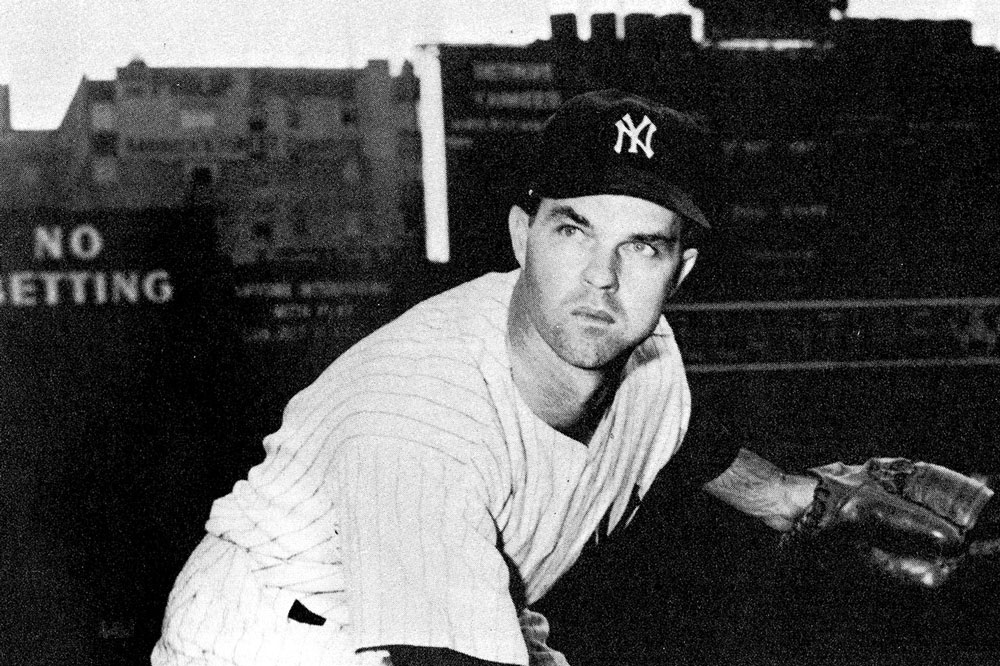 The third of four stories about rural Arkansans who became major league pitching stars in the late 1940s.

Much attention has been given to the classic confrontation of pitcher and hitter in baseball.  An individual contest within a team sport, pitcher versus hitter is a subplot essential to all other actions in baseball.  The pitcher/hitter matchup embodies all things baseball fans love about the game. It is physical, intellectual, and psychological. In a sport that loves statistics, the pitcher versus hitter matchup is a statistician’s dream.

Many of these individual pitcher/hitter duels are classic and create the impetus for some of baseball’s greatest moments. A very small number of these one-on-one confrontations go beyond the relative importance of a sport and rise to the level of an event of historic proportions. Such was the case on opening day 1947 when Johnny Sain from Havana, Arkansas, pitched to Jackie Robinson, the first African-American major leaguer in modern history.

“Jackie Robinson in his Brooklyn Dodgers uniform”Beyond race, John Franklin Sain and Jack Roosevelt Robinson could hardly have been more different. Robinson, a compact, muscular young man was a natural athlete. He was a product of the West Coast and a multi-sport star at UCLA. He was specifically chosen from what was then called the “Negro Leagues” by Brooklyn Dodger owner Branch Rickey. College-educated, thoughtful, but passionately competitive, Rickey was convinced Robinson could win the support of his teammates and handle the pressures of blatant discrimination.

Johnny Sain’s father taught him how to throw a wicked curveball and was convinced young Johnny had the talent to be a big-league pitcher. Others were much less certain. Sain was 6’2’ and weighed about 200 lbs. He looked like he could throw hard, but his fastball was average at best. Sain was laughed at, discouraged, and told to go into the necktie business, but father and son would not give up.

After high school, Sain spent four years in the Class D Northeast Arkansas League and two years with Class “A” Nashville. In 1942, Boston Braves’ manager Casey Stengel signed him to replace regulars lost to the military due to World War II. Sain won four and lost seven with the Braves, before getting his draft notice later in the year.

Remarkably, Johnny Sain improved as a pitcher more in the military than at any time in his professional career. Sain returned to the Boston Braves in 1946 as one of the league’s best pitchers. Later, Sain would credit the confidence and maturity he gained in military service as the major reason for his amazing improvement. After winning only four games previously in the majors, Sain won 20 in 1946.

Despite vastly dissimilar backgrounds and different paths to the major leagues, Johnny Sain and Jackie Robinson would share the stage on Opening Day, 1947. In retrospect, it may have been the most seminal pitcher/hitter confrontation in baseball history.

April 15, 1947, arrived chilly and gray in Brooklyn, and the unspoken questions surrounding the first African-American major leaguer were about to be answered. Secret petitions had been squelched, boycotts avoided, and players had been warned. Now it was simply time to play the game. What kind of reception would Robinson receive from the fans and more importantly from opposing players? How would southerner Johnny Sain handle his crucial role in American history that was about to unfold?

Looking back, Sain recalled he had little interest in anything except pitching. “It wasn’t that big of a deal at the time,” Sain said. “People ask me if I was worried about letting a pitch get away and hitting him, and I say no. I wasn’t even thinking about that kind of stuff.”

Johnny Sain threw the rookie a steady diet of his signature curveballs. Sain’s sweeping, knee-buckling, breaking ball was vastly different from anything Robinson had seen in the minors. Although the Dodgers prevailed 5 – 3, Robinson failed to get a hit. When asked after the game if nervousness had contributed to his lack of hitting, Robinson replied, “The reason I didn’t hit well was Johnny Sain’s curveball.”

The first baseball game with an African-American player had occurred without incident. Jackie Robinson was treated with respect by the Braves and cheered by fans on his first big league day. Unfortunately, this would not always be the case. Robinson faced unspeakable torment and racial taunting by opponents and fans throughout his rookie season. As Branch Rickey had requested before the season began, Robinson ignored the insults and focused only on baseball.

While Babe Ruth and the home run he popularized changed baseball, Robinson’s grace and courage contributed to a more universal cause, a crusade for equality that continues to this day. Johnny Sain’s part of the Jackie Robinson story is a positive episode in his legacy. Unlike many players of his day, he did not provide quotes laced with racially motivated resentment, which he would someday regret. Unfortunately, great players who played on opposing teams and a handful of his teammates would have the story of their baseball careers tainted by their intolerance of Jackie Robinson. Arkansas’ Johnny Sain’s part in the Jackie Robinson story is limited to curveballs, double plays, and an opening day loss for his Braves.

Baseball would be forever changed in the decade to come. The days of career minor leaguers became a thing of the past, as minor league clubs became more focused on their role in developing future major leaguers. Mickey Mantle became the last superstar from the back roads of America and players from rural backgrounds became the minority. Great African-American ballplayers like Hank Aaron, Ernie Banks, and Willie Mays soon followed Jackie Robinson into the major leagues. The best African-American players would now become major leaguers, and consequently, the Negro Leagues folded.

Both Sain and Robinson went on to outstanding careers. Robinson played ten remarkable years in the majors and is recognized today as a genuine American Hero. His number, 42, is not worn by any individual major league player, but worn on Jackie Robinson Day by every player in the major leagues. In 1962, he was inducted into the Baseball Hall of Fame.

In 1948, Sain was recognized by The Sporting News as the National League Pitcher of the year, when he won 24 games for the league champion Braves. He and left-hander Warren Spahn combined to win 11 games in September as the Braves moved from tied for first to pennant winners by 6 games. Sain or Spahn seemed to pitch every day and inspired Boston sportswriter Gerald Hern to create the unsophisticated rhyme that is still part of Johnny Sain’s legacy:

First, we’ll use Spahn,
Then we’ll use Sain,
Then an off day,
Followed by rain.

Back will come Spahn
Followed by Sain
And followed,
We Hope,
By two days of rain.

Sain enjoyed three World Series Championships in the early 50s, with the Yankees. He was chosen for the Arkansas Sports Hall of Fame in 1966 and the Braves Hall of Fame in 2002. Johnny Sain died in 2006. He is buried in Havana Cemetery in Yell County, Arkansas.