Could Isaiah Joe’s Injury Be a Blessing In Disguise? 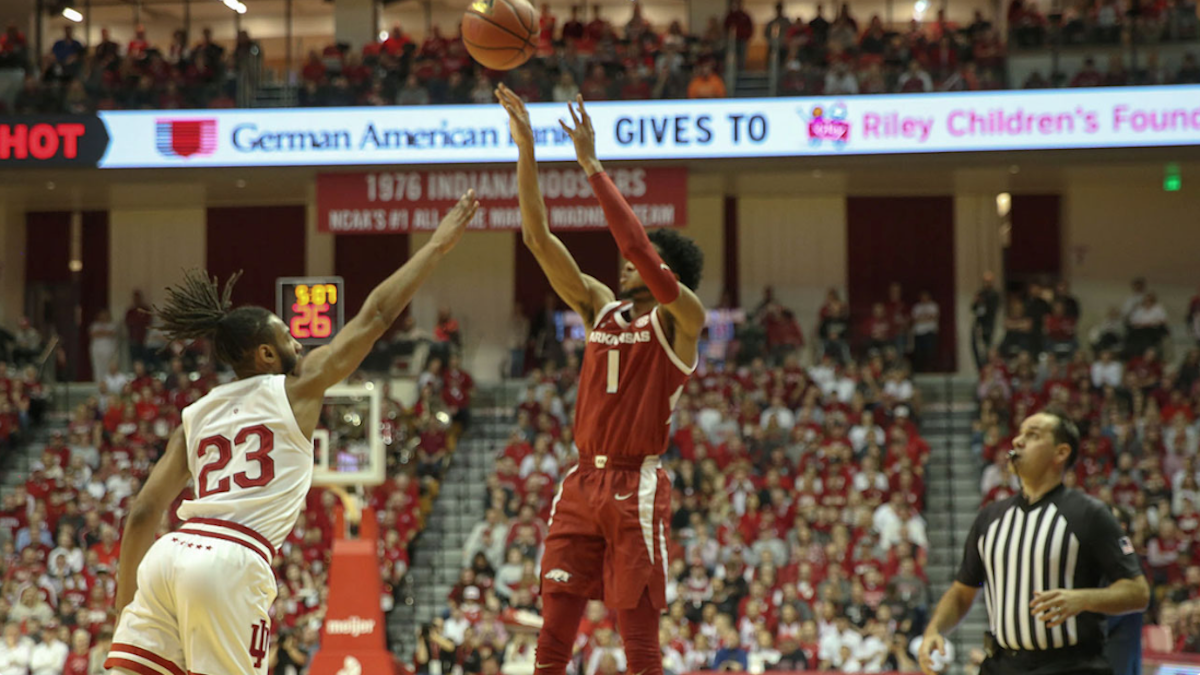 So far, the Razorbacks’ 2019-2020 basketball season can be divided into two eras: Before Injury and After Injury.

Before Isaiah Joe was hobbled by a right knee injury originally suffered in early January, the Hogs looked like world-beaters in Year 1 of the Eric Musselman Era. Led by Joe and Mason Jones, two All-SEC caliber guards, they’d lost only one game in non-conference and seemed like a near-lock to make the NCAA Tournament.

With the exception of a masterpiece effort at Ole Miss, Joe wasn’t putting up all-world numbers but he was still giving opponents a headache by shooting 34% from deep while averaging 16 points a game along with 4.3 rebounds, nearly two assists, 1.6 steals and numerous charges taken.

The sophomore even appeared as a potential late first-round pick in a few 2020 NBA mock drafts.

But a re-aggravation to Joe’s injury in early February, and a resulting arthroscopic debridement surgery, seemed to have sunk the Hogs’ March Madness hopes.

After Joe was sidelined, Arkansas lost five SEC games in a row to drop to 4-9 in conference. A major reason: Pivoting from the “small ball” strategy that had fueled its early success.

“When Isaiah got hurt, we really didn’t have any options so we started playing two bigs,” coach Eric Musselman said after a 73-59 loss at Florida. “And the two bigs [strategy] has not worked at all. We haven’t rebounded any better and our defense is not nearly what it was because of the lack of lateral foot speed.”

While Arkansas junior Mason Jones put in yeoman’s work in trying to pick up the scoring slack, often going for more than 30 points, it wasn’t enough. “We’ve lost all of our creativity at the offensive end where we created mismatches playing four guards and even five guards,” Musselman added.

Going into this season, Arkansas fans knew how small the margin for error was given the Hogs’ lack of size and depth. Most fans realized a serious injury to Joe or Jones would be catastrophic to postseason hopes. So they aren’t too upset this slide is happening. While they wish Arkansas would have shocked the world this year, they realize that the Hogs’ best shot at making the program’s first Sweet 16 since 1996 arrives next season.

That’s when a top 5 recruiting class hits the court, along with transfer 7’3” Connor Vanover, a likely starter in 2020-2021. For the program to produce its best team since the 1990s in terms of talent, size and bench depth, however, Jones and Joe must return.

If Joe had been totally healthy and playing well, he would be more likely to seriously consider entering the NBA Draft. Granted, he will still produce some highlights after his projected late February return to action, and likely will still get NBA-related feedback after this season — but his stock won’t be as high coming off this injury.

Isaiah Joe’s premier shooting ability, along with his length and smarts, makes him a possible first-round pick. Because outside shooting is so prized in the modern NBA, he has a great chance to capitalize on that potential. But first Joe will need to show scouts he has the strength and lateral quickness to defend and drive against the grown men at that level.

The 6’5” Joe is only 180 pounds. While that’s 10-15 more pounds than last year, he occasionally still gets roughed up against stronger, older college guards. A full season of durability, along with an extra 10 pounds of muscle and a bit more lateral quickness, should do wonders for his stock.

Joe’s shooting percentage, too, will benefit from playing off more talented offensive players who also command plenty of attention. Last year, he benefited from Jones and Daniel Gafford in those roles. Next year, he would have Vanover, incoming star freshmen like Moses Moody, and hopefully Jones again.

Mason Jones, too, will likely get feedback about his NBA prospects this offseason. Although his highly skilled, crafty game translates well to overseas basketball, Jones’ lack of explosiveness, speed and quickness hurt his NBA potential.

Imagine if Jones and Joe had both remained healthy and kept playing lights out this season. They were on track to lead Arkansas to a No. 5, 6 or 7 seed in March Madness and a deep tourney run if the team got hot. Afterward, with their NBA stock so hot, it’s not inconceivable one or both of them would have decided to turn pro.

Sure, Joe will still come back from injury and probably help the Hogs win a few more games this season, but many fans have already shifted their focus to 2020-2021. Jones and Joe stand to gain so much more, individually and collectively, by returning to complete major unfinished business.