The Fold is the Place to Be 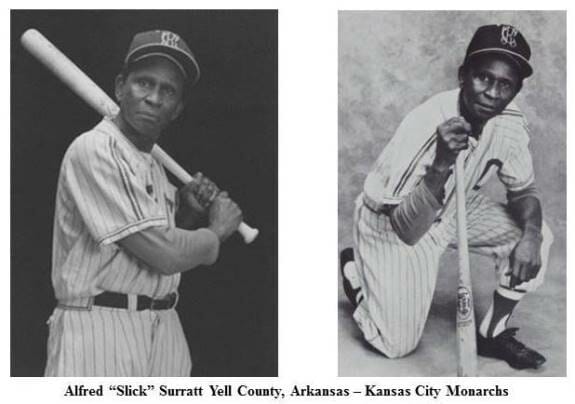 Slick Surratt claimed that he was so fast that if he hit a ground ball that bounced more than once the fielder might as well just pick it up because he was already on first base. A good ballplayer, but a better storyteller, Surratt became an energetic leader in the movement to recognize the great African-American baseball players of the 20th century.

Alfred “Slick” Surratt was born November 9, 1922, near Danville, Arkansas. He spent his youth in both Arkansas and in Kansas City, where his father lived, but the 1940 census shows him living in Yell County, Arkansas. After serving in World War II, he returned to Kansas City and began his baseball career. That career would be spent in the only advanced opportunity to play baseball professionally available to African Americans in the 1940s. A segregated major league called the Negro League.

In the late 1800s as baseball became “America’s pastime,” young Black men found a place on military teams, college teams, and company teams. The most talented of these pioneers like Moses Fleetwood Walker and Bud Fowler even played beside white players on early professional teams, but by 1900 racism and “Jim Crow” laws would relegate African Americans to exhibition games and on barnstorming teams.

The haphazard and informal structure of minority baseball changed significantly in 1920 when an organized league structure for players of color was formed under the guidance of Andrew “Rube” Foster, owner of the Chicago American Giants. In a meeting held in Kansas City, Missouri, Foster and a few other Midwestern team owners joined to form the Negro National League. The league would produce some of the most talented men to ever play the game. Unfortunately, those legendary baseball stars never had the opportunity to test their talent in the major leagues. Slick Surratt was among the last stars of that “other major league” known today as the Negro Leagues.

Most accounts of Surratt as a player indicate he was a “good” outfielder with exceptional speed. His hitting style was predicated on bunts, ground balls, and fast legs. Surratt played for the Kansas City Monarchs and Detroit Stars from 1947 – 1952. He also did some barnstorming on some of Satchel Page’s traveling team, which featured stops in several big-league parks, including Yankee Stadium.

While never listed as one of the great players of the Negro League era, Alfred “Slick” Surratt became an important figure in the preservation of the history of those great performers. After his baseball years ended, he became a youth baseball coach in the Kansas City area, where he worked more than 50 years for Ford Motor Company. He also became one of the most visible faces of Negro League baseball and worked tirelessly to ensure the great players of color would get their deserved recognition.

In the early 1990s, Horace Peterson, a leader in the preservation of African-American history, was joined by former players that included the well-known Buck O’Neil and a lesser-known local Negro League alum named Slick Surratt, to found the Negro League Baseball Museum in Kansas City, Missouri. From humble beginnings, the museum now resides in a 10,000 square foot facility shared with the American Jazz Museum. Surratt served on the board of the Negro League Museum until his death.

Perhaps the best descriptions of Slick Surratt were shared at his passing by his good friend, former baseball commissioner Fay Vincent.

“Slick passed away earlier this week, and his death left me saddened to the core. He was more than a friend. I truly loved him.”… “He was as slim as a pencil with the build of a greyhound. But it was his smile you had to notice. He was always smiling, full of joy. He seemed to be having fun—and he was fun to be with.”

“I see no point in being bitter, Commissioner,” he told me. “It won’t do no good for no one.” I will not forget the lessons I learned from this good and noble man. I will miss him, but I will never forget the joy of being in his company. If there are reserved seats where he is, I hope he keeps me in mind.”
– Fay Vincent, Wall Street Journal, 2-19-2010

Alfred Surratt died February 15, 2010, but his legacy lives on at the Negro League Museum in Kansas City, Missouri. The museum features exhibits, collections of Negro League memorabilia, and multi-media presentations. The museum, in partnership with the Kansas State University Teacher Education faculty and local teachers, has also developed numerous educational programs to tell the Negro League story to a new generation of students.

On December 16, 2020, 100 years after their creation, Major League baseball officially recognized the Negro Leagues as major league teams. The seven leagues, which played from 1920 to 1948, will have their stats and records added to Major League history.

“All of us who love baseball have long known that the Negro Leagues produced many of our game’s best players, innovations and triumphs against a backdrop of injustice. We are now grateful to count the players of the Negro Leagues where they belong: as Major Leaguers within the official historical record.”
– Robert Manfred, Commissioner of Baseball