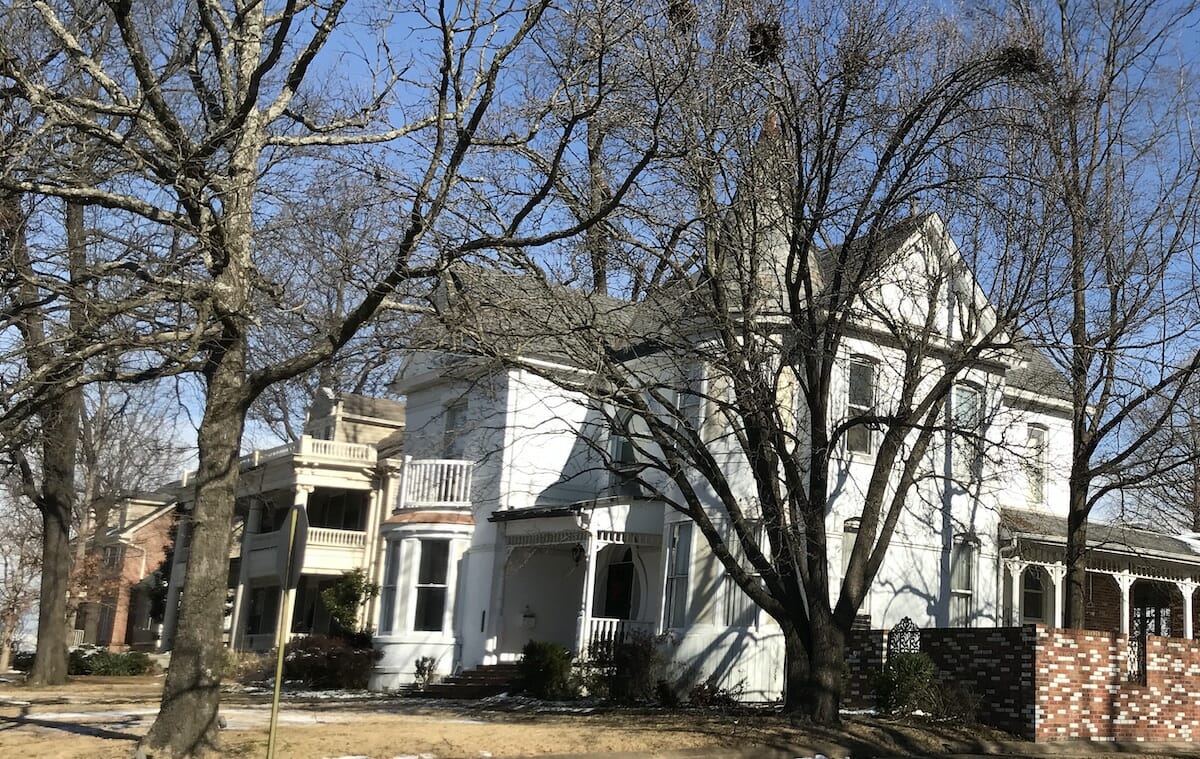 Situated on Crowley’s Ridge in the northeast corner of Arkansas, modern-day Jonesboro is a progressive and growing city filled with trendy shops, fine restaurants, museums and the highly-ranked Arkansas State University. The area that is now Jonesboro was once home to indigenous tribes like the Quapaw, Osage, and Caddo until English settlers acquired the territory as part of the Louisiana Purchase in 1803 and a permanent settlement, originally called Jonesborough and later shortened to Jonesboro, was established in 1815.

The town flourished and grew quickly. And as one of the oldest incorporated cities in the state, it has a rich history that is reflected in its homes and buildings. With 14 properties listed on the National Register of Historic Places, the city is an architectural record of the centuries-old town. The NRHP list includes the Craighead Country Courthouse, the gravesite of first woman Senator Hattie Caraway, and several buildings in the downtown area along with six historic homes in the West Washington Avenue Historic District.

Historic buildings reflect our history as well as the people who built them. Bank buildings and warehouses were often constructed to showcase the popular architectural stylings of the times in which they were built. But historic homes offer a personal look into the lives of the people who built and lived in them. Historic homes provide a window to our nation’s heritage and history. And the homes in Jonesboro offer an interesting look into our past.

Although much information about the Frierson House has been lost to time and a lack of documentation, it still stands as a symbol of the Jonesboro community. Built circa 1880, it is a perfect example of the post-Civil War “townhouse” style that was popular during the period. As the need for plantation-style living diminished following the Civil War, families abandoned their homes in the country to build quarters in town.

This two-story, wood frame house has a hipped roof with gabled dormers. The front of the house boasts a two-story porch with Iconic columns while the side porch has Doric columns. Much of the overall construction is typical of the post Civil War “town house” though some features added in later remodels make it difficult to accurately date the structure.

The Frierson name is well-known around Jonesboro, but the most famous resident of the home was likely Francis Cherry, the 35th Governor of Arkansas (1953-1955) who conducted his campaign for governor while living in this house.

Morris Berger, Jr. came to Jonesboro in 1869 from Austria and was one of the first prominent Jewish immigrants to the area. He helped establish Johnson, Berger and Company, a successful furniture business which was the largest and oldest furniture business in northeast Arkansas until Berger’s death in the 1930s. According to an early newspaper, the city of Jonesboro owed much of its progress to men such as Berger.

Built in 1869 after Berger purchased the property from the Frierson family, the house was constructed in the popular Queen Anne-style of architecture and featured a large turret on the front and elaborate chimney caps. A 1950s renovation removed some of the original Queen Anne-styling, but the home is still considered to be historically significant.

The home was sold following the death of Mrs. Berger in 1944, and a succession of owners ran businesses out of the house. Most notably, the Craighead County Library occupied the space from 1950 to 1964, and it was during that time that the original wraparound porch was removed.

Morris Berger Jr. and his family were active in the local Jewish community and were prosperous until the Depression. One evening in 1932, Berger swallowed bichloride of mercury in an attempt to end his life. When his wife found him, he was taken to a local hospital where he died the following morning.

The Berger Graham House was built in 1904 by Marcus Berger, a family member of Morris Berger, Jr. Marcus Berger moved to Jonesboro from St. Louis in 1883 where he opened a branch of his successful Marcus Berger and Company grocery and wholesale business, which became one of the largest and most successful mercantiles in northeast Arkansas.

Marcus Berger, like Morris Berger, was instrumental in bringing the Jewish faith to the community of Jonesboro. He constructed Temple Israel, the city’s first synagogue. And he is believed to have built over 70 structures throughout Jonesboro and Craighead County. He also established the American Trust Bank which was a significant stockholder in the Bank of Jonesboro.

Berger built the home at 1327 South Main as a wedding gift for his son Joseph and his wife Essie Blass whose father, Gus Blass, founded the Blass Department Store in Little Rock. The massive brick structure shows evidence of influence from both Richardsonian Romanesque and the Classical Revival styles of architecture, making it a distinctive structure in Jonesboro. When Joseph and Essie Berger moved to Little Rock in 1909, the home was sold to H.W. Graham, president of the Southern Mercantile Company in Jonesboro. When Graham fell on hard times, he was able to keep the house by turning it into a boardinghouse and tearoom known as the Homestead Inn.

William Travis Nash moved with his family to Jonesboro in 1871 to open a mercantile business. Having practiced pharmacy under the direction of his cousin, he started the Nash Drug Company on the Court Square in 1875. Nash was one of the first directors of the Bank of Jonesboro. And he owned a great deal of farmland as well as property in the Main Street area.

Nash began construction of the Queen Ann style residence in 1898 which he completed four years later in 1902. The home was designed by an unknown St. Louis architect who used plans that were modified from the Berger House, also located in Jonesboro.

A 1930s remodeling gave the home  a French-eclectic style with a chateau-esque appearance that was popular during the era. Additional modifications were made to the exterior of the home in the 1970s. But when the property was added to the National Register August 16, 1994, much of the interior had remained unchanged.

The property was later owned by Nash’s daughter, Flora Louisa Reid who married A.W. Reid, owner of Reid’s Pharmacy. Flora is believed to have been the first registered female pharmacist in Arkansas. Nash’s granddaughter, Ruth Nash Reid Hill, took ownership following the death of her mother in the 1940s. She was the first woman appointed to serve on the Jonesboro City Planning Commission in 1953. Today, decedents of Nash still own the property. William Nash’s son Gus Nash, Sr. established the Globe Pharmacy in 1907 which was a downtown staple until 2000.

John Vernon (J.V.) Bell came to Arkansas in the late 1800s by way of Tennessee. Bell owned and operated one of the first bookstores in Jonesboro and was appointed Secretary of Jonesboro Savings and Loan.

John Bell built his home in 1895 using plans designed by George Franklin Barber. Barber was known for Victorian-era home designs that he marketed worldwide through mail-order plan books. The Bell House is a markedly Queen Anne style structure with spindle work, bric-a-brac, and varied roof lines. The use of starbursts, stars, and moons also show some of the Oriental influence that was common in Victorian-era homes.

Bell sold the house in 1919, and the owner’s daughter converted it to a boardinghouse. The house also served as a fraternity house for a short time.

While at risk for demolition following the Great Depression and again in the 1960s, the house was restored to some of its former glory by subsequent owners. The home was painted white for many years. But at the time of its nomination to the NRHP, it had been painted colors more indicative of its construction period.

In April 1909, Governor George W. Donaghey signed Act 100 of the Acts of 1909 which called for a focus on agriculture, home economics, forestry, and other subjects in colleges to be located near the geographic centers of the four comers of the state. At the time, residents of Jonesboro pledged nearly $40,000 and 200 acres of land for the school to be built.

On July 5, 1910, Victor Cicero Kays, at age 28, was elected as the founding President of the First District State Agricultural School which is now Arkansas State University. He went on to serve the school as Chief Executive for 34 years. In 1936, Arkansas architect A. N. McAninch designed a home for Kays to be built in an area of the campus that contained faculty housing.

The house, a Tudor Revival style, features a brick facade on the first floor. The second floor is a combination of brick, wood and stucco. The roof is covered in flat green tiles that were made by the Ludowici-Celadon Company of Chicago, Illinois. The house still has its original doors, windows and tile roof.

Kays and his wife, Bertie Hale Kays, lived in the home for 30 years until his death in 1966. When Kays passed away, the house became part of the Arkansas State University campus. In 2012, the faculty housing that surrounded the home was demolished and Sorority housing was built in its place. But the Kays house remains as a reminder of the educator’s legacy to Arkansas State University.