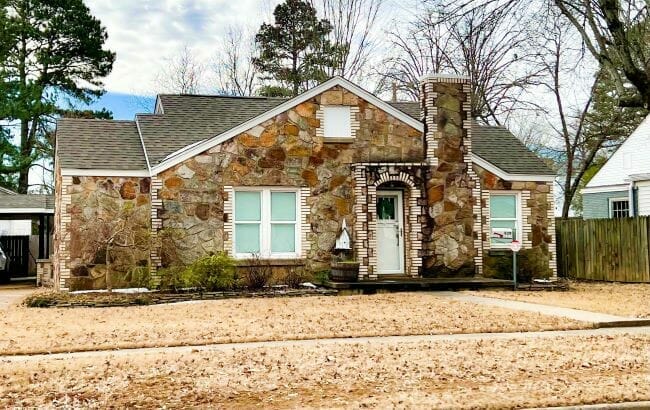 The Ozarks lack for nothing when it comes to being one of the unique, interesting and occasionally strange places to live in the United States. My family moved to Mountain View from Little Rock when I was a child. It was a bit of a culture shock. There were no red lights or movie theaters. There were, however, coyotes that howled at night and wild guinea chickens that clucked in the woods behind our house. We had an ancient falling-down outhouse in the backyard with flecks of original red paint. And occasionally a car would rumble by on the dirt road out front. Once I absorbed the fact that there would be no drive-thru McDonald’s meals (though it should be noted that in these modern times there is a McDonald’s in Mountain View), I was excited by our new home.

Among the many fascinating facets of the Ozarks, which range from historic steamboat town hotels to cities with underground streets, visitors will find an abundance of architectural styles. The farmhouse we lived in when we first moved to Mountain View didn’t look like a traditional farmhouse. It was a small stone house built in the 1920s. Cottages, bungalows, farmhouses and cabins dot the green hills in a hodgepodge based on eras and building styles. And among these styles are homes affectionately known as “Giraffe Houses.” This striking rock technique can be found in many rural areas, from Central Arkansas to Nebraska, but the Ozark region seems to be the epicenter for frequent sightings. And this style of building is rooted in the Cooperative Extension.

The U.S. farm market was at its peak during World War I. Farmers expanded, buying more land and livestock, in order to prevent food shortages. In 1914, Congress passed the Smith-Lever Act and established a national Cooperative Extension. The co-op would serve as an outreach program to educate rural Americans on new technology, agricultural opportunities, and homesteading tips.

But when the war ended, farmers were faced with less demand and often no way to pay back the money borrowed in their expansions. Banks began foreclosing on their mortgages. Land prices plummeted. The stock market crashed and life became harder. Farm prices hit rock bottom. The Cooperative Extension Service went into overdrive in an effort to help America’s farming community, and it is within the co-op community that we find the inspiration behind the idea for “Giraffe Houses.”

Rock houses were prevalent in the Ozarks long before the Great Depression. But according to architectural historian Debbie Sheals, the specifics of “Ozark giraffe” building styles were rooted in rock masonry techniques taught through Depression-era workshops from the University of Missouri Extension Service. Their instructional workshops and employee interviews were also featured in several publications, such as “Missouri Magazine.” The materials required for this type of architecture were cheap, and widely available all over the Ozark region.

Sandstone was split into slabs and then mortared together. These various shades and shapes of stones, along with trademark wide mortar strips, created the “giraffe” pattern of these exteriors. According to Sheals, the expertise and art of stone masonry slowed during the 1960s. Cheaper siding materials became available, and fewer stone houses were built. But, this bygone era of rock construction is still prevalent in the houses, churches, and downtown area in Mountain View. My mother took all of these photos while out on a drive. And it’s safe to say that the “Ozark Giraffe House” style is still alive and well in Stone County, Arkansas.

There are many aspects of Ozark living and culture that deserve admiration. The local skills in quilting, canning, farming, and music are unparalleled. Ozark residents can take the murkiest silver lining and turn it to gold, whether they’re claiming a symbol of backwoods living and turning it into a festival, or carving beautiful lives and industries out of the stone-covered mountains. And if anything is worthy of a comeback, these beautiful “Giraffe Houses” deserve a repeat performance.