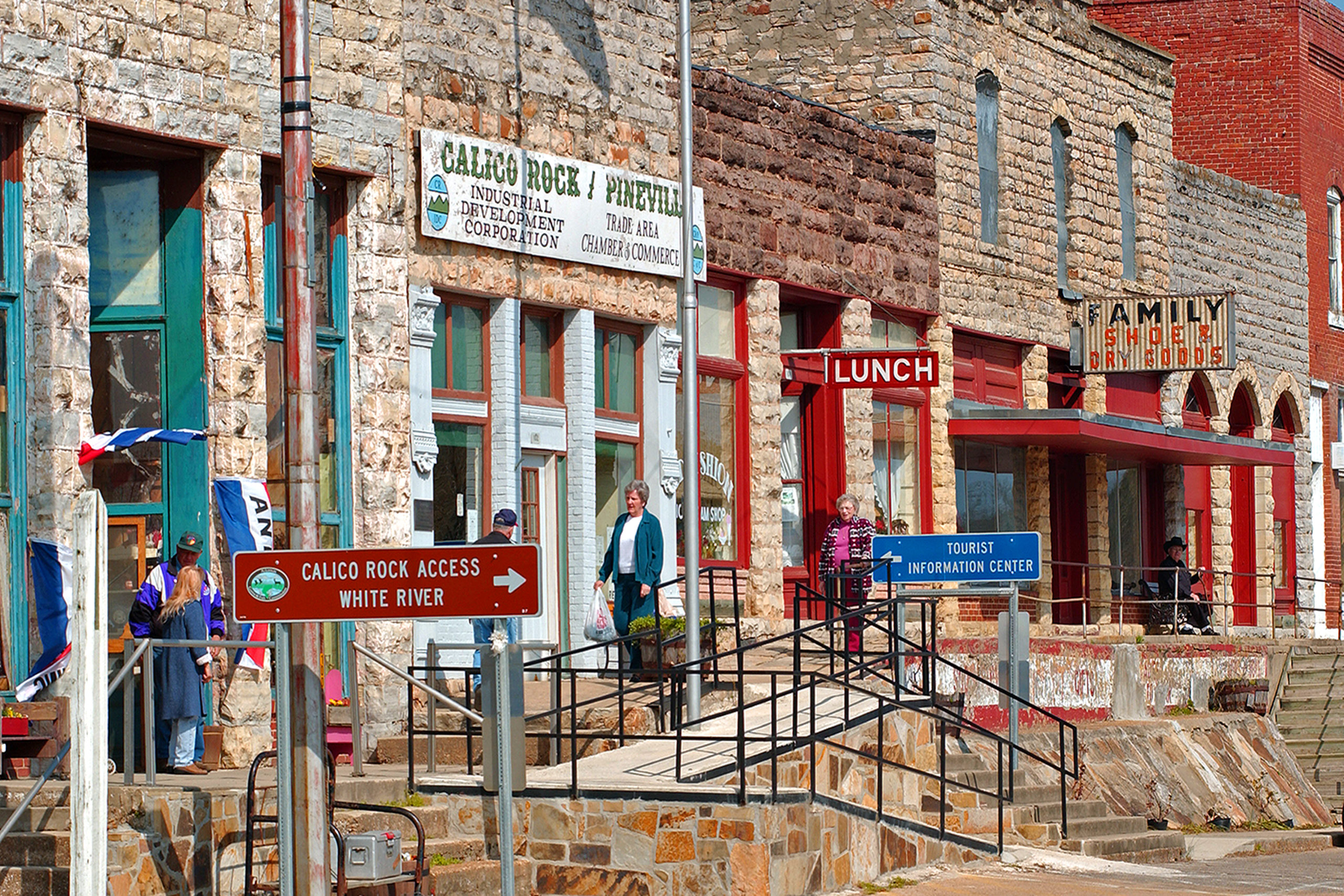 The wind blows, I pull on a knit cap, and a crow calls across the valley. I’m standing beside the old River View Hotel in Calico Rock. It’s an interesting building, one that I’ve probably seen a dozen times in my life but never took the time to examine. It’s long and white, with years of additions and renovations showing, almost like a quilt in building-form. It’s a quiet place, one block away from downtown Calico Rock, overlooking the Ozarks and the river below. It might not be regal like other older hotels, but one glance and you know the building holds good stories.

The trees above the hotel are bare, their branches creating dark designs on a winter’s sky. Stone retaining walls surround the property, winding back and forth. In my mind’s eye, I can see them dotted with daffodils in the spring. Calico Rock is quiet this time of year, a true small town. No stop lights. No fast food restaurants. Just peace, quiet, calling crows, a little mystery, and historic buildings.

Calico Rock got its unique name from the strips of color in the bluffs above the White River (no other city in the United States has the same name). Once a busy steamboat landing, it grew into a boomtown, and in the 1960s was the largest town in Izard County. Its current population hovers at around 1,700 people, but when you visit you can sense the history. It has the feeling of a place that used to vibrate with bustle and business. From old legends about Hernando DeSoto passing through the area in the 1500s, to buried Civil War gold, to Jesse James’ hideout, to Peppersauce Alley, this isn’t your average small town. And the River View Hotel has been a witness to long years of Calico Rock rises, falls and history.

Construction of River View began in 1923, during a busy and profitable period in Calico Rock’s history. Founded as a railroad hotel, workers used buckets of sand and gravel to mix the cement for the hotel’s walls. Thirty rooms were built, and nightly fees ranged from 25 cents upward. It wasn’t a luxury resort, but the rooms were clean and contained a metal bed and furniture (not to mention the all-important chamber pot). When it opened in 1924, railroad workers, engineers and conductors filled its rooms. They caught up on sleep between their busy shifts. In addition to providing night’s lodging, the hotel dining room was a busy place where guests and residents of Calico Rock gathered to eat and catch up on local business (and likely gossip). In 1938 the men and women’s outhouses were traded in for a “flush toilet” (the first in the county). It would prove to be such a novelty that it was visited not only by hotel guests, but also by locals who paid 5 cents per use.

The hotel changed hands in 1944, and by then it had become mostly residential with long-term boarders. Other rooms were rented as offices, most notably to Dr. Hildred Meade (hailing from the Western Dental College of Kansas City), one of Arkansas’s first female dentists. In the late 1980s, the hotel was once again remodeled to create the lobby, restore the dining room, and create suites for guests.

As time ticked on for the hotel, tales of ghostly appearances multiplied. There were rumors of voices in the halls, observations by a paranormal society, and even a room exorcism. Now listed on the National Register of Historic Places, the River View Hotel contains a lot of history within its 95-year-old walls.

The River View is still in operation, but according to their website is closed during the winter season (which explains the solitary feeling I got when perusing outside the property). The owners are proud of their “simple Ozark hotel” that hearkens back to a time of line-dried sheets and quilts on all the beds. With front porch swings and ceiling fans, views of the river, no phones in the guest rooms, and local hiking and canoeing, this is a hidden Arkansas gem where guests can connect with history and decompress. For more information or to plan your spring getaway, check out their website.