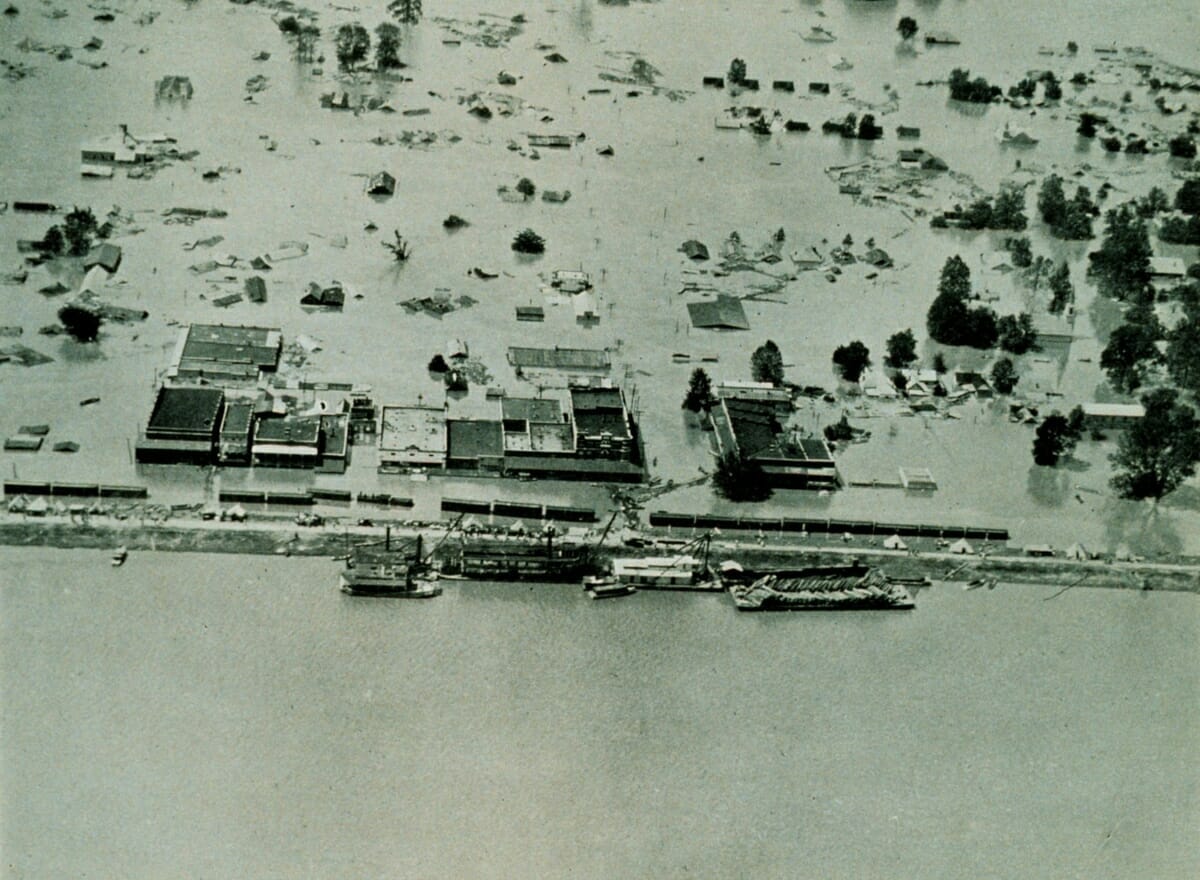 Arkansas sees its share of wild weather. But in the spring of 1927, so much rain fell that the levee systems holding back the Mississippi and Arkansas Rivers failed, resulting in the most destructive flood in state history. Also known as the Mississippi River Flood of 1927, the Great Flood impacted more than the land it inundated. Its effects altered the economics of the country, shifted the population and even changed the political landscape of the United States.

The stage was already set for a devastating flood. In 1926, heavy rains drenched the Midwest and filled the Mississippi River Basin as the water drained towards the Gulf of New Mexico. Flooding wasn’t unusual, and a series of levees had been constructed along the Mississippi River beginning in the 1880s. Once the levees were in place, farmers had access to previously-unusable land and began planting crops in the former flood plains, including the Arkansas Delta. Land that was formerly low-lying swamps was cleared for timber and then used for farming. The farmers, and their financial backers, trusted the levee system to work and keep the river from reclaiming their newfound farmland.

J.O. Davidson sketched these images of the Mississippi River levees in 1884. They were published in “Harper’s Weekly”.

In the spring of 1927, after a wet summer and fall, heavy, early snowmelt from Canada began filling the Mississippi River system early. On January 1, 1927, the Mississippi River was already at flood stage north of Arkansas in Cairo, Illinois. It continued to be a wet spring. The White and Little Red Rivers flooded, a precursor to the larger flood. In April, Arkansas received unusual amounts of rain. Little Rock had 7 inches of rain in a few hours. The Mississippi River wasn’t the only one at flood stage. The Arkansas, White and St. Francis Rivers were all overflowing.

The levees holding the water back from cities and fields were already saturated with water. Men patrolled the levees, searching for breaches and shoring them up with sandbags, but the water was too much. The levees began to collapse, including every levee between Fort Smith and Little Rock. Cities were inundated so fast people didn’t have time to escape. They climbed onto roofs and up trees as wagons, belongings, and livestock were washed away. At least 145 levees along the Mississippi River collapsed, flooding over 27,000 acres.

Governor John E. Martineau called up the 154th Observation Squadron of the Arkansas National Guard to assist in rescues. The 60-member unit flew aerial patrols along the Mississippi to search for breaches in levees and also located stranded people. They delivered food and supplies to relief efforts and also helped strengthen and rebuild levees.

Painting by Gil Cohen, courtesy of the National Guard.

A levee breach on the Mississippi River in 1927.

The devastation wasn’t short-lived. The water was slow to drain with so much of the river basin saturated. Some areas were submerged in up to 30 feet of water. The floodwaters affected 14% of Arkansas’s total land area and displaced 350,000 people in the state. Arkansas was the state most affected by flooding, with nearly 100 recorded deaths, and likely many more. With nowhere to go, the water remained for months.

The American Red Cross immediately set up refugee camps using Army tents. These tent cities were segregated. Many of those farming the land were poor Black sharecroppers. Those living in Black tent cities received fewer provisions and were forced to assist in clean-up efforts. Sharecroppers that worked for larger planters were strictly monitored, as planters feared the loss of their labor force. After the waters receded in August and September, thousands of laborers left the state, kicking off the Great Migration, where rural workers left the South for better economic prospects.

Though the Red Cross sheltered people through mid-September, the federal response to the worst flood in history was slim. No federal money was given in direct aid to those who lost their homes, livestock and farms. While President Calvin Coolidge did little to help relief efforts, his secretary of commerce, Herbert Hoover, directed flood relief operations, eventually putting the tent cities under government control. Hoover’s management of the flood gained him enough notoriety that he won the presidential election in 1928.

The flood didn’t just shift the results of one presidential election. The treatment of Black people throughout the catastrophe, and the migration of many to other states, caused many Black people to switch their political support from Republican to Democrat. The 1927 flood also affected the federal government’s response to natural disasters after Coolidge’s administration was criticized for doing so little to help the victims.

After the Great Flood, Congress enacted the 1928 Flood Control Act. This act put the U.S. Army Corps of Engineers in charge of rebuilding the levees along the Mississippi. In addition, they built a series of 29 locks and dams and hundreds of canal runoff channels to avoid such massive flooding. Another flood followed the Great Flood in 1937, but this time the levees held. After the Great Depression, an even greater push for flood control created many of the dams in Arkansas.