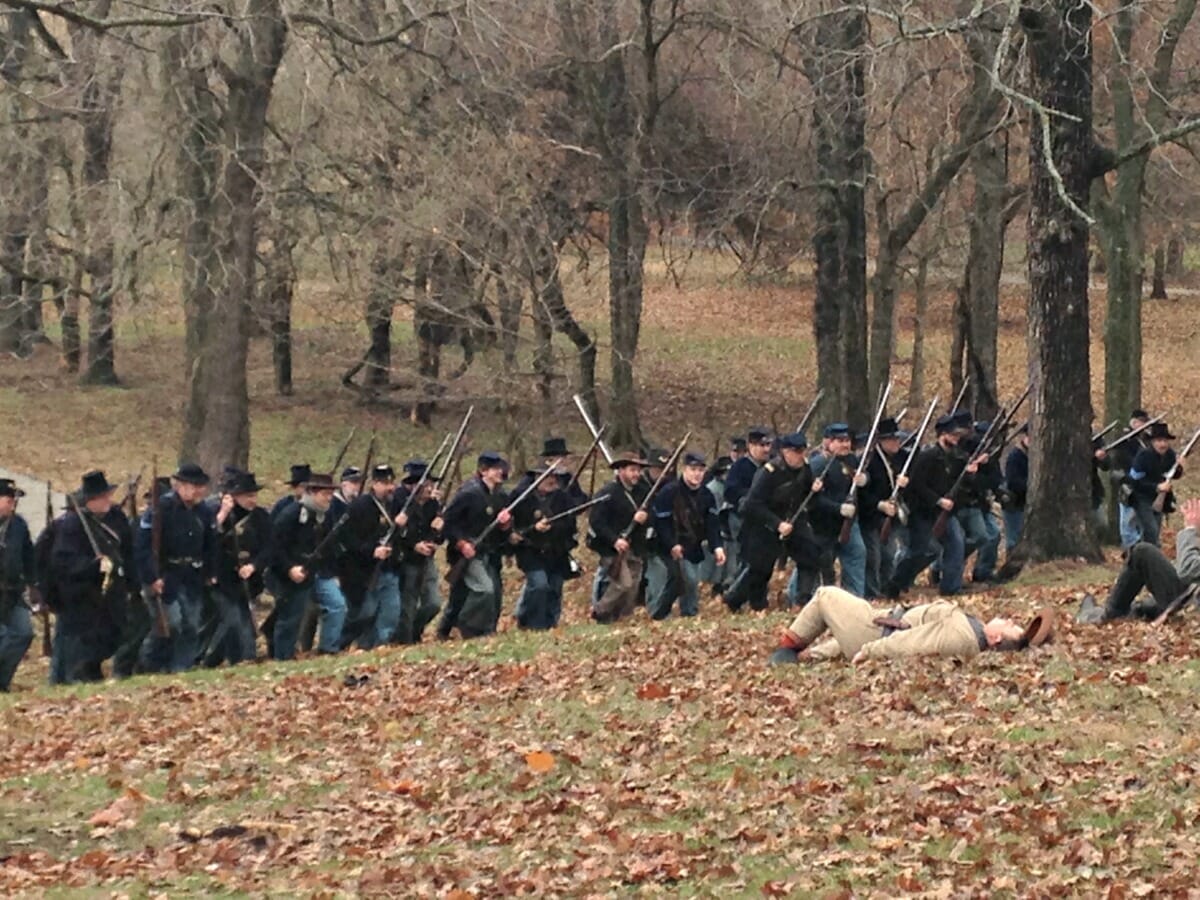 Among the rolling hills and green fields of the Ozark Mountains lies Prairie Grove Battlefield State Park. On the dawn of December 7th, 1862, this beautiful place turned into a bloody battle between the Union and Confederate armies as both sides fought to claim Northwest Arkansas for their side in the Civil War.

The Battle of Prairie Grove was the last significant battle in Northwest Arkansas and its result decided the fate of both Northwest Arkansas and Missouri for the remainder of the Civil War. The battle is reenacted every other year, on even numbered years, the first weekend in December at Prairie Grove Battlefield State Park. This year, the reenactment takes place December 3rd and 4th.

The battle began with Confederate mounted troops defeating the Union Cavalry. The cavalry began to retreat back to Fayetteville until Union Brigadier General Francis J. Herron stopped them. Herron’s nearly 10,000 Union troops had marched from Springfield to meet the Confederate forces at Prairie Grove after receiving a request for reinforcements from General James Blunt, the Union commander at the battle of Cane Hill, which occurred November 28th. Blunt’s troops marched from Cane Hill to Prairie Grove over rough terrain, arriving halfway through the battle to join forces with Herron’s soldiers.

After the shelling stopped, the Union infantry dashed across the field and engaged the Confederate troops in the woods on the hillside leading up to the main ridge where the Confederates had their artillery. They advanced as far as the Borden House, owned by Archibald Borden. The Bordens had abandoned their house in the face of the impending battle and were sheltering in the basement of a nearby home. The Confederate soldiers defended their position and sent the Union troops scurrying back across the field under the safety of Union artillery fire.

As darkness fell, both armies essentially held the same positions they’d begun the day with, but both sides had received numerous casualties. The Union troops were exhausted from the strenuous march to engage in battle. Unknown to the Union commanders, the Confederate soldiers were out of ammunition and food. Southern general Thomas Hindman ordered his troops to retreat to Van Buren under the cover of darkness. When the sun rose on December 8th, 1862, only the Union troops and the many dead and wounded on both sides were left on the battlefield.

The reenactment of the Battle of Prairie Grove follows the original battle as closely as possible. Visitors will see the Confederate soldiers holding the steep ridgeline near the Border house with their cannons aimed across the woods to Morton’s field. The Union army reenactors will fire their cannons from across the field. It will be loud! Southern riders will spar with Union cavalry before the cavalry retreats. Then the battle ensues with three waves of Union attacks and close fighting in the woods leading to the ridge and around the Borden house and apple orchard.

Many of the reenactors hail from Arkansas and Missouri. Participants are organized into companies that mirror some of the original companies of the Civil War era, like the 9th Company Arkansas A. The reenactors will set up Union and Confederate camps visitors can visit on the weekend of the battle. The state park will also have a number of other demonstrations associated with the battle and Civil War era, including a period dance at the Latta Barn Saturday night and a period church service Sunday morning at the log church.

The Union and Confederate camps open at 9 a.m. both Saturday and Sunday and remain open throughout the day. The reenactment will take place twice, beginning at 1 p.m. both days. For more information, visit the Prairie Grove Battlefield website. Be sure to dress warmly, be prepared to stand to watch the battle reenactment and consider taking ear protection for the kids as the cannons can be loud.

Enjoy a weekend considering the history and impact of one of the biggest battles in Arkansas history.

One response to “The Battle of Prairie Grove Reenactment Weekend”