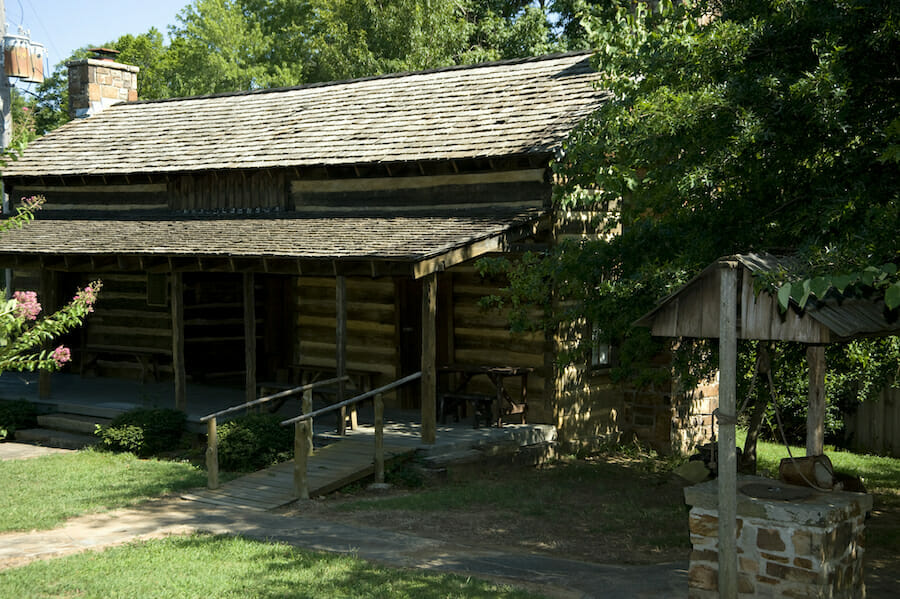 Beginning in the early 1800s, Arkansas’s population was exploding. Communities were popping up, and homesteads were being claimed as westward expansion was being encouraged. Time and technology have propelled the state into modern times, but tiny glimpses of the past exist all over Arkansas. There are historic cabins and homes sprinkled across the state. Some are preserved as museums; some are hidden along hiking trails, and some are privately owned. These cabins offer an important link to Arkansas’s past and are also fun to visit and photograph. This abbreviated list is just a sample of the historic cabins that remain throughout Arkansas.

The Potts Inn is considered to be the “Holiday Inn of its time.” Build by John Kirkbride Potts in the early 1800s, the inn is one of the best-preserved stagecoach stations on the Butterfield Overland mail route between Memphis and Fort Smith. The Inn, along with multiple outbuildings including several cabins, now operates as a museum and includes several interesting collections relating to the historical time period.

Recognized as the oldest public structure in Arkansas, this 1829 dog-trot log cabin was built by Jacon Wolf on a hill overlooking the White River. The house underwent a significant restoration in 2002, returning it to its original appearance. The house and several buildings are not open for tours, but visitors are welcome to roam the grounds surrounding the building.

The Prairie Grove Battlefield State Park is preserved as one of America’s most intact Civil War battlefields. The park commemorates the bloody battle while providing visitors a sense of what life would have been like during the Civil War. The grounds include several homes, a blacksmith shop, a dog-trot house, and various outbuildings.

Built in the 1830s, the Danial Greathouse cabin served as an inn along the Butterfield’s Overland Mail Company trail. The house was originally located about eight miles outside of Conway. It was moved and fully restored by the Faulkner County Historical Society in 1966.

The Vineyard Cabin was built as a one-room cabin in 1848 by a local schoolteacher William Blaylock. When Blaylock married two years later, he added a second room to the house. The cabin was originally located west of Greenwood but was moved to its location near the Old Jail Museum in 1994 and was restored in 1996.

When Hobart Hooten purchased around 50 acres of land in the 1950s, he acquired a cave and a cabin built in the 1850s. For many years the cabin served as an entry point for families to explore the Indian Rock Cave. The cabin is now part of the Log Cabin Museum located in Fairfield Bay.

This collection of historic buildings is the work of the White County Historical Society. Visitors can take self-guided tours of the grounds, including several log cabins, a schoolhouse, train station, blacksmith shop and jailhouse. The village hosts several events throughout the year with living history demonstrations, vendors, live music and more.

The Woolly Cabin was built by Martin Woolly, the park’s namesake, in 1882 in the “hollow” less than a mile southwest of Woolly Hollow State Park. The cabin was relocated in 1975 and was restored and included as a part of the state park.  Park interpreters provide historical background information and tours of the cabin daily.

Located high above the Buffalo National River, Collier Homestead is an example of a typical Ozark homestead in the early 1900s. The home was built by Solomon “Sod” Collier and his wife Ida Mae in 1932 under the rules of the Homestead Act of 1862. The Colliers fulfilled the requirements and received a patent on the home and 40-acre plot of land in 1937. The land and home are now part of the Buffalo National River near the Tyler Bend Visitor Center.

This log house was built by William Villines in 1850 and is viewable from a small parking area. In 1854, James Villines was born in the home to William and his wife, Rebecca. James, also known as “Beaver Jim,” became well known throughout the valley and across Arkansas for his animal trapping ability. James Villines moved to his homestead just across the river in the 1880s, which visitors can view following a short hike.

Parker Homestead is an incredible private collection of pioneer-era buildings and artifacts. The collection is maintained by Teressa Parker and her family and includes a church, school, barn, blacksmith shop, four houses, a grist mill, post office and thousands of artifacts. The extensive collection is open during several special event weekends each year or by appointment.

Once a booming zinc mining town, Rush is now a ghost of the past and the town which once was home to nearly 5000 people, sits quietly as time rushes by. The mining operation was at its peak in the late 1800s and through World War I, when the need for high-quality zinc was at an all-time high. The war’s end also marked the end of Rush when zinc was no longer needed, and it was difficult even to give it away.

Rush was officially considered a ghost town in 1972. Structures, including several houses, a barn, an old general store, mine entrances and others are now protected as a historic district and maintained by the Buffalo National River Park Service. 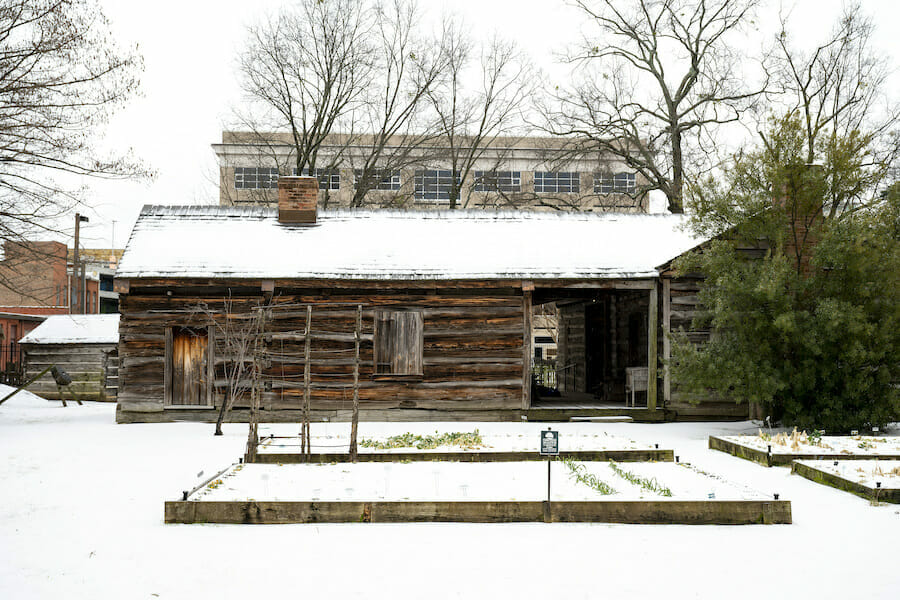 The Historic Arkansas Museum is home to several historic structures, including those representing an 1850 farmstead. Among the building is a dogtrot-style home which was relocated from Scott. Although much of the home’s history has been lost to time, records indicate that William Stith Pemberton from North Carolina lived in the house for at least a year in the 1850s. The family built a cotton plantation along with 26 enslaved men, women and children. The museum features the store of John Perry, who was seen as the leader of those enslaved.

Did we leave off your favorite historic cabin? Leave a comment so others can research and check it out.

3 responses to “13 Historic Cabins in Arkansas”