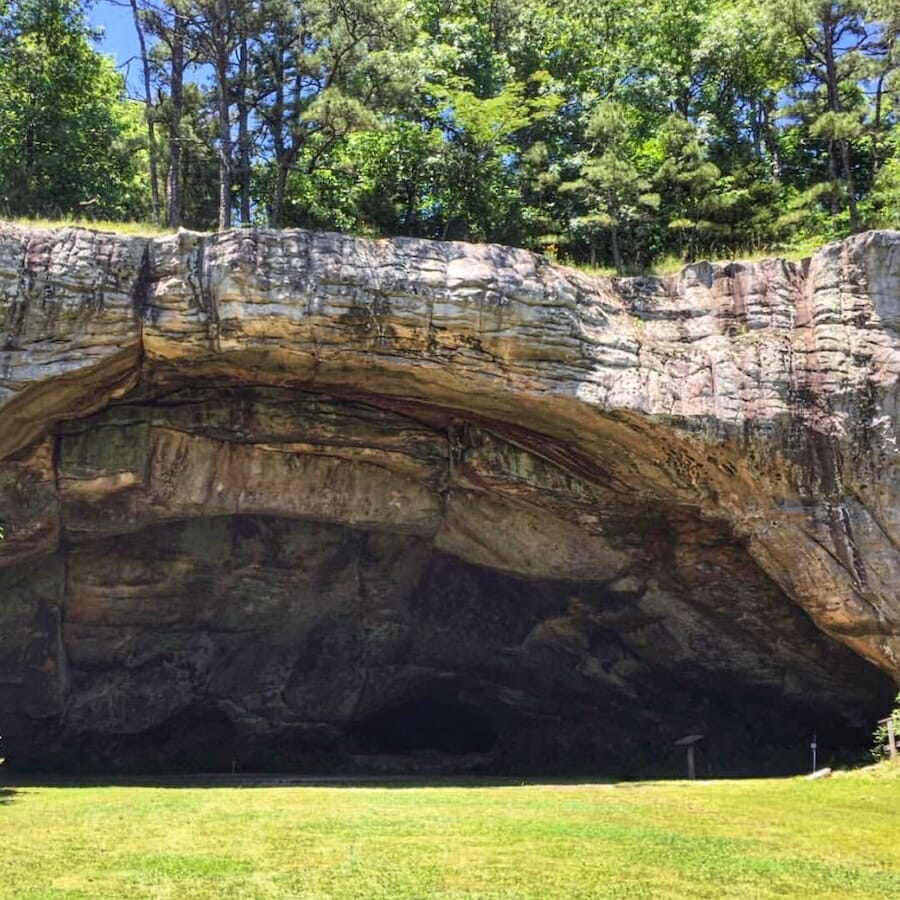 We’ve been taking day trips to Fairfield Bay for the last few years. Usually, we head to the Marina, where we have enjoyed some of the festivals and participated in the Standup Paddleboard division of the Paddle Battle races where I got second place one year and first place the next! We’ve paddled out to hike Sugar Loaf Island, rented a boat on a few occasions and camped in the campground. The trip almost always involves a stopover at Janssen’s in nearby Edgemont for a meal or, at the very least, a slice of their legendary chocolate cake. Recently, I learned about their historical Log Cabin Museum and the Indian Rock Cave, a National Historic Place, so we packed a picnic lunch and loaded up for a fun day of exploring.

Fairfield Bay was built as a recreational and retirement community in 1965 and you can read more about that here. The Indian Hills Golf course draws a lot of visitors, as does the Marina, which has become more welcoming to the community in recent years with a variety of events and festivals each year. In addition to the lake activities, Fairfield Bay boasts miles of ATV and hiking trails, including the short trail to Indian Rock Cave, which begins right outside the Fairfield Bay Log Cabin Museum.

The museum was built by members of the Fairfield Bay community in 1976 as a gift celebrating the county’s bicentennial. The museum was built from a kit and was designed to house a variety of exhibits about life in the Fairfield Bay area. Exhibits include Indian artifacts, clothing, jewelry and other treasures from early Arkansas settlers, a wild animal exhibit and books and books full of newspaper clippings, cemetery information and the history of Fairfield Bay’s residents.

One of the most interesting pieces in the museum is a Mano and Metate, a mortar and pestle type stone tool that was used to grind grain such as corn. The stones are believed to be around 4000 years old and were found in the area, which is now the Indian Hills Golf Course.

The totem pole located outside of the museum was built in 1991 and dedicated July 4, 1992. This American totem pole was carved and painted by the Woodcarvers Unlimited Club of Fairfield Bay. The pole is carved from an Arkansas red cedar log that was donated by a local logging company and depicts scenes of the signing of the Bill of Rights.

In the 1950s, a man named Hobart Hooten purchased around 50 acres of land, including the Indian Rock House Cave. Upon the property was a log cabin that is believed to be from about 1850. When Hooten sold a portion of his land near the river to the U.S. Government before the Greers Ferry Dam was built, Hooten disassembled the cabin and moved it to its current location atop the Indian Rock House Cave.

For many years, Hooten sold tickets to the cave for 10 cents and his wife ran a craft business out of the cabin. Hooten later sold the cabin to Fairfield Bay, Inc. in 1969 for $1.00, so the community would protect it.

When the cabin was rebuilt, it was chinked with cement instead of mud and straw. However, it still serves as a window to home life in the mid-1800s. At the date of this publication, the log cabin which is furnished to the time-period was closed for fumigation to battle a carpenter ant problem.

The hidden gem of the museum located a short hike or golf cart ride away is the Indian Rock  Cave. This bluff shelter cave is the largest cave in Arkansas to contain documented petroglyphs. The bluff cave is nearly 100 feet wide, 100 feet deep and 50 feet tall.

Artifacts and evidence found in the cave indicate that it has served as a shelter to primitive people as far back as 1000 B.C. and was a tribal meeting place for Quapaw, Osage, Cherokee, Shawnee and Delaware nations.

Several petroglyphs have been documented inside of the shelter. It is believed that many were added during the severe winter in 1776 and some date as recent as 1828. The shelter was added to the National Historic Register in 1982 because of the significant markings.

A plaque located outside the cave indicates that Hernando DeSoto visited the spot in 1542 while he was on his quest for the Fountain of Youth.

The Fairfield Bay Log Cabin Museum is open daily from 10 a.m. to 2 p.m. or by appointment. The cave trail is accessible during daylight hours. Contact the museum by calling (501) 581-1638.