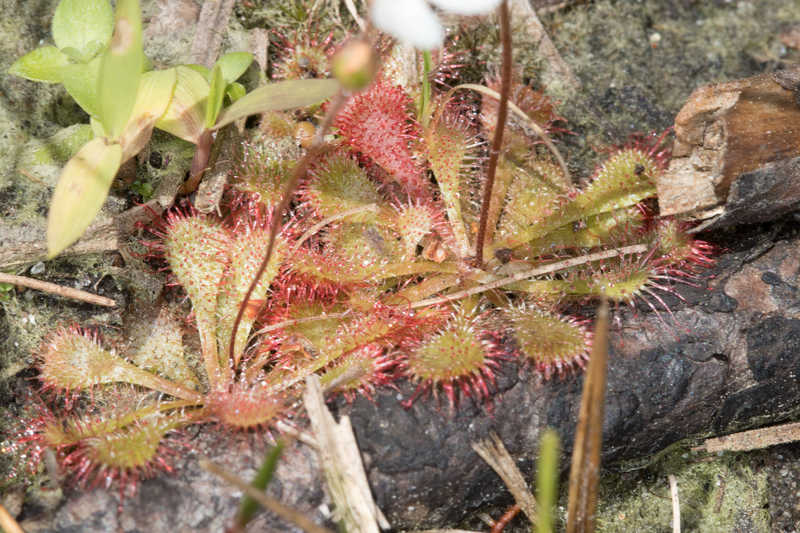 The greenhouse connected to my high school biology classroom was a magical place: warm, sunny and green, even in the dead of winter. Tables and rows were often packed with petunias, geraniums, verbena, and impatiens for school plant sales and vegetable seedlings that would eventually be added to the school garden. But the best part of the greenhouse was the corner that contained my teacher’s personal collection. Over her years of tenure, the area had become a jungle reaching to far corners and grabbing for just a little more sunlight: big, beautiful succulents, colorful orchids and ferns with fronds for days. The space also contained a mysterious collection of carnivorous plants.

Arkansas is home to nine confirmed species of these curious plants.

Unlike other types that get their nutrients only from the soil, carnivorous plants like the Venus’ flytrap consume small (sometimes microscopic) animals and insects to get some of their nutrients. I recently spoke to Theo Witsell, ecologist and chief of research with the Arkansas Natural Heritage Commission about these unusual “meat”-eating plants.

Carnivorous plants are both terrestrial (live on land) and aquatic (live on water). They often exist in areas that have low nutrient availability such as clay and sandy soil or in ponds and marshes. They can thrive by eating insects. Arkansas has two terrestrial species, five aquatic species and two that can occur on water or land.

The terrestrial species don’t play well with others and prefer areas where the soil is bare and they are not in competition with or shaded by other plants. They are typically found in native grassland areas across Arkansas and often thrive in years following a prescribed burn or other fire.

Sundews, one example of this species, trap insects with the sticky, red, glandular hairs that grow on their leaves. The process works similarly to a glue trap and when the insect becomes stuck, the plant secretes an enzyme to digest the insect. Another gland found on the leaves then absorbs the nutrients.

The five aquatic species (along with the two terrestrial/aquatic Utricularia species) found in Arkansas are commonly referred to as Bladderworts. Five of them have both floating and submerged portions of the plant and flowers that emerge above the surface of the water. The other two species have air-filled structures that act as a flotation device.

Bladderworts use sugars to attract insects to specialized bladder traps. The plant pushes water out of the trap and closes the door. When an insect triggers it, the trap quickly opens, allowing water and the insect to rush in and the trap is closed again. The plant is then able to digest the insect. Here is a cool video of the process.

Have You Seen These Carnivorous Plants?

An additional bladderwort and a pitcher plant have been rumored to exist in Arkansas. To date, no solid specimen or photographic evidence has been collected to confirm their presence in the state. Since researchers can’t be everywhere, you could possibly have this plant located on your property, so keep an eye out. Both are most likely to occur in southern Arkansas.

If you find samples of carnivorous plants, contact Theo Witsell with the Arkansas Natural Heritage Commission.

If you would like to learn more about carnivorous plants or other native plants, connect with the Arkansas Native Plant Society or the Arkansas Master Naturalist program. Witsell and his colleagues often lead field trips for these organizations to view many of Arkansas’s native plants.

Arkansas is loaded with fishing hot spots, but some are only accessible...