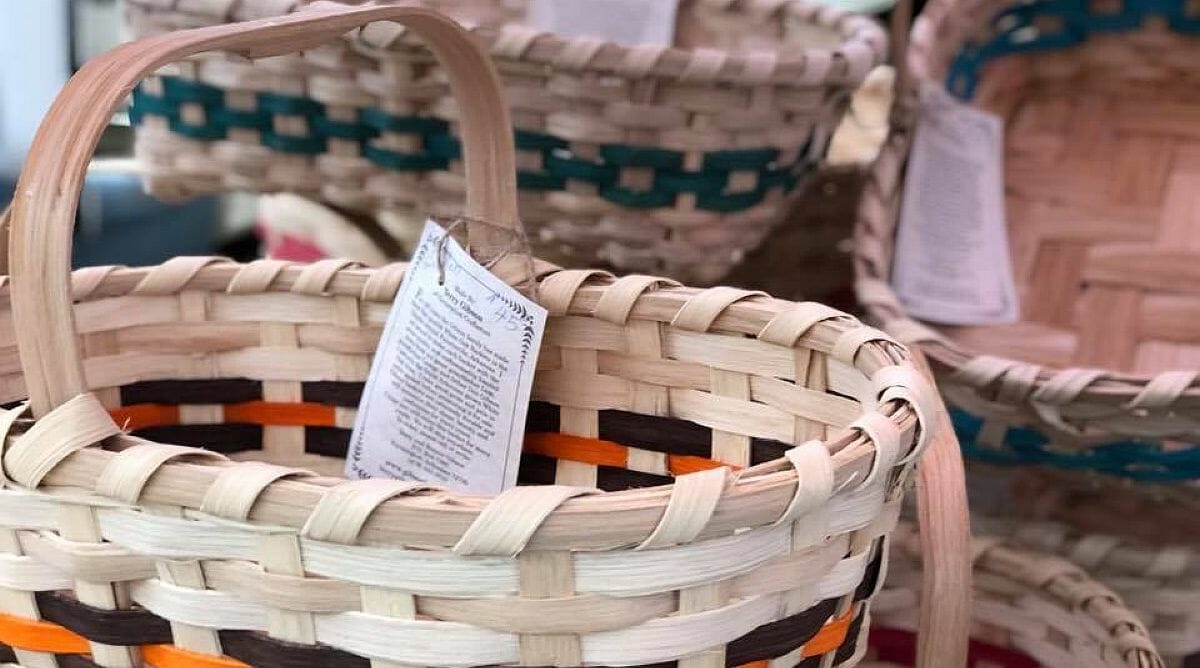 Archeological studies have found that baskets have been a domestic necessity in the Ozark Mountains since at least the Archaic period (600 – 8500 B.C.). The earliest peoples to inhabit the land now called Arkansas used various local organic materials to weave baskets to store and carry food and other items. Modern Arkansans like Terry Gibson are also making utilitarian and decorative baskets, carrying on the tradition of passed down through his family since the 1800s.

Terry is the current maker-in-residence at Gibson Baskets in Farmington, Arkansas. He comes from a long line of basket-makers that reaches back at least four generations to Christopher Columbus “Lum” Gibson. Lum was born in 1865 and settled near Spring Valley. It was there that he originated the basket design that the Gibson family is known for: a herringbone design on a rectangular base, a thickly-carved handle, and a construction that doesn’t use nails.

Terry says he has made 30 different kinds of baskets over his lifetime. The largest basket available on their website is a large laundry hamper with a lid. According to Terry, one hamper can take two to two-and-a-half days to complete. The first step is creating a large number of hand-cut strips the right length and thickness. Next, the bottom is constructed and allowed to “season” a bit. Seasoning the basket allows the moisture from the freshly-cut strips to dissipate. It tightens up the weave and usually results in a little bit of shrinkage. Once the basket base is seasoned, a lid must be made to fit each specific hamper, as no two baskets will be finished to exactly the same dimensions.

In 1986, Terry was invited to make 50 baskets for the National Governors’ Association’s New Governors’ Seminar in Little Rock. The baskets were filled with Arkansas-made items and given to visiting delegates at the seminar. This request was reminiscent of his grandfather, George’s, invitation to exhibit his skills in Washington, DC, at Smithsonian Institution’s Fourth Annual Festival of American Folklife in 1970. George, who was called the “premier split oak basket maker of the Ozarks,” achieved national recognition when he was invited to demonstrate his basket-making skills at the summer-long event.

The following year, George was again called upon by the Smithsonian. This time, he represented the “Dixieland region” of the United States at the Visit U.S. Pavilion on St. Helen’s Island, Montreal, Canada. For this event, George created a sample of each of his basket types, including some that had not been produced for many years. That collection is now housed at the University of Arkansas Museum in Fayetteville. Some of George’s baskets are also in the collection of the Smithsonian Institution’s Museum of American History in Washington, DC.

George Gibson in his workshop in 1962.

Gibson baskets have always been made from white oak sourced in the Ozarks. In the early years, the Gibsons felled and milled their own timber, cutting the strips themselves that were then processed so they could be woven into the beautiful end-products they then sold around Arkansas. Today, Terry says his friends in the timber business let him know when they find a particularly good stand of white oak, and let him pick the trees he wants before they’re taken to local mills for processing.

Don and Ann Gibson in their workshop with baskets in various stages of production.

At the height of his career, Terry and his wife, Bonnie, worked with Terry’s parents in an assembly-line production process that supported both households. The family sold baskets around the state. Longtime Arkansas travelers who drove old Highway 71 over the mountains between Alma and Fayetteville might remember the family’s basket shop in Brentwood. It was in business for approximately 50 years, by Terry’s estimation, run by two of his uncles.

Today, Terry is carrying on the tradition, but selling primarily at the Fayetteville Farmer’s Market on the historic downtown square during the summer season. His baskets are also available online when the market isn’t open. There you’ll find the popular designs like the double-pie basket and laundry baskets, as well as lesser-known creations like two-plate and swivel-handle cake baskets.


Aside from a cousin who has a little basket shop in Jasper, Terry thinks he’s probably the last in his family’s long line of basket-makers who will make a living at the craft. His is a legacy to be proud of, and his work is a testament to the creative spirit that makes Arkansas a beautiful place to be. Naturally.