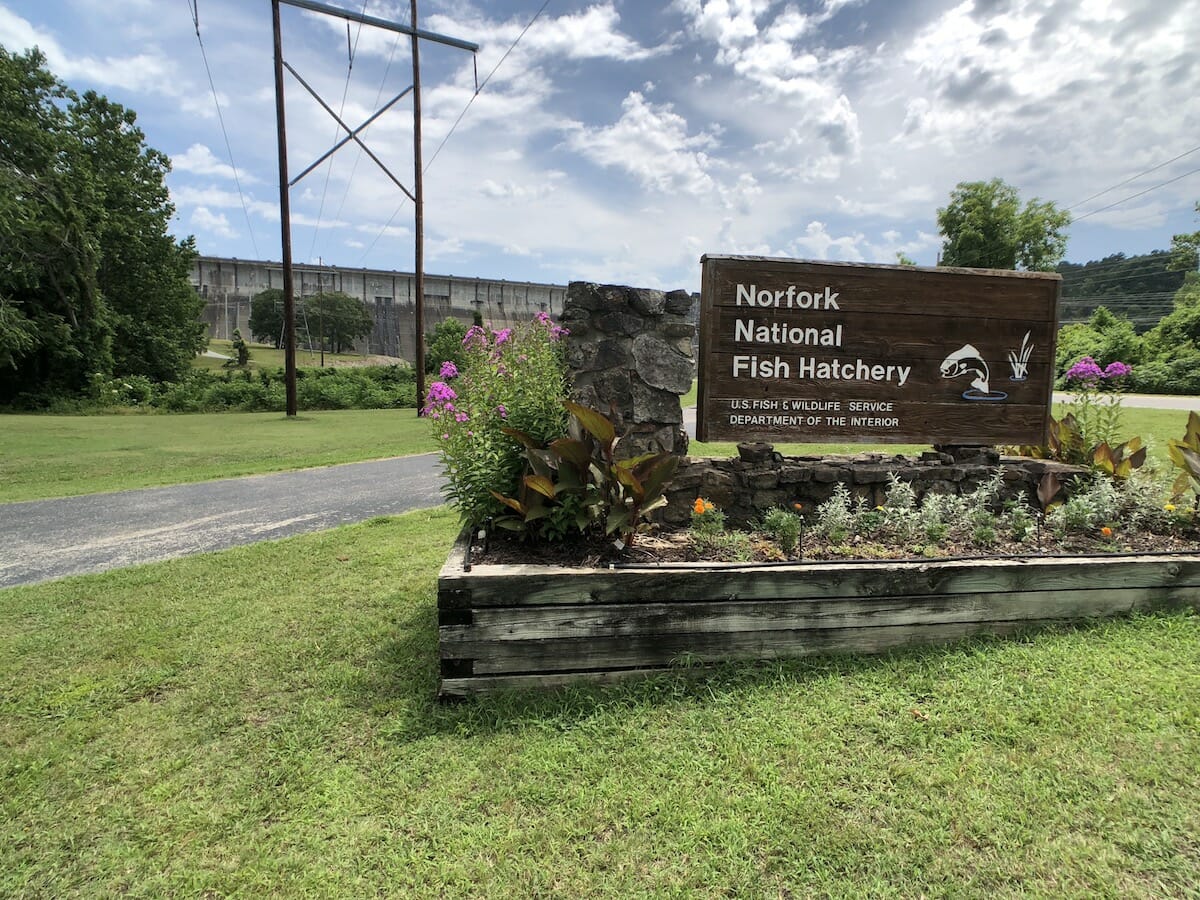 When driving to the Norfork National Fish Hatchery, the Norfork Dam is visible first regardless of the direction taken to approach. Stretching across the North Fork of the White River, the dam creates and holds Lake Norfork behind it. Nearly in the shadow of the dam is the Norfork National Fish Hatchery, where biologist Jon Casey leads a small team of staff and volunteers of all ages in daily operations to mitigate the ecological implications of the dam, while also providing opportunities for education and recreation to the region.

It is fitting that the dam garners first notice over the National Fish Hatchery, as the construction of the dam in the early 1940s is what made necessary the establishment of the Norfork hatchery in 1955. The damming of the river, as well as the creation of other dams along the White River, turned warm streams cold, modifying the habitat of native fish such as smallmouth bass, bluegill and catfish. Populations of fish dwindled in response, and the US Fish & Wildlife Service saw the need for a hatchery to introduce and maintain regional waterways with populations of cold water fish: trout.

Three kinds of trout — cutthroat, brown and rainbow — begin as eggs hatched in the facility. They spend the next few months growing in indoor tanks until they are 2-3 inches long, after which they are relocated to the nearly 100 outdoor raceways to live in simulated streams until they reach a length about 11 inches long, around 22 months. Upon reaching adulthood, trout are transported by truck, and occasionally by raft, to various waterways, largely to locations below dams in Arkansas and Oklahoma for disbursement.

In addition to the daily functions toward achieving the mission of raising and stocking trout, the hatchery provides endless opportunities for youth education events. In April, the hatchery hosts school groups. They receive a tour of the facility, use a net in Dry Run Creek to catch and study macroinvertebrates, the aquatic insects that trout eat, fish in the creek, dissect and identify trout, and learn about non-point pollution. Also for schools, the hatchery has partnered with Trout Unlimited to supply a 50-gallon aquarium, chiller, filters and trout eggs in a Vibert Box in a program called Trout in the Classroom so students may witness the life cycle and development of fish. For college students, the hatchery hosts a career day to allow prospective biologists to examine potential career paths available to them.

The hatchery participates in the Cotter Trout Fair and also holds special events, including an annual fishing derby each June for kids age 15 and under, with prizes and trophies for those in each age group who catch the largest size or greatest quantity of fish in Dry Run Creek. Tanks are prepared for younger kids, age 2-5 years, to fish in, and a free lunch is provided for all children and adults. The recent derby saw 150 children fish, some learning for the first time.

The Norfork National Fish Hatchery’s most anticipated event is the Hatchery Outdoor Adventure day, an event that seeks to connect children 15 and under with outdoor pursuits. This festival-like event includes vendors and booths, contests, instructional courses on fish, animal pelts and bat exhibits, and activities such as Japanese fish painting, construction projects (including making insect boxes) marksmanship with Daisy BB guns and pneumatic archery, and, of course, fishing. Casey says they have even borrowed unused raceways to have kayak races. Last year, this event drew over 700 children. The Hatchery Outdoor Adventure is held the first Saturday after Labor Day; this year it will be September 8.

There are several opportunities for volunteering with the hatchery. Anyone interested may join the Friends of the Norfork National Fish Hatchery and help around the facility or by manning the visitor’s center. The hatchery premises include a location for RVs to be parked, so that volunteers from all over the country (recently, from Florida, Oklahoma, Texas and Nebraska) can stay for several months, working 24 hours a week. The hatchery often hosts college interns as well as volunteers from the Youth Conservation Corps, who work for eight weeks feeding fish, assisting with maintenance and cleaning raceways and tanks.

Even apart from field trips and special events, the hatchery is a busy place, open for visitors every day between 7 a.m. and 3:30 p.m. This includes weekends but does not include Federal Holidays. The facility is wheelchair and stroller friendly, and families enjoy visiting and bringing lunch. Picnic tables are located along Dry Run Creek, an attractive and lively stream next to the hatchery. Catch and release fishing in Dry Run Creek is available for children 15 years old and younger and for mobility impaired persons with a fishing license, the creek features a boardwalk.

From all this, it is evident that Casey extends the hatchery’s functions beyond raising and stocking trout. He and the hatchery do even more than educating young people, hosting out-of-town volunteers and keeping the hatchery and creek accessible for recreation. They have planted butterfly gardens, which have been an immediate and lasting success for monarch butterflies and caterpillars. They supply trout to a local raptor rehab where bald eagles are treated. And the hatchery is working on a project to bolster the numbers of the endangered pink mucket mussel at marina locations in Lake Norfork. This is all in addition to their normal duties and all the educational and special events the hatchery has! What more could the esteemed hatchery possibly take on? As a matter of fact, the hatchery also has the distinction of being a favorite local spot for graduation and prom pictures to be taken, and Casey informs me that weddings may be held for free on the hatchery grounds.