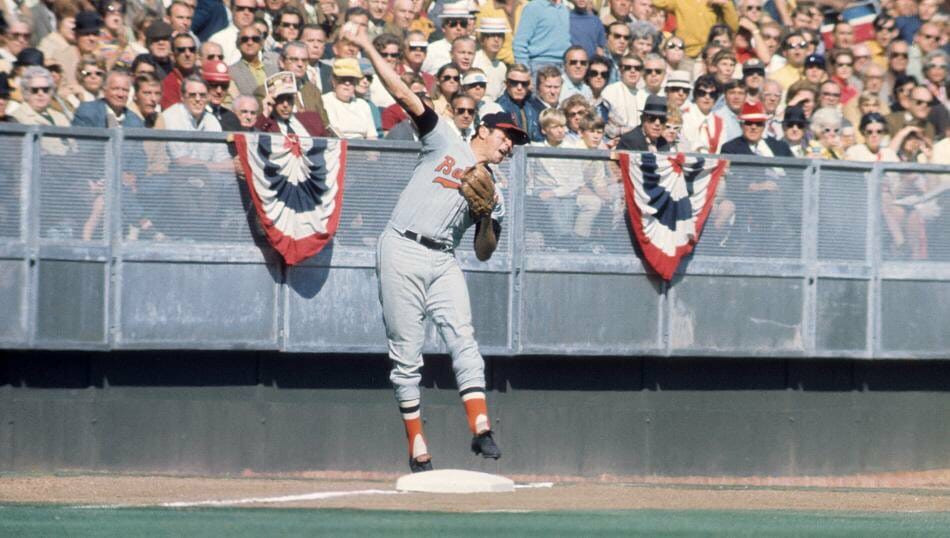 Brooks Robinson is an ordinary-looking man who might have worked in a bank or sold cars but instead played a third base that defied logic and all physical laws. Like if Tom Hanks played basketball like Michael Jordan. The most amazing thing about him is that after about 30 years of living in his hometown, among people who know and have had dealings with him, I’ve never met anyone with a qualm or doubt about Mr. Robinson’s authenticity or generosity. He seems to me a living Boy’s Life cover, the epitome of decency and hero of our country. – Philip Martin, Arkansas Democrat-Gazette.

In late November 1970, Arkansas prepared to welcome home its favorite baseball son. Little Rock’s Brooks Robinson had been named World Series MVP a month earlier, leading the Baltimore Orioles to the championship over the Cincinnati Reds. In the five-game series, he batted .429, with two home runs, and six runs batted in. To those watching on TV and perhaps more obviously to the Reds, he also made countless unimaginable defensive plays at third base. Reds manager Sparky Anderson would later quip, “I’m beginning to see Brooks Robinson in my sleep. If I dropped a paper plate, he would pick it up on one hop and throw me out.”

Of course, the formal hometown welcome would include receptions, mayoral proclamations, and a few speeches, but as might be expected of Brooks Robinson, several hours would be spent at Lamar Porter Field signing hundreds of free autographs. Among those in the autograph line was nine-year-old Doug Menz. The broad smile on his face standing in front of Brooks Robinson was front-page news in the Arkansas Democrat the next morning. Fifty years after that memorable day, Menz revisited his priceless autographed baseball and carefully unfolded the fragile brown newspaper photo. The excitement in the young boy’s expression was still vividly obvious in the crumpled newspaper. A young boy’s affection for Brooks Robinson reflected the feelings of an entire state.

“Brooks Robinson is a goodwill ambassador for his state who inspires youth everywhere, especially in Arkansas.” – Governor Winthrop Rockefeller (1970)

“I was 16 when Brooks dominated the 1970 World Series. I think through all of the 1960s and into the ’70s most if not all Arkansans considered the Baltimore Orioles their second team after the Cardinals. This feeling reached a crescendo in game one of the 1970 World Series when Brooks put on such a fantastic fielding display. When he went far wide of third to snag the liner by Lee May and then threw to first, thousands at home stood from their seats along with the crowd at the ballpark.” – Mike Dugan, Chairman, Hot Springs Baseball Weekend

Leader of the “Baby Birds”

The decade of the 1960s would launch a remarkable period in Baltimore Oriole history. Over the next 18 seasons, the Orioles would win six American League pennants or division titles, two World Series championships, and finish in the first division 16 times. The one constant during that successful run was Brooks Robinson. The young Orioles of that decade were called the “Baby Birds,” and Brooks Robinson was clearly the leader of the flock. His character, competitiveness, and work ethic inspired the young team to unexpected success.

Brooks opened the decade by hitting .294 and led the team in most offensive categories. The Baby Birds were in first place much of the 1960 season, before fading in September to finish second behind the more experienced Yankees. The Orioles’ 23-year-old third baseman, who had spent two months in the minor leagues the previous season, was third in the Most Valuable Player voting. Brooks no longer had to be concerned about being demoted to the minors or look to see if his name was on the lineup card.

His renewed confidence may have enabled him to ask out the attractive flight attendant he noticed on a team flight to Boston. Making Connie Butcher his teammate for life after the 1960 season may have been his best play of the year.

Brooks continued his personal ascension to stardom during the first half of the 1960s. By 1964, he redefined defensive genius at third base and became one of the league’s most productive hitters. His .317 batting average, 28 home runs, and 118 RBIs along with his reputation as “The Human Vacuum Cleaner” at third base earned him the American League MVP Award.

Despite having one of baseball’s most valuable players in the lineup, the Orioles routinely found a position behind the Yankees in the pennant races. The Baby Birds needed some help and on December 9, 1965, that help arrived.

The “Robinson Boys”, couldn’t have been more different in personality or style, but baseball brought them together. They played the game as teammates and learned that great teammates and great friends brought out the best in each other. – Roy Firestone

What the Orioles needed was “another Robinson” in the middle of their lineup and that is exactly what they found. In a trade that has become the standard exemplification of a bad baseball decision, the Cincinnati Reds traded their best player, Frank Robinson, to the Orioles for two pitchers and a journeyman outfielder. Frank joined Brooks to lead the Orioles to the most successful period in franchise history. Sportswriters immediately dubbed the pair, the “Robinson Brothers.” Ironically, none of the players the Reds received in the trade were in Cincinnati three years later.

“Bad trades are a part of baseball. I mean, who can forget Frank Robinson for Milt Pappas?”
– Annie Savoy (Susan Sarandon), Bull Durham 1988

If there was any concern about Brooks Robinson’s reaction to having another superstar on “his” team it was dispelled by his introduction the first day the two met at spring training, “Welcome to the team Frank,” said Brooks extending his hand, “You’re just what we needed.” Despite the cultural differences between an African American from the playgrounds of Los Angeles, and a middle-class white southerner from segregated Little Rock, Arkansas, the Robinsons developed a lifetime bond predicated on mutual respect.

Frank Robinson had an immediate impact on the Orioles. No longer the Baby Birds, with Frank and Brooks Robinson leading the way, the Baltimore Orioles won the 1966 World Series over the seemingly invincible Los Angeles Dodgers. Frank Robinson was named American League and World Series MVP. Brooks was an All-Star for the seventh time, received his seventh Gold Glove, and was second in the league MVP voting.

“…I know he hit well in the Series, but what I remember most are all the great defensive plays he made at third base, robbing the Reds of several hits. I was nine year’s old. That’s when I first understood a baseball player could dominate a game with his glove as well as his bat.
– Bob Holt, Arkansas Democrat Gazette

The Orioles won another pennant in 1969, but lost the series to the “Amazin’ Mets.” The next fall they won their second title in the World Series that proceeded Brooks’ homecoming. Although he later suggested that winning the Orioles first title in 1966 was his fondest memory in baseball, it was the 1970 World Series that solidified his place among the all-time greats in baseball history. That fall classic, with various generations of Arkansans glued to their televisions to watch their home state hero, Brooks’ solidified his stature as Arkansas’ favorite baseball son.

In the five-game series, Brooks hit the go-ahead home run in game one, two doubles in game three, and another home run in game four. Perhaps more impressively, he seemed to make spectacular defensive plays in every inning. Brooks Robinson’s play in the 1970 World Series would become one of the most memorable performances in baseball history.

Brooks would play seven more seasons for the Orioles and be chosen for induction into the Baseball Hall of Fame in1983. In a fitting climax to Arkansas finest hour in Cooperstown, New York, Brooks was joined as an inductee that day by his boyhood hero, another Arkansas-born third baseman named George Kell.

“When most of us think of Brooks Robinson, we think of his outstanding career with the Baltimore Orioles and his amazing MLB accomplishments, I think of a man who selflessly served his nation in the U.S. Army, whose hard work put him on the Mt. Rushmore of Arkansas athletics, whose loyalty to his team is something we don’t see in sports today, and whose generous spirit and grit represent what it truly means to be an Arkansan, through and through.” – Congressman Steve Womack.

For Part I, go to Growing Up “Brooks.”

Note: Thanks to all the contributors. Coming next is George Kell!