Growing up “Brooks” – Part I on Brooks Robinson 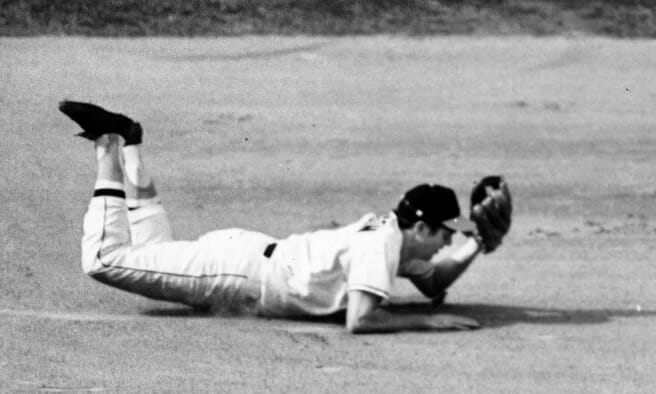 He’s still a folk hero in Arkansas; He could have beaten me for governor if he had decided to run. It would have been no contest — a real lay-down.” – President Bill Clinton (1993) of Brooks Robinson

Having a “favorite” baseball player is risky business. Along with being emotionally attached to his success and failure on the field, comes the vulnerability of being personally dispirited by some character flaw you feel obligated to defend.

The ultimate risk comes when you actually meet the person behind your adulation. Often, in a long autograph line or chance encounter, the reality of the handshake and a sentence you practiced to introduce yourself, fall far short of your expectations. However, ask an Arkansas baseball fan over 50-years-old about Brooks Robinson. In fact, ask anyone of any age. Now 83-years-old and long retired, Brooks Robinson carries the affection of an entire state and never seems to disappoint.

“Like so many Arkansans of my age and older, my favorite baseball team has always been the Cardinals. But my American League team has always been the Orioles, and that’s because my father would constantly note when I was a boy that Brooks Robinson was from Arkansas. I think all Arkansas baseball fans still take great pride in the fact that Brooks hailed from here.” – Rex Nelson, Arkansas Democrat Gazette

Brooks Robinson’s roots are in the Atkins Bottoms, near a bend in Highway 105 once called Wilson, Arkansas. His father, Brooks Calbert Robinson, was born there in 1914, the same year and about a mile down the road from the birthplace of future major league pitching great Ellis Kinder. After the flood of 1927 and the Great Depression, the Kinders survived in Wilson picking cotton, but with no such prospects, Brooks’ father moved with his widowed mother to Little Rock.

In 1935, the elder Brooks Robinson married a Little Rock girl named Ethel Denker and settled in a neighborhood a short walk from newly constructed Lamar Porter Field. The new family welcomed their first child Brooks Calbert Robinson Junior on May 18, 1937. Born in a city that loved baseball and growing up in a simpler time when unscheduled summer days revolved around baseball, Brooks Junior was in the right place at the right time.

The younger Brooks Robinson attended Little Rock High School (renamed Central High in 1955) where he was remembered as a modest, well-liked, and friendly classmate. There was no high school baseball in those days, but Arkansas Sports Hall of Fame Historian Jim Rasco remembers watching Brooks as a standout basketball player. “Brooks was a very good basketball player.”  “He was All-State as a junior and Dell Basketball Magazine named him as one of the top basketball players in the state in its 1955 “Preview” magazine.”

Despite being recruited by the University of Arkansas as a basketball player, Brooks was a baseball player at heart, a fact he had documented in an eighth grade English paper on future career choices. Brooks and his Lamar Porter gang won American Legion State Championships in 1952 and 1953 playing for the legendary Little Rock Doughboys. The Doughboys had been around since the 1920s. Brook’s father had been a Doughboy and they were the city’s only team.

We all knew Brooks was a gifted baseball player, but the thing we remember most is that he was a great teammate and a special guy. He never forgot his childhood friends and we never forgot him. Brooks almost always made our high school reunions and stayed in touch with his buddies from Pulaski Jr. High. I feel very fortunate to have a great relationship with Brooks. He is the best of the best in all aspects of life. – Childhood friend and teammate Robert Nosari

I shall never forget pitching against a future Hall of Famer. I sent him a photo later and told him the story of me pitching against him. He was gracious and sent it back with a kind note. If there were scouts in the stands that night, I helped Brooks get to the majors. Brooks is a good man” –  Don Duren Historian and Author

High school graduation at Little Rock High took place on May 26, 1955, and two days later Brooks signed a contract with the Baltimore Orioles. The Orioles were a choice the Robinson family made carefully and it was obviously an excellent choice. Brooks would play in Baltimore in 23 seasons and almost 2,900 games.

The 18-year-old kid the Orioles got in 1955 was already a good fielder, but he never felt like a natural hitter. Brooks described his hitting as a work in progress that he never mastered, “I could field as long as I can remember, but hitting has been a struggle all my life.”

Brook’s first professional assignment was in York, Pennsylvania, where he hit .331 for the Class B White Roses. After his unexpected success at the plate in York, Robinson may have thought he had underestimated his hitting ability. That confidence was likely reinforced when he got two hits and drove in a run the first game of his late-season promotion to the Orioles. He batted 18 more times that September, and went hitless with 10 strikeouts. His major-league glove and inability to hit big-league pitching would routinely create temporary big-league trials and minor league demotions until the summer of 1959.

Robinson would look back on 1959 as the turning point in his career. It was a season of bitter disappointment, career-threatening injury, and unpredictable success. He had served in the Army National Guard during the winter of 1959 and reported late to spring training. Physically fit but unprepared for baseball, he ultimately lost his third base job. In early May with his batting average hovering around .200, Brooks got the familiar summons to manager Paul Richard’s office. He was headed down the minors in what he later described as the worst day of his career.

As Richards had expected, Robinson’s hitting improved immediately at Vancouver, but another disheartening crisis lay just ahead. On May 17, Brooks toppled over the dugout rail chasing a foul pop up and impaled his right bicep on an uncovered netting hook. Fortunately, he fell into the Vancouver dugout and teammates rushed to support his weight as blood poured from the gash in Robinson’s upper arm. It would take about a dozen stitches and a couple of weeks of rehab to get back on the field, but the hook had miraculously missed the nerve in his throwing arm by an inch.

Brooks returned to the Orioles in August and carried the momentum of his rehabilitated hitting into unexpected late-season success. He hit .345 for the last month of the season to finish with a respectable .284 batting mark. Despite the demoralizing low points, 1959 was the year Brooks Robinson became “Brooks,” and joined the “one name” stars of the day. Mickey, Willie, Hank, and Stan the Man welcomed him to the club. “Brooks” not only became a name synonymous with third base wizardry and timely hitting, but the highest standards of personal character. Arkansas beamed with collective pride.

“When most of us think of Brooks Robinson, we think of his outstanding career with the Baltimore Orioles, a 16-consecutive Gold Glove Award winner, a World Series MVP, and a Baseball Hall of Famer, just to name a few of his long list of accolades. On top of his amazing MLB accomplishments, I think of a man who selflessly served his nation in the U.S. Army, whose hard work put him on the Mt. Rushmore of Arkansas athletics, whose loyalty to his team is something we don’t see in sports today, and whose generous spirit and grit represent what it truly means to be an Arkansan, through and through.” – Senator Tom Cotton

Note: Special thanks to all the contributors, and to Doug Wilson, Author of Robinson biography, Brooks, for help with the photographs.

4 responses to “Growing up “Brooks” – Part I on Brooks Robinson”