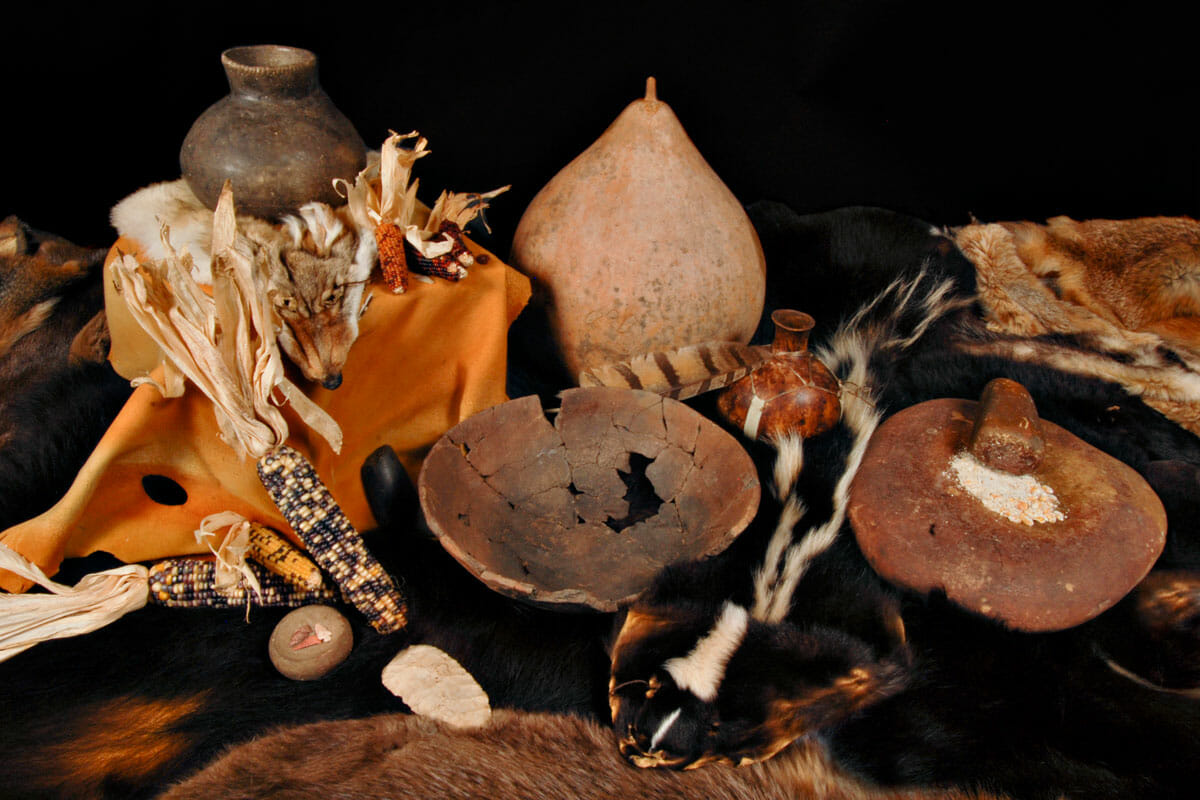 It’s January, and it seems that everyone is either talking about their New Year’s resolutions, or saying that they won’t make any resolutions this year. But maybe there is an alternative to both of these options. Instead of making a list just like last year’s, and then abandoning it by the time you’ve done your taxes, here’s an Arkansas Bucket List that you’ll enjoy checking off – one for each month of the year.

Meet the First Arkansans in January

Arkansas, being centrally located along a major waterway between the Midwest and southern gulf coast, is thought to have been occupied by a number of Native American tribes since approximately 9500 B.C. When Spanish explorers arrived in the 1500s, tens of thousands of people were living in villages near the Mississippi River and in communities around the state, and the Toltec Mounds, a National Historic Landmark, is one of the largest archaeological sites in the Lower Mississippi River Valley.

Meet a Masterpiece in February

Crystal Bridges Museum of American Art is worth the drive to Northwest Arkansas, and can easily fill a whole day with its temporary exhibits, classes and lectures, permanent galleries, restaurant, and 3.5 miles of walking trails. The latest (and largest) addition to the “collection” is the Bachman-Wilson House, designed by Frank Lloyd Wright. When the home suffered repeated damage from flooding of a nearby river in New Jersey, the museum bought the home and relocated it to a picturesque spot amongst the dogwood trees where it can be toured free-of-charge (reservations recommended).

Hike to Hawksbill Crag in March

An iconic location, seen by millions on postcards and brochures for decades, Hawksbill Crag is not as remote or difficult to access as you might think. It’s a three-mile roundtrip hike on the Whitaker Point Trail, and is beautiful year-round (although spring and fall are the seasons when it’s really showing off.) This is not a hike for your young kids or teens who like to goof around, as it can be extremely dangerous along the bluffs and on the point itself, but still a fantastic photo-op for any Arkansas bucket list.

Float the Buffalo in April

Arkansas is blessed with an abundance of scenic waterways – in fact, there are seventeen rivers listed on the state parks website that provide great scenery and a variety of water conditions for all levels of enthusiasts. The Buffalo River, the first river in the United States to be designated a National River, offers an amazing backdrop to its 150 mile ramble through the Ozark Mountains, with most of its stretches being ideal for families and novices. Contact an outfitter or look online for information on seasonal river conditions and a list of necessities for a successful day on the river.

Smell the Roses Magnolias in May

In April and May the magnolia trees that line Bath House Row in Hot Springs are in bloom, and the air is loaded with their sweet, citrusy scent. The trees have been blooming along Central Avenue for decades, and now the bathhouses are coming back to life as well. Be sure to check out the Hot Springs National Park visitors’ center located in the Fordyce Bath House for an interesting look at the history of the bath houses, their guests, and a free tour of the still-intact dressing and bathing rooms.

Dig for Diamonds in June

Before it gets too hot this summer, make plans to visit Crater of Diamonds State Park to do a little digging. You know you’ve been meaning to, and this is the year to get it done! Last June, a visitor found an 8.5 carat diamond – the fifth-largest diamond found at the state park since it opened in 1972 – surely there are more where that came from. You’re welcome to take your own tools, or rent them at the park for a nominal fee. Don’t forget the sunscreen.

Get Back to Your Roots in July

Way off the beaten path in Mountain View is a place that literally cannot be replicated anywhere else. The Ozark Folk Center State Park is just what the name implies – a showcase for artisans employing traditional methods of crafting and creating that have been used for generations in our own Ozark Mountains. Makers and musicians live onsite and offer workshops as well as doing the business of creating and selling their art. You’ll see everything from candle and soap-making, to gun and metal-smithing, weaving, doll making, wood-carving, and many, many more.

Dine on the River in August

If paddling in a tiny boat isn’t your idea of a good time on a river, you might prefer an afternoon or evening cruise on the Mark Twain in Little Rock instead. The authentic paddle wheeler offers open top deck seating, a dining space, and even group charters for special events or large groups, and features narrated sightseeing tours visiting spots you can’t see from shore.

There are too many trails in Arkansas to list them all by name, but the Ozark Highlands Trail (OHT) is definitely worth adding to any outdoor-lovers’ list. You can hike the entire trail all in one go if you have a few weeks available (some areas require expert bushwhacking and navigating skills), or break it up into sections. It winds through the Ozark Mountains for 218 miles, taking hikers through some of the most scenic areas of the range while crossing 66 named creeks and streams, and passing hundreds of seasonal waterfalls.

Ride the Rails through the Boston Mountains in October

When Interstate 49 from Alma to Fayetteville (and beyond) was completed, the shorter route put some of the most scenic views of the Boston Mountains out of sight of travelers, but one of the best ways to navigate the mountains doesn’t require a car at all – you can ride the train. The Arkansas-Missouri line runs between Springdale and Van Buren daily, with three ways to travel – in a refurbished vintage Pullman coach, in a parlor car from the 1950s, or in a 1940’s restored B&O cupola caboose. October is an ideal time to view the foliage, and the trip is enjoyable for all ages. All aboard!

Visit a Vineyard in November

From Little Rock to Alma, along the Interstate 40 corridor, there are eight wineries taking advantage of the mild temperatures and fertile soil in the Arkansas River basin. They provide a wide range of wine varieties sure to satisfy any palate. You’ll find reds, whites, sweet and dry and even non-alcoholic juices. Besides tasting rooms and tours, some wineries have restaurants, bed and breakfasts and event facilities. Learn more about Arkansas grapes here.

Remember the Man in Black in December

Johnny Cash wasn’t a household name when he lived in the tiny Dyess Colony, a small federal agricultural resettlement community between Jonesboro and Memphis in the Arkansas Delta. But the young boy was influenced by his surroundings and the circumstances of the nearly 500 families who lived in Dyess as they struggled to get back on their feet after the great depression of the early 1930s. The Cash family home is one of eight A-State Heritage Sites managed by Arkansas State University, and has been restored and furnished as it would have looked when the Cash family lived there.