The Crescent Hotel: Grand Old Lady of the Ozarks 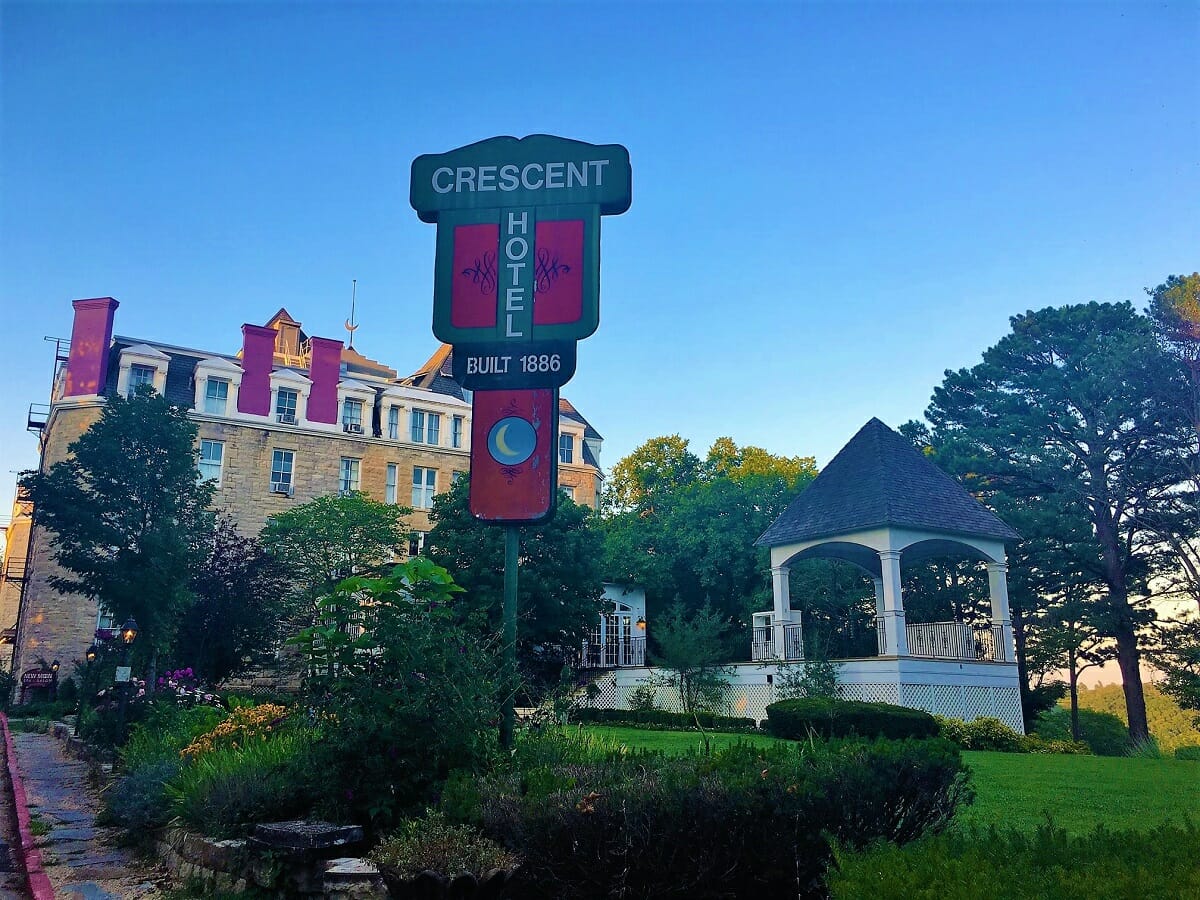 My first memory of the Crescent Hotel in Eureka Springs was when I was about the age of 5. I remember there was a giant cat that purred and brushed against my ankles, and as I gazed at the dark woodwork and twinkling lights in the lobby, I thought we were staying in a castle. By a stroke of luck, the man at the front desk gave us the honeymoon suite. It had dark red curtains and a balcony, and to my great childhood amusement, a giant mirror on the ceiling above the bed.

At some point my parents tried to persuade me to take a nap, and as I lay there gazing up at myself in the mirror through a pair of sunglasses I’d poked the lenses out of (this was during my brief stint as a female Clark Kent), I remember asking, “Why is that mirror up there?”

My mom replied, “Don’t worry about it. Go to sleep.”

It was a question and answer session far beyond my five years, and it was also the day I decided I wanted to live in the Crescent Hotel forever. When other people tell me “I just adore that place” I want to respond, “Yes, but did you love it during the 80’s when there were dodgy mirrors on the ceiling? Well, I did!” What I feel toward the Crescent is an aggressive proprietary sort of love, a “ride or die” level devotion. When I stand out front gazing at the giant metal crescent moon and the welcoming lights from the front porch, it just feels like home.

The Crescent Hotel was built in 1886 by the Eureka Springs Improvement Company and the Frisco Railroad. It was a time when thousands of visitors flocked to the healing waters of the Ozark springs in hopes of healing their diseases. The Crescent Hotel catered to these visitors, a luxurious Victorian era resort that boasted a stable of horses, dances, picnics, an in-house orchestra, and horse-drawn carriage rides to the nearby Sanitarium Lake.

The hotel itself was designed by a well-known Missouri architect, Isaac Taylor. It was constructed out of native limestone from a quarry site on the White River in nearby Beaver. The density of the stone was so thick that a group of specialists from Ireland were brought over to advise on construction. With walls 18 inches thick and fitted without mortar, the Crescent was built to stand up against the hands of time. The interior was furnished in the beautiful Victorian era style, with 78 rooms, Edison lamps, electric bells, heated steam and an elevator. She reigned there on top of her mountain, overlooking the Victorian town of Eureka Springs below her, for a shining 15-year period of opulence and grandeur.

But alas, the prosperity didn’t last. After the turn of the century Eureka’s healing waters were no longer believed to possess the ability to cure the sick, and slowly people stopped journeying to the beautiful resort. The Crescent was closed and fell into disrepair.

In 1908, however, the Crescent reopened as the Crescent College and Conservatory for Young Women. The school operated from fall to spring, and then during the summer season, the Crescent continued to operate as a resort hotel. Women from well-off families traveled from all over the country to attend, and local girls were able to study as day students. The cost was between $270 to $375 a year. Thanks to a fascinating Facebook page, we can still read interesting stories about the women who attended the Crescent Conservatory.

Due to the hard times during the Depression, the college was closed in 1924. After sitting abandoned for the next six years it was briefly reopened as a junior college from 1930 to 1934, but that too closed.

In 1937, a man named Norman Baker bought the hotel and opened a cancer hospital. What can we say about Norman? He painted the beautiful hotel various shades of purple and lavender. He had a penchant for calliope music and stationed one on the roof so that its tunes drifted down into the town and through the nearby hills. He was, for want of a better word, eccentric and creepy. He was also a charlatan of the darkest nature. His hospital promised cures for cancer, even though he had no medical training and had already been convicted of practicing medicine without a license in Iowa. While being investigated for mail fraud, it was estimated that Baker was making as much as $500,000 a year selling “elixirs” while his patients died from a lack of reputable care. The hotel was shuttered in 1940 when he was arrested and sentenced to prison in Leavenworth, Kansas.

The Crescent once again sat empty during the war years until 1946 when a Chicago businessman purchased the property and reopened the hotel. Despite a tragic fire in 1967, the hotel continued to stay open and changed hands numerous times. In 1997 Marty and Elise Roenigk purchased it, pledging to restore the Grand Old Lady to her former glory. They were true to their word.

The rooms were renovated, new systems were added, and it once again hearkens back to its original Victorian glory days. Hundreds of weddings are conducted inside the hotel and outside on the manicured lawns. The New Moon Spa, located on the basement level, provides an expansive array of spa services. Guests can dine in the ballroom amid dark paneled walls, sparkling chandeliers, and views of the Ozark mountains. A ghost tour offers guests the opportunity to roam the halls, learning about her history and the dark days of Doctor Baker with a trip to the former morgue.

And while I’ve heard the spooky stories and enjoyed the tour, I’ve always felt certain that if there are ghosts inside the Crescent, they’re of the friendly nature. I still feel as comfortable and at home within her walls as I did as a five-year-old with unfortunate fake glasses.

For more information about the Crescent Hotel, the New Moon Spa, and the on-site ghost tours, visit them at http://www.crescent-hotel.com/. There are no longer mirrors on the ceilings (that I know of), and Doc Baker’s roof calliope is gone, but I can promise you there is no lack of quirky, fascinating, and unique features at the Crescent Hotel. A stay there ensures you will become a lifelong fan of The Grand Old Lady of the Ozarks.

9 responses to “The Crescent Hotel: Grand Old Lady of the Ozarks”