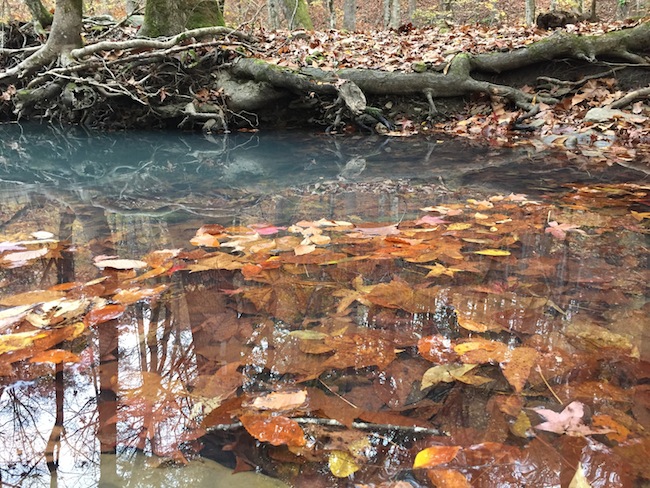 The Ozark Highlands Trail (OHT) winds 165 miles from Lake Fort Smith State Park to Woolum, covering terrain in the Ozark National Forest and the Buffalo River Wildlife Management Area to the Buffalo National River. The trail was established after the 1968 National Trail System Act and has been maintained by the Ozark Highlands Trail Association, a volunteer network. A lovely expository article in National Geographic states the trail can be hiked in 10 days to two weeks by an experienced backpacker; but two Jonesboro residents, Jackson Spencer and Dylan McAlister, hiked it together in four and a half days.

The two men hiked the trail in November in an experience described by Jackson as “exceptionally miserable” and by Dylan, who joined the hike last-minute, as “exquisite suffering.” They hiked from 4 a.m. to 8 p.m., sleeping about six hours each night, and although the trail took them past 66 named rivers, streams and creeks and hundreds of seasonal waterfalls, Jackson and Dylan found most of the sources of running water dried up. Apart from this, they were moving fast, not allowing too much time to take in the incredible vistas as they climbed and scrambled down along the trail.

Their hard work paid off in establishing the record, however, since it seems none existed prior, and it raised awareness for a good cause: the movement to connect the Ozark Highland Trail with the Ozark Trail in Tecumseh, Missouri, creating a continuous trail over 700 miles long. The Trans-Ozark Trail would challenge and draw hikers to the region, similar to the Pacific Crest Trail on the West Coast or the Appalachian Trail on the East Coast. Gearhead Outfitters, Inc., a local outdoor retailer in Jonesboro, provided media coverage and support on Facebook and Instagram for their hike, encouraging followers to comment with the hashtag #OzarkHighlandsTrail and donating $1 for each post.

Jackson, who has his degree from ASU in graphic communications with a minor in marketing, is employed by Gearhead Outfitters, where he obtained most of his gear for the hike. Jackson has hiked the entire Appalachian Trail, along with the Camino de Santiago in Spain, a two-day hike in the Grand Canyon and approximately 44 miles of the Via Francigena in Italy; traveling is his passion.

Dylan is employed at McAlister Engineering in Jonesboro. In addition to hiking, he paints contemporary landscape scenes inspired by his hikes and enjoys mountain biking. He credits his family for his interest in hiking and has hiked Arkansas extensively, speaking from experience when he describes why hikers love the thrilling diversity of landscape and topography in AR, including massive cypress forest swamps in the southeast, rolling open terrain in the east, rugged rocky mountains in the northwest and broad table tops in the Ouachita Mountains in the southwest.

Dylan advises people who are wanting to start hiking to find a hiking partner, especially if the friend already has experience hiking. Those who are loners by nature should start by acquiring proper gear, including a backpack, boots, tent or tarp, sleeping bag and rain gear, which Dylan estimates can be purchased, new or used, around $60 and up each. Remember that, in the world of hike gear, price and quality generally correlate, and that it’s important to have the right equipment: “Gear will keep you comfortable, and in extreme cases, alive,” Dylan says.

The National Parks Association initially supported the bill to create the connected Trans-Ozark Trail, but recently vetoed it stating they wished to minimize human presence in the untouched territory. Currently, the Ozark Highlands Trail approaches 233 miles in length, including a bushwhacking stretch in the Lower Buffalo Area, as volunteers create new trail. With more support, perhaps one day someone will feel the need to set the record for the Trans-Ozark Trail.