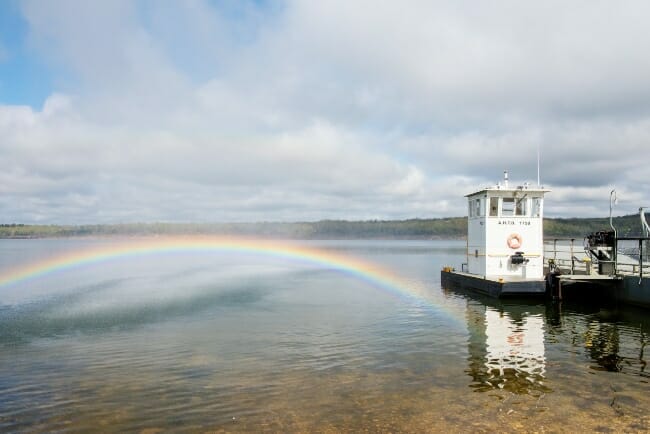 There’s always been a story in my family about a great relative of some sort running a ferry across the Cossatot River deep in southwest Arkansas. This story blended together with others, stories of moonshining relatives and rough characters, and families eking out a living on homesteads in the Ouachitas. I reached out to Lisa Childs, granddaughter of Orval Childs, and a cousin, to find out if the family story about a ferry was true. She confirmed that our relatives did run Duckett Ferry off a branch of the Cossatot River.

“First off, it will show up as Duckett Ford on maps, if it shows up at all,” Childs tells me. “And if you find maps with Duckett Ford, you’ll see other fords along the Cossatot. It’s my impression that the Cossatot River was never particularly navigable, which goes to explain why that area was so late to settle. Water was the way to get anywhere until the trains came.” Childs’ great aunt Sarah “Sallie” Duckett filed for a homestead on the Cossatot River a few weeks before she married Allen Turner Duckett, so the ferry became known as Duckett Ferry.

Photo of Allen and Sallie Duckett courtesy of Lisa Childs.

Arkansas has over 90,000 miles of rivers and lakes, all beautiful waterways that create recreational opportunities, supply water and simply make Arkansas a beautiful state. Thanks to the many bridges that span our lakes and rivers, crossing the state is easy, but this wasn’t always the case. Before bridges were plentiful, ferries were the main means of bridging waterways, and Arkansas had its share of them, from small, family-owned operations like my own relatives to large, state-funded ferries.

A ferry and steamboats cross a river. Library of Congress

When the state was still being settled, the primary way to cross a river was to use a ferry, which was simply a raft built from timber and operated by a private individual who lived near the river or tributary in question. They were generally poled across the river, with the local operator familiar enough with the river to work with the current and get passengers and their cargo safely to the other side. Ferries were gradually built better, and often local operators used flat-bottomed boats that could float across a low current but provided better protection than a raft. They also developed a cable system, where a cable was strung between two trees on either side and the operator could then use a pulley system to complete the trip.


This low water bridge allows hikers to cross the Cossatot now. Before, travelers either forded the river or used a ferry like Duckett Ferry.

These ferries often became known locally, and occasionally regionally, by the name of the owner or operator. Some of the earliest locations crossed the White River. Owners also changed, and the names of the ferries changed with them. Ferries sometimes operated within a few miles of each other and could spur competition. In his book, “Steamboats and Ferries of the White River,” author Duane Huddleston writes of Tolbert’s Ferry, in Marion County near Yellville. A man named Denton bought the ferry and it became known as Denton’s Ferry. Only a mile downriver, W.C. McBee built a ferry and added a grist mill, a cotton gin, and a warehouse and called it McBee’s Landing. Denton recognized the threat McBee’s Landing presented to him and a bitter rivalry ensued. Denton even went as far as sneaking into the landing to damage the ferry.

Some Arkansas towns still bear the names of their former ferries. Greers Ferry was named for a ferry that operated on the Little Red River. When Greers Ferry Dam was built to control yearly flooding, the name stuck. It now refers to the town, dam and lake. Other former ferry locations are now historical townships, though not presently inhabited. Van Winkle is located in Benton County. Peter Van Winkle arrived in the area in 1853. He quickly established Van Winkle Ferry on the upper White River. He also organized a lumber mill, a blacksmith shop and more. Van Winkle became one of the wealthiest business owners in the area. You can still visit historic Van Winkle in Hobbs State Park.

Steamboats once chugged up and down the Mississippi River.

Though most ferries were locally owned, a few Arkansas ferries were larger operations and steam-powered. In fact, throughout the 19th century, steamboats traveled nearly every river in the state. As railroad lines were built, bridges began spanning the rivers. This inhibited steamboat travel and eventually restricting it so much that trains effectively replaced steamboats. Ferries, however, continued to operate well into the 20th century. People still needed to cross waterways and bridges were expensive to build. Ferries were reliable, but subject to annual flooding, especially on the White River.

Congress recognized the seriousness of annual flooding and enacted a series of Flood Control Acts beginning in 1917. As a result, Arkansas built many dams to control flooding. These dams changed the nature of the rivers, formed lakes, and also affected the ferries. The dams allowed for bridges to be built and ferries became mostly obsolete. Some, though, continued to operate under the control of the Arkansas Department of Transportation.

Peel Ferry on its rededication in 2015.

In 1968, the state operated 17 ferries. In 1986, that number had dropped to four as the state replaced ferries with bridges. Today, only one ferry still operates in the state. Peel Ferry crosses Bull Shoals Lake to connect Highway 125. The ferry is free to ride. It provides a link to a former Arkansas experience that is hard to come by these days.

As for my distant relatives and Duckett Ferry, the ferry seems to have operated for many years, until the train and then cars made it obsolete. “There is a scrap of a story about Turner’s daughter, Mellie,” Childs goes on to say. “She ran the ferry across the Cossatot at times when the men were  not around.” My great aunt Mellie ferried travelers across the river when she was as young as 11 years old.

The Duckett homestead near the Cossatot and Duckett Ferry would have looked much like this square house, which was Allen Duckett’s first homestead in the area.

The Duckett place also became known when, in 1898, Deputy John Burris showed up in pursuit of two known moonshiners rumored to have a still in the mountains of Polk County. Burris left his team of horses and a driver at the Duckett homestead. Though it’s unclear if he used the ferry to cross the Cossatot, it’s likely if the river was high. Duckett Ferry would have been a known crossing point to gain access to the Ouachita wilderness. Burris captured the moonshiners and brought them back to the Duckett homestead to find his driver had abandoned him. Burris hired a wagon to take the moonshiners back to Texarkana to book them into jail.

Next time you cross a bridge on an Arkansas road or highway, consider what it might have been like for your ancestors who crossed those waterways by ferry, and what stories they could tell.

A swinging bridge offers an alternative crossing over the Mulberry River, where a ferry might once have been used.
3 Comments