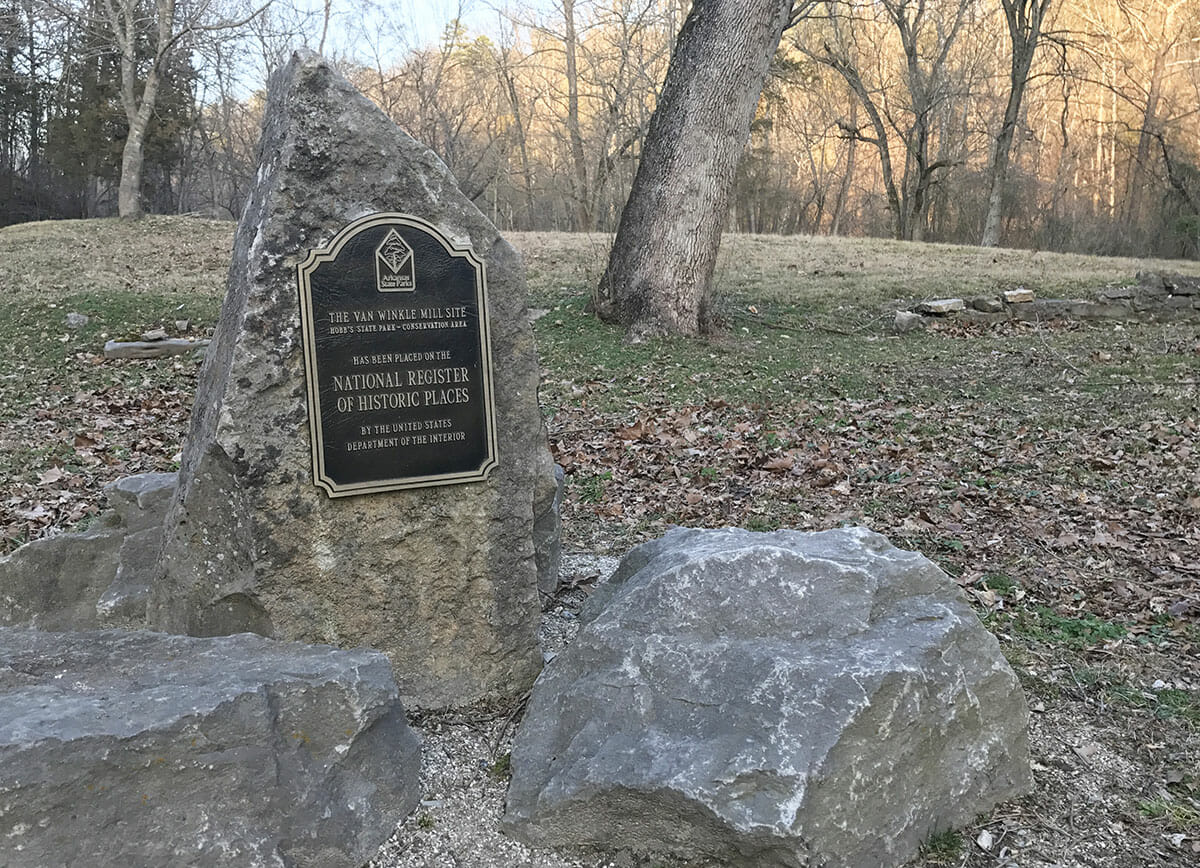 History fascinates me, and I think it’s safe to say it fascinates my family, too. We’ve driven past the Van Winkle Trailhead on Highway 12 many times. I had no idea the history we were passing. Little did I know the trail meanders down to the site of a community that once thrived.

We finally decided to go explore the trail one day. We took off down a paved concrete trail that curved through a tunnel underneath the road above. As we came out of the tunnel, we entered Van Winkle Hollow, a rather peaceful and very beautiful hidden gem. Eventually, the paved trail led to a stone pathway and road.

Peter Van Winkle lived here with his family; the family also owned slaves who eventually became freedmen. He and his family lived in a rather large and beautiful home with 11 rooms.

There was a spring house, lumber mill, blacksmith shop, garden and more. Van Winkle Road actually connected to the Elkhorn Tavern, which is located in what is now Pea Ridge National Military Park.

During the Civil War, the Confederates used Van Winkle’s home and mill for their own purposes. Van Winkle’s family fled to Texas, and their mill was burned in 1863. They returned and rebuilt the mill after the Civil War ended. Their mill ended up providing lumber for much of the restoration of Northwest Arkansas after the war.

As we meandered around the trail loop, we stopped in front of the old house site, where part of the rock wall around the yard remains to this day. I could only imagine that big white house standing in such a peaceful place. Across from the house and up a small incline sits the site of their Garden Terrace. The garden was built on an incline so that anyone sitting on the second-floor porch of the house could enjoy the beauty of the garden.

A sign mentioned that as the house and the garden were on separate sides of the road, those traveling the road were reminded of the Van Winkle’s status.

Not far from the house, we crossed a little stream to have a look at what’s left of the old spring house.

Walking under cover of trees, we came to the old mill site. This was the site of a 60-horsepower, steam-driven mill, the first of its kind in Northwest Arkansas. When it was rebuilt after the war, it was powered by 150-horsepower driven by three steam boilers that ran the sawmill, the gristmill, and a wood products manufacturing operation.

Of course, you’ll also find the site of Vernon West’s Mill (a later owner of the Van Winkle home).

We spent a little time exploring the creek that runs through the site of the old mill.

Rock bluffs jut out over the creek. Looking up, I could imagine eagles resting on the tops of pine trees with the creek rippling by below. It really is such a beautiful place to meander and explore.

We found a trail that led to the site of the old Mule Paddock, and we decided to keep walking until we were almost to Beaver Lake.

Once we reached the road, we eventually passed the site of the blacksmith shop.

All around Van Winkle Hollow are trees, grassy areas and benches. The benches are placed so visitors can rest and enjoy the peacefulness of this hollow. As we explored, I told my family I understood why Van Winkle settled in this spot. It’s so peaceful, resources are abundant, and back then it must have been a quiet spot, save any passersby on the road.

As we were on our way out, we stopped by a site where they’ve found artifacts, including pieces of an old alphabet plate, a toy gun, a marble, rings and pieces of pottery.  A sadness kind of welled up in me at the thought that these little pieces represented a life that once lived here but is now gone. We continued reading and found this site is believed to be the living quarters of Aaron Anderson (“Rock”) Van Winkle, a trusted slave who eventually became a freedman and mill foreman. Eventually, in the 1880s, Aaron bought his own farm west of Bentonville. He was a well-respected member of the community, and when he died in 1904, he was greatly mourned. From everything we learned on our walk of the Van Winkle Trail, I think I would have liked to meet Aaron and his family.

Finally, we wound our way back up the trail, through the tunnel and back to our car. The Van Winkle Trail had so much history… I could never have imagined that all of that existed just a short walk beyond the road.

Details to Know Before You Go

Part of the trail is paved, while part is a stone path/road. The trail is wheelchair friendly. There’s a restroom at the entrance to the trail in the parking lot; it is a composting toilet. The trail is an easy hike or walk with only a small incline heading back to the parking lot. There are benches to sit and rest. I wouldn’t hesitate to pack a picnic lunch the next time we go. Also, dogs are welcome as long as they’re on a leash.

You can learn more about the history of this place at the Hobbs State Park Visitor’s Center.