Photo of The Week | Sharing the Sweetness

The Haunted Cathedral – More Than A Halloween Attraction 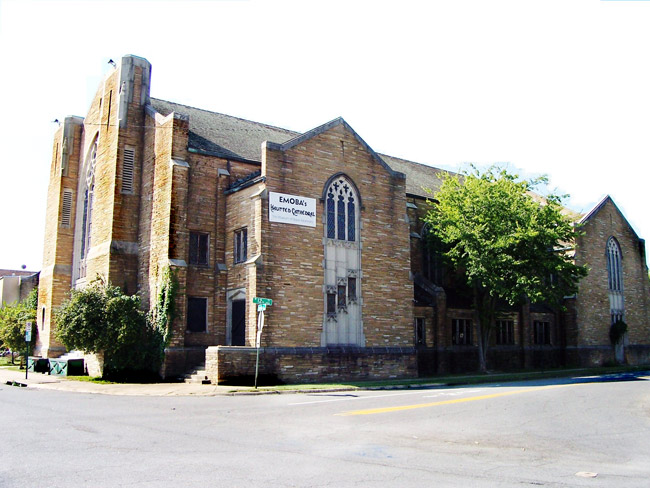 It’s October, and for many Arkansans that means it’s time to break out the costumes and candy and engage in some creepy after-dark festivities. The Haunted Cathedral, well known among central Arkansas residents, attracts hundreds of thrill-seeking visitors in the weeks leading up to Halloween. A chilling combination of ghouls, zombies and monsters, The Haunted Cathedral sends shivers down the spine of the most daring All Hallows’ Eve enthusiast. The annual attraction, open October 14-31, is the major fundraiser for Ernie’s Museum of Black Arkansans and Performing Arts Center more commonly known as EMOBA.

In 1993, Ernie Dodson purchased the historic First Baptist Church with plans to renovate the building and the surrounding land to establish EMOBA as the first museum in Arkansas dedicated specifically to sharing the history of African-American Arkansans. Built in 1941, the church is listed on the National Register of Historic Places and is recognized for the extraordinary craftsmanship of its stained glass. The Arkansas Historic Preservation Program requested the church’s inclusion on the national registry because it is “the best extant example of a Collegiate Gothic design in its particular neighborhood, and one of the best examples of stained glass craftsmanship in the entire city. It is also significant as the last known example of this declining style in any of Little Rock’s historic neighborhoods.”

Dodson’s decision to convert the historic church into a museum was fueled after learning that her mother was terminally ill.

“Whatever contribution she made was going to be buried with her unless someone wrote it down and preserved it,” said Dodson.

She enlisted the help of her family to convert the neglected, battered church into a museum; however, she soon discovered the true potential of her building was hidden just below the surface. Dodson said that her brother, who “wasn’t afraid of anything,” was terrified of going into the basement because of the possibility of bats.

“I wasn’t going in there either,” said Dodson. “We don’t know to this day if there are bats in the basement!”

The mystery surrounding the bats or lack thereof was enough inspiration for Dodson to create a signature attraction that has sustained EMOBA financially for 23 years. According to Dodson, The Haunted Cathedral is the first and longest running Halloween attraction operated by African Americans in Arkansas.

The eerie trek through the Gothic structure is complete with dark mazes where visitors encounter ghastly scenes, grisly animatronics and gruesome characters. With a colorful group of actors portraying a range of characters from the unassuming greeter to “Egor,” the sleeping giant, The Haunted Cathedral keeps visitors enthralled from start to finish. Even when it seems like the thrill is coming to an end, there’s a surprising finale to top off an evening of hair-raising fun.

Although The Haunted Cathedral is EMOBA’s main draw, the museum also offers a summer youth program, Teens in Action, and hosts the annual JamFest Heritage Day Festival. The museum’s changing exhibit, “Who’s Who in Arkansas Black History,” highlights African Americans who have made significant contributions to both Arkansas and the country as a whole, including former Harlem Globetrotter Hubert “Geese” Ausbie; Eliza Jane Ashley, author of “Thirty Years at the Mansion”; and Dr. Oba B. White, the first African American elected to the Arkansas Academy of Family Physicians.

One response to “The Haunted Cathedral – More Than A Halloween Attraction”