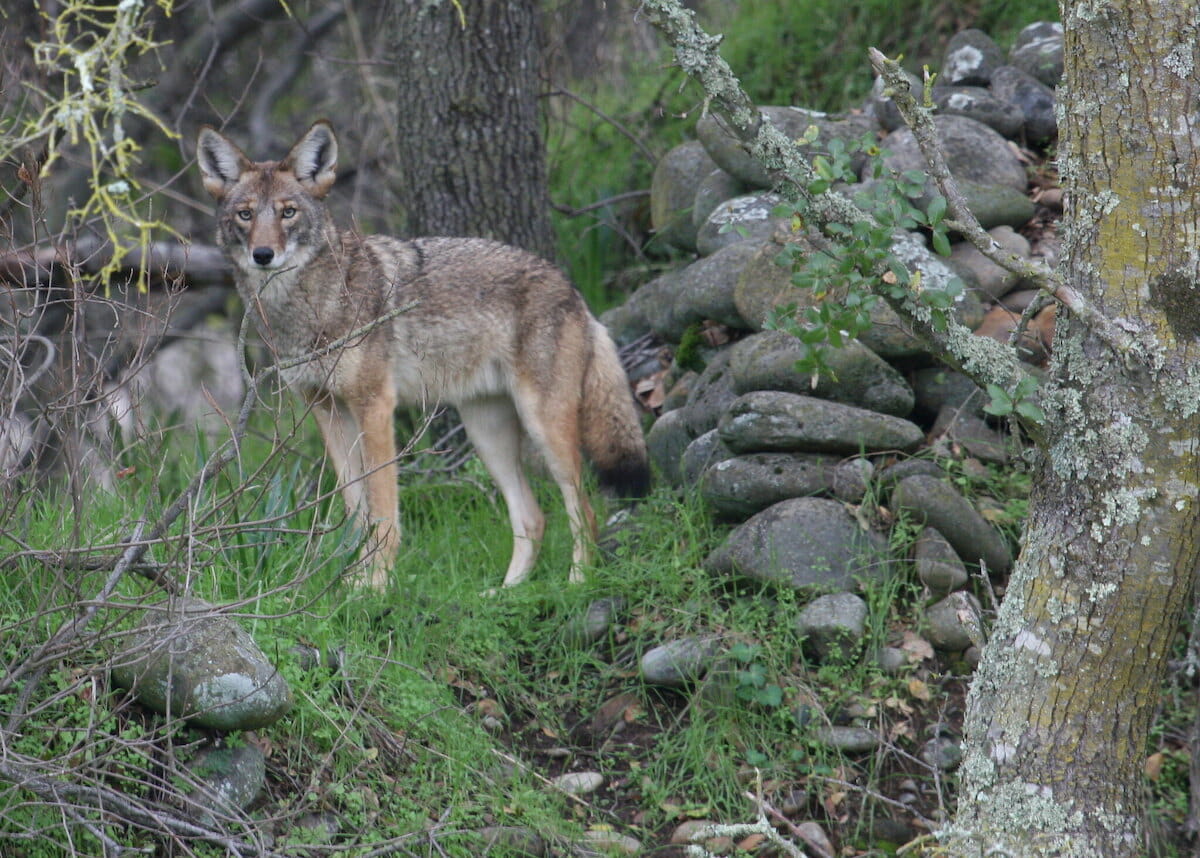 Coyotes are one of the most elusive wild animals, perhaps only outmatched by legends of various monsters in Arkansas. In true clever movement characteristic of these creatures, a coyote once sneaked into our yard and stole a chicken a mere 15 feet from me. I never saw a thing; its footsteps light and its small body giving it stealth and grace.

Although distant relatives to wolves, coyotes are much smaller. About the size of a medium dog, they typically weigh between 15 and 40 pounds. Their fur color varies depending on their habitat but in Arkansas, they tend to be colored in cinnamon and gray. Sometimes called “song dogs,” coyotes are known for their yipping and yelping and can often be heard “talking” well into the night.

Coyotes in Arkansas are found in every county, and their population is rising. They prefer to live near the edge of forests along open farmland and pastures, but they will reside just about anywhere, including in towns and cities. You likely live far closer to a coyote than you probably imagine.

Across North America, coyotes have long been in direct competition with wolves for their food. Wolves were even predatory towards coyotes. As wolf populations dwindled, coyote populations flourished, and they moved into new areas. Before 1950, coyotes were mostly found in western Arkansas. By the 1960s, their range had extended statewide as timberland was cleared and more land was turned to pasture.

In Arkansas, the coyote breeding season is typically February and March. The gestation period is about 60 days, so across the state, female coyotes are welcoming litters of four to five pups and are just beginning to wean them. The need to provide food for pups will often lead female coyotes to seek out easy meals, which means a rise in domestic incidents in the spring: backyard chickens and small pets make for tasty fare.

Keeping the Coyotes Away

A coyote’s natural diet is about 90% meat, although they also eat berries, fruits and some vegetables. Coyotes generally scavenge or prey on smaller animals like snakes, birds and frogs. Occasionally, a pack may go after a small elk or a deer. As opportunistic feeders, coyotes will typically choose the easiest meal and humans often make their yards very enticing. Many people fear that coyotes will eat pets and livestock and they might if the opportunity presents itself, but they are much more likely to stick to a natural diet.

The best way to keep coyotes at bay is to remove things that could serve as a food source, including whatever is set out in a pet dish for dogs and cats. If you spot a coyote, wildlife officers suggest making yourself appear larger by raising your arms and making a lot of noise. This will usually be enough to scare away the creature, but they may continue to return if a food source remains.

Historically, coyotes and many of Arkansas’s other furbearers were valuable for their pelts. Arkansas was once a prime location for trapping and fur hunting. As the desire for furs began to wane, coyote populations flourished.

In 2019, the Arkansas Game and Fish Commission expanded coyote hunting season year-round. Although furs no longer hold much value, hunters had other reasons to go after these wild animals. Coyotes often feed on quail and turkey, and hunters were seeing decreased numbers of birds during those seasons. Predator hunting may help protect bird populations and is also increasingly valued as a sport. Hunting for coyote can be a challenge because they are so hard to catch and the techniques hunters use for other animals don’t often work with coyotes.

Visit Arkansas Game and Fish to learn more about coyote hunting and trapping regulations or to apply for a predator control permit.

One response to “Arkansas Coyotes”