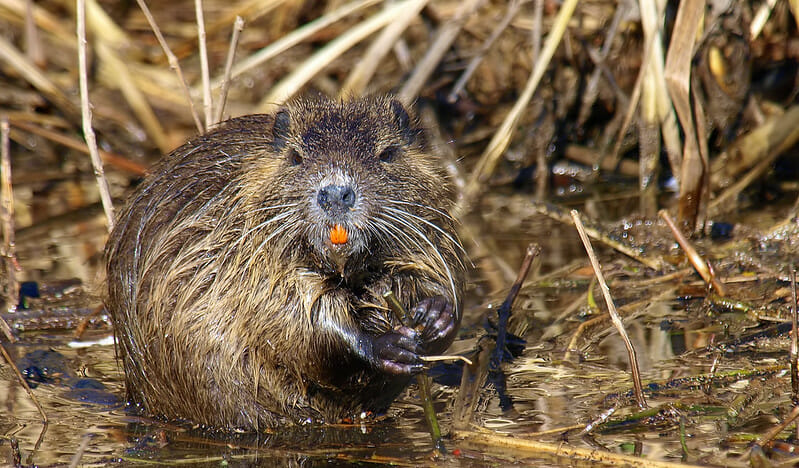 The word “rodent” alone is enough to give some people the heebie-jeebies. Most of us are aware that mice and rats are rodents, but the classification also belongs to beavers, nutria, muskrats and groundhogs. Rats and mice are distinctive. Can you tell the difference between the others? Keep reading, and we’ll help you to identify the larger Arkansas furbearing rodents you may see in fields and ditches or along the edge of the water as you enjoy The Natural State.

My family and I live close to the river bottoms along the White River. Following an unusually wet spring season, one where we’d seen animals pushed out of their typical environment and up into our backyard, I took a walk through the woods full of many flooded areas with water higher than I’d ever seen. Suddenly, I heard a slapping sound as loud as a gunshot. It sent ripples through the water and fear through me. I wasn’t sure whether to run, hide or proceed with caution. I wasn’t alone in the woods.

Rodents make up more than 40% of mammal species worldwide, and Arkansas is home to several interesting ones, including aquatic and semi-aquatic furbearing rodents. Furbearing rodents are generally more well-received than rodents like mice and rats. All rodents are known for having incisors (front teeth) that are continually growing. Furbearing rodents also have furry pelts that carry some commercial value. In other words, they are hunted, and their hides can be preserved and possibly sold.

Was the noise I heard made by a furbearing rodent?

I decided to take my chances but proceeded with caution as I moved closer to the water, where I spotted several beavers. The source of the sound was the beaver’s powerful tail as it slapped on the water to warn me that I was invading its space. The beaver’s tail also works as a boat rudder to help him steer through the water and as a kickstand to provide support while he works to chew down a tree.

Beavers are primarily nocturnal rodents who spend much of their time building dams. They can weigh up to 60 pounds, and come with powerful front teeth used for chopping down trees, the tell-tale sign that a beaver is in the area. They use the trees to build dams that allow deep ponds to form, becoming the place where they build their lodges. Although beavers can cause problems for farmers and landowners, they are an essential part of our ecosystem as their activities create watering holes for wildlife such as deer, and habitats for fish and other species like muskrats and nutria.

In the early 1900s, when hunting was unregulated and prices for beaver pelts were high, beavers were almost entirely hunted out of Arkansas. Once pelt prices dropped, the beavers returned to The Natural State and populations have once again increased. Proper population management is essential because while they do increase wetland habitats, they can flood valuable timberland and farmland.

Nutria are not native to Arkansas but made their way here in the early 1960s. They were first introduced into Louisiana from South America in the 1930s for their furs and to help control invasive aquatic plants. It quickly became apparent that this was the wrong move.

Nutria are prolific reproducers, eating up to 20% of their body weight in vegetation each day. They will eat away the natural food source for other native aquatic and semi-aquatic rodents. Additionally, the damage to marshes and swampland caused by reduced vegetation has caused issues with erosion and flooding.

Nutria are sometimes mistaken for beaver or muskrat but do have two distinctive features if you look closely. A nutria’s tail is round and rat-like and sparsely covered with coarse hairs, and its large incisors are bright orange.

There is one benefit to nutria: they are said to be the tastiest of Arkansas’s furbearing rodents.

Groundhogs and woodchucks are one and the same and are even sometimes referred to as whistle pigs. Slightly smaller than a nutria, groundhogs, as their name implies, spend most of their time on the ground. They are capable of climbing trees and swimming and will do both to access food, which includes grass, tree bark, fruits and some aquatic vegetation.

One of Arkansas’s true hibernators, groundhogs, are closely related to squirrels. They typically hibernate from late fall through early spring. Spotting groundhogs in the spring is a good indicator that winter is finally over.

Muskrats look more like rats than any of our other rodents. Smaller than the other similar creatures, muskrats have a long scaly tail that’s slightly flattened on the sides to help them swim, which is beneficial because muskrats love the water.

Muskrats like to burrow underwater entrances to their dens and often cause a lot of damage to ponds and levees. But they are essential to the ecosystem since they serve as a food source for bear, eagles, hawks, otters and snapping turtles.

Beaver – Large in size with a large flat tail

Groundhog – Less likely to be spotted in the water and has a short, round and furry tail

Muskrat – Smallest in size with a long, scaly tail

Are you interested in learning more about Arkansas Furbearers?

Check out our articles about Bobcats, river otters and opossums.