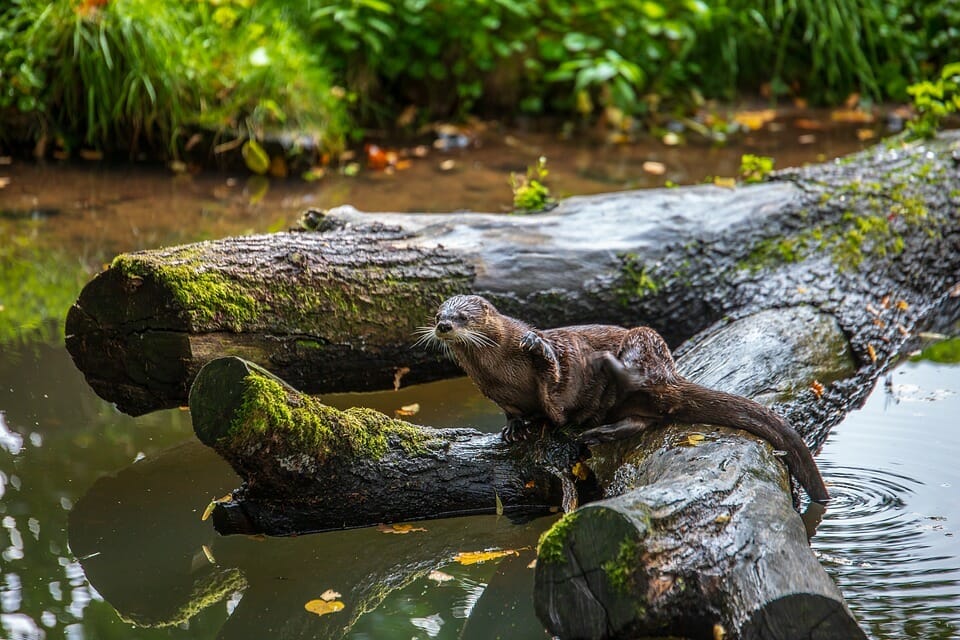 Arkansas is rich in wildlife, boasting over 70 animal species living from the Ozark and Boston Mountains to the River Valley and Ouachita Mountain region. Among the state’s waterways, the cute and playful river otter is a fun one to watch. These long-whiskered creatures skitter along the water, catch fish and hang with their friends in a makeshift raft by forming together in groups. You can find the North American river otter taking up residence in every county across Arkansas, making these fur-bearing animals quite prevalent in The Natural State.

Where in Arkansas do Otters Live?

Arkansas River Otters don’t limit their dwellings to rivers. These animals are happy to live in several types of aquatic habitats like lakes, streams and even drainage areas that stay full of water. It is not uncommon for early morning paddlers on Greers Ferry Lake to spy a few otters playing about before the sun comes up.

Otters live in dens along the shorelines and are not too bashful to take over burrows that were built by groundhogs, beavers or muskrats. Otters will also use hollowed-out or natural hollows found along river banks and lakeshores and seem to prefer densely-wooded areas.

Otters have a long body covered in soft brown fur. Their long tail and short, powerful legs and webbed feet make them excellent swimmers. Their dense fur helps them to adapt to cold water even when temperatures drop below freezing.

Despite their cuddly appearance, otters are wild animals with very sharp teeth. It is unlikely one would bite without being provoked, but as with any wild animal, it is best to keep your distance.

What Do Otters Eat?

You can expect Arkansas otters to dine on fish, turtles and crayfish at some of the state’s best fishing spots: Little Red River, Bull Shoals Lake and fishing holes in the northwest region. Before much of Arkansas’s mussel population was depleted during the pearl rush, they were also a favorite meal.

Otters tend to hunt for the easiest meal and prefer whatever fish or other aquatic creature is plentiful. If you are a fisher, be aware that otters have been known to get into live wells and eat an entire day’s catch in one fell swoop!

Can You Hunt Otters?

Since the 1700s, otters have been widely hunted, primarily for their pelts.

These fur-bearing animals drew many early settlers and explorers like Henry Rowe Schoolcraft to Arkansas in the 1800s and many of the animals were wiped out due to poaching and overhunting. Unregulated trapping led to the decline of otters until regulations were enacted to limit over-exploitation. In 1915, the General Assembly established “A State Game and Fish Commission To Protect the Game and Fish and Fur-Bearing Animals of This State And To Regulate The Killing and Taking of Game.”

In 1977, when otter pelts were in such high demand that the population could not be sustained, regulations enabled consistent monitoring to maintain healthy populations. Commercial demand for pelts has dwindled in recent years and fur-trapping is not as popular as it once was. That’s good news for otters. With modern-day hunting regulations, otter populations have made a comeback, although they are not quite as widespread as they once were.

Those regulations allow for hunting and trapping of many furbearers, including river otters. River otter season typically runs from early November through late February. More information about can be found on the Arkansas Game and Fish Commission website or by attending a trapping workshop at one of their nature or education centers.

Where Can I See An Arkansas River Otter?

You might be able to spot wild otters along the wooded banks of most rivers and lakes across Arkansas. They can be nocturnal or diurnal, but they seem to be most active at night. Your best chance for spotting one will be from a canoe or kayak at dawn or dusk. Because they shy away from humans, you will likely need a good set of binoculars to view them from a distance.

If you would like an alternative to an early morning paddle across one of Arkansas’s many beautiful lakes or rivers, you’re in luck. The Little Rock Zoo is home to three river otters you can visit any time the zoo is open.

3 responses to “River Otters in Arkansas”