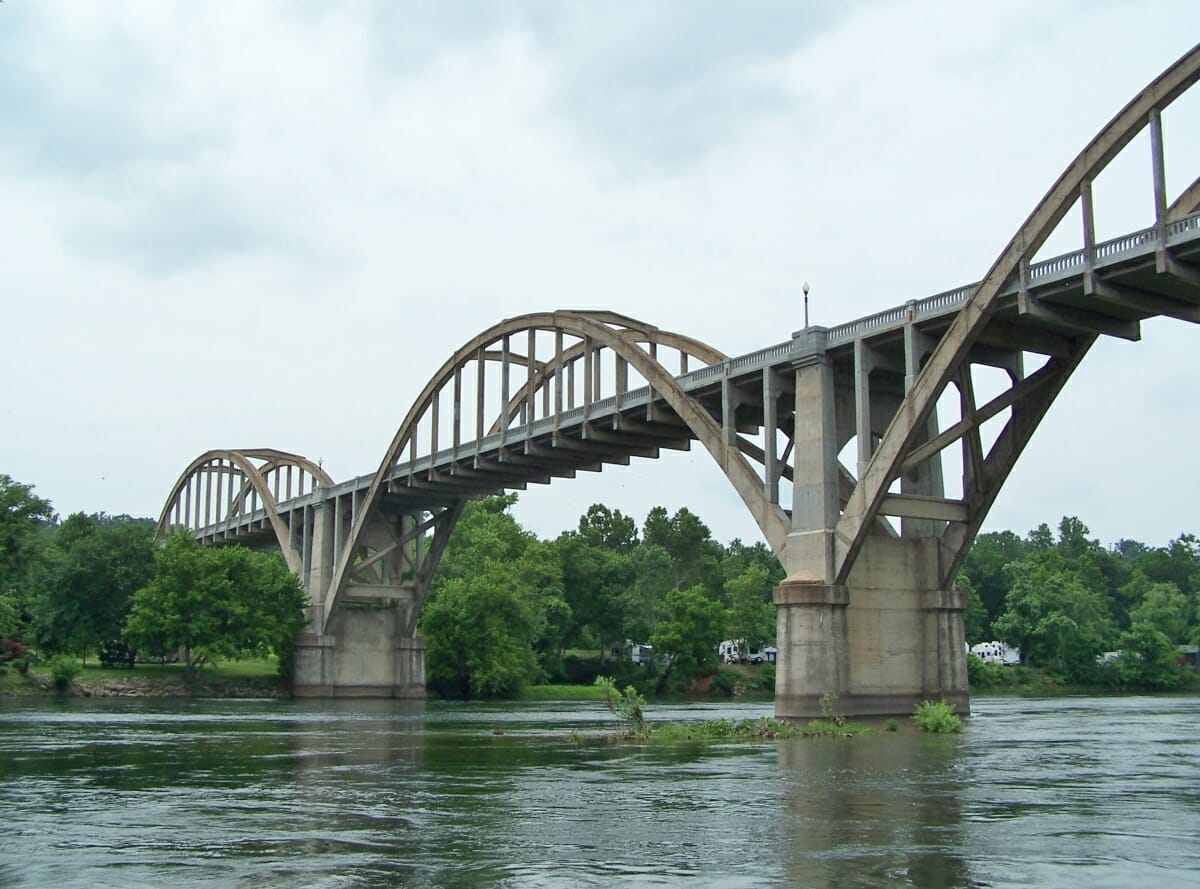 Cotter, Arkansas, sprang up as a railroad boomtown in 1902 when the White River Railway purchased 40 acres for railroad use. By 1905, Cotter was home to the division headquarters for the railroad and a post office, drugstores, a lumber factory, and even a button factory that made buttons from mussels gathered in the nearby White River.

The White River flooded often and was difficult to cross. Denton Ferry was located a few miles away, but Cotter needed a more reliable means to cross the river. In 1930, the Cotter Bridge was built.  The bridge connected Baxter and Marion counties, and in its nearly 100 years of history, has been a bridge to the past and the future of Cotter.

Like most railroad towns, Cotter thrived while the railroad supplied it with a steady stream of people, products and business. It reached its peak population of 1,089 in 1950, but railroad traffic began to decline. The last passenger train left Cotter in 1960. The city needed to find another means to sustain itself or become a ghost town.

Fortunately, the White River and the addition of Bulls Shoal Lake and Dam provided plenty of opportunities. The area began to draw retirees in the 1970s, which was able to sustain the population. Cotter Bridge also continued to be in use. It was renamed the R.M. Ruthven Bridge after the Baxter County judge who was instrumental in getting approval for the bridge to be built. In 1986, it was designated a National Historic Civil Engineering Landmark. In 1990, it gained entry on the National Register of Historic Places.

Sometime in between, the rainbow arch bridge was lined with Christmas lights which illuminated its arches every night. Jason Nazarenko grew up in Cotter and remembers seeing the lights while driving around town as a high schooler in the early 1990s. When he graduated in 1994, he joined the army and left Cotter, as many others had. He didn’t think about the bridge again until he returned home to Cotter in 2018 with his family. Nazarenko had recently wrapped up a 23-year career as a Blackhawk helicopter pilot for a special operations unit. Now he wondered how he could use his skills and experience to reinvigorate his hometown.

Nazarenko got in touch with Cotter Mayor Mac Caradine, who quickly asked if Nazarenko would be willing to take on the Cotter-Gassville Chamber of Commerce presidency. Nazarenko agreed and began to build a team of volunteers excited to rebuild the area. He also ran across paperwork to relight Cotter Bridge. The lights came down in 2004 when the bridge was renovated. After the renovation, the city discovered the lights shouldn’t have been on the bridge as they weren’t approved by the Department of Transportation or the Arkansas Historic Preservation Program. The city applied to light the bridge, but the paperwork stalled until Nazarenko found it. He was able to meet with both groups to work out the issues holding up the lights.

Cotter received their permit to light the bridge in June 2021, but they only had one year to raise the revenue and install the lights before the permit expired. What’s more, an estimated $200,000 had to be raised to pay for the installation. Nazarenko wasn’t daunted. Only a month later, the Cotter – Gassville Chamber of Commerce hosted a fundraising event to relight Cotter Bridge. In one evening, they raised all of the money needed with generous donations from the community, including longtime Cotter residents Peter and Jan Peitz. The lights will be named “The Peitz River Lights” to honor their donation and long commitment to the community. “Our community of Cotter is coming to life, once again,” Peter Peitz says.

Cotter is indeed experiencing a rebirth. Though it has been known as a center for trout fishing and touted as Trout Capital, USA, Nazarenko hopes to expand on that reputation by continuing the renovation efforts in town. He has already completed the renovation of the original Cotter Saloon and salon, owned by Seth Potter and built in 1921. Nazarenko purchased the building and restored it into several AirBNB apartments called Potter Block. He has also restored the Presbyterian Church, built in 1914, and has plans for it also to become an Airbnb and event location. The Chamber has successfully hosted a series of outdoor movies in 2020 and 2021 that allows the community to come together, even in a pandemic, and enjoy a film outside. Nazarenko actually projects the movies onto the flat part of Cotter Bridge.

On December 1st, the city plans to hold a celebration and turn on the Cotter Bridge lights for the first time in many years. The lights on Cotter Bridge will sweep up to illuminate the historic rainbow arches. There are plans to allow people and businesses to rent the Peitz River Lights to honor birthdays, anniversaries, and other milestones. The revenue earned will continue to allow the lights to operate.

When the lights illuminate Cotter Bridge and the White River, it will be a bright symbol of the town’s renewal. Nazarenko promises more plans are in the works. “I always say passion plus action equals results. These are stepping stones to help bring back Cotter. We are on the cusp of a Cotter rebirth; it is our time to get involved with our community.”

With the Peitz River Lights shining from Cotter Bridge, it will be easy to see the transformation.

Find out more about Cotter and the surrounding area at Cotter & Gassville Chamber of Commerce and CityofCotter.org.