NY Post Photos Added to Special Collections at U of A 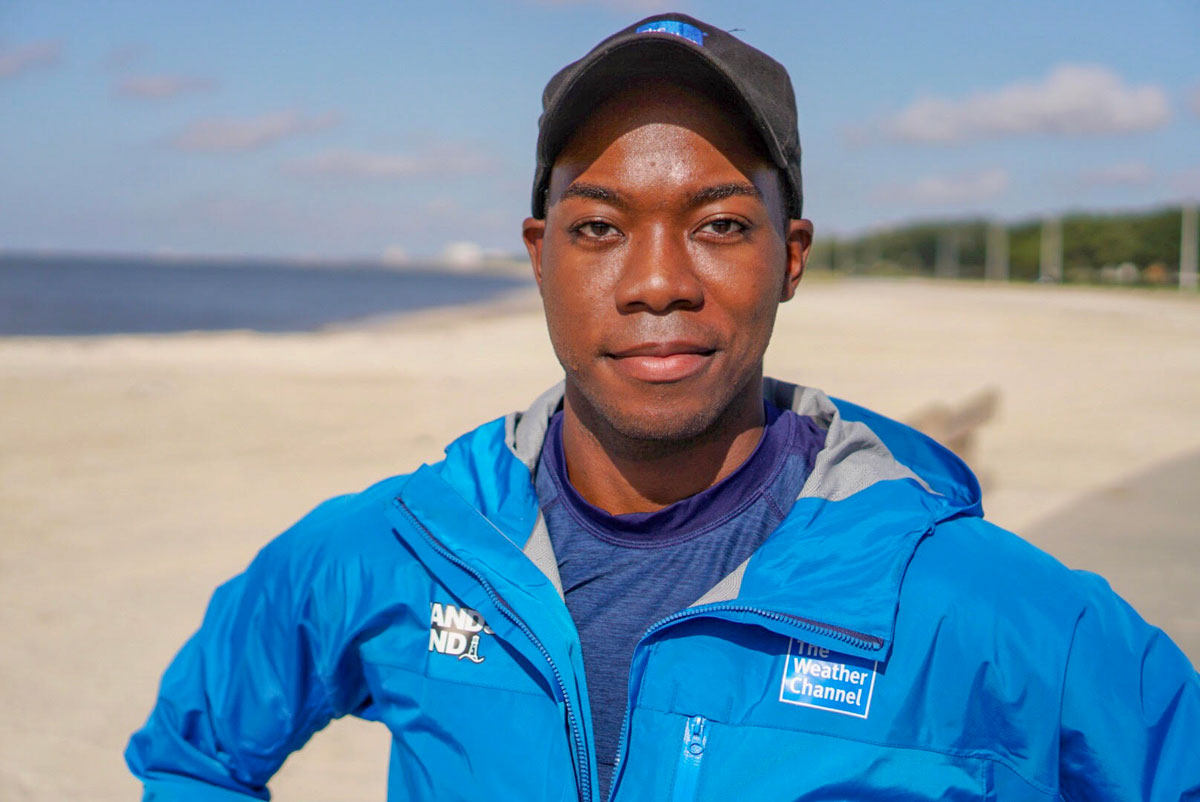 Arkansans who watched the coverage of Hurricane Dorian on The Weather Channel in recent weeks might have noticed a familiar face covering the storm.

Camden native and University of Arkansas graduate Tevin Wooten has been working as on-camera talent for the network for a little over a year now, tracking hurricanes and providing on-the-ground reports for national audiences.

Wooten graduated from the University of Arkansas’s School of Journalism in 2014, and during his time in Fayetteville, he worked as an assignment reporter and fill-in weather reporter and producer at KNWA/Fox24. After graduation from the UA, Wooten earned a second bachelor’s degree in Meteorology from Florida State University.

He has been with The Weather Channel since the spring of 2018, where he has been working covering major storms on-location for the network.

We got in touch with him to learn more about his new career with The Weather Channel, and he was nice enough to answer some questions for us.

Tell us a bit about your career so far since you graduated from the UA.
Since graduating from the University of Arkansas in 2014, I’ve been operating at full speed. I’ve worked as a reporter and fill-in weather anchor at KNWA, won an EMMY, earned a Meteorology degree & Mathematics minor from Florida State University and have almost completed a year and a half with The Weather Channel television network.

What was the process of interviewing and being hired on with The Weather Channel like for you?
Interviewing with The Weather Channel is much like you’d expect for an ordinary job. You are scouted out by recruiters and you formally apply. If your resume packet and submission materials look good, then you go in for an interview. I remember the night before going into the network, I gave myself a weather briefing. I wanted to know the nation’s weather backward and forward. I also paid attention to the network’s broadcast to know what weather stories were important to the team. I wanted to be fully equipped. The experience was a bit unique for me because I interned with the company a year prior. I knew most of the staff, and the company’s primary mission. As much as that gave me a leg up, I also felt a certain amount of pressure to interview even better.

Like going in for an interview anywhere, there’s a test to see how you would respond to a ‘live’ or real-world scenario. In television, the on-the-spot performance is usually an aircheck. It’s as close to a live environment as possible. We went through different forecasts for different areas of the country, in nearly every spot in the studio…full lights, makeup, music, bump-ins and all.
While I’m sure that part was not perfect, there are certain aspects of the performance that are teachable. What’s not teachable is the personality that comes out on-air and in general conversation. It’s a trait that I am still working on with myself, but I believe I had just the right amount in conversation and side meetings with network executives that stood out.

A few months after our in-person interview, I received a call with an offer to join the network. And the day I graduated from Florida State, I packed my bags and moved to Atlanta to start working at The Weather Channel.

You’ve seen some pretty incredible things already since you’ve been with TWC. Tell us a bit about some of the storms you’ve covered, and what it’s been like to cover them.
I joined The Weather Channel as we were nearing hurricane season in 2018. I was quickly immersed in the active environment. If you watch the network, you know how intense it can get. And most recently, I anchored coverage of Hurricane Dorian for the network from Florida & Virginia.

One notable storm was Hurricane Florence in 2018 in North Carolina. Several cities and communities were essentially cut off from other areas because so much water covered roadways and the interstate. I will always remember that storm, particularly, because that was my first true experience field anchoring storm coverage with the network.

As the rookie to the network, and for anyone new to the national spotlight, I think there’s always that eagerness to go to the heart of the storm. That initially didn’t happen for me, and looking back, I’m glad it didn’t. Because the interstate was flooded, and flights in were almost impossible, most of our crews could not make it in to cover the aftermath. All but one, me. That re-taught me an important lesson in life. Patience is a virtue. I’ve heard that time and time again, but here it really hit hard. Your time will come. And when it does, give it everything you’ve got and shine.

When I’m watching you (or anyone covering a dangerous storm live), I always wonder how dangerous the situation feels when you are there. Ever get scared or feel like your life is in danger when you’re covering a storm?
Never. I never feel unsafe.

While there is an element of uncertainty with weather, we strategically position ourselves with safety top of mind. As a meteorologist with a crew, once we understand the forecast, we location scout. This may take place hours before a storm’s arrival, or days. Even in tropical storms and hurricanes, we look for our locations based on their proximity to cover.

I can recall a time when we reported a high-risk tornado day in Oklahoma. The first thing myself and our crew did before even setting foot in the city was call to ask about public storm shelters, where they’re located in the city, and how quickly could we get there. That day we were literally feet away from our fallback shelter.

You graduated from the Journalism school at the UA. Who were some of the folks there that you would credit for helping you along the way?
Professors Larry Foley & Robyn Ledbetter — They’re a duo that’s transformed the School of Journalism & Strategic Media at the University of Arkansas into a top-tier journalism program.

I can recall a time when myself and a group of journalism students wanted to report live for UATV on an EF4 tornado that impacted Central Arkansas. It was a decent drive from Fayetteville. Robyn, of course wanted us to get permission from our other professors, but then told us to “go for it!” Not once did she say no. We ended up producing award-winning content and broadcasts that night and others. She taps into the desire of the students and pushes them (us) even further.

Professor Foley taught the importance of “take me there, make me care.” It’s something that I do daily with The Weather Channel. I have the pleasure of going into communities across the country and explaining the science behind weather. I get to take the viewer to places they’ve never heard of, show them the power of mother nature and how it oftentimes transforms the lives of everyday Americans. In most cases when the story is done right, the “make me care” happens on its own.

Dr. Barbra Lofton (Walton College of Business) — Dr. Lofton was one of my many moms away from home while I lived in Fayetteville. She takes nothing from no one and is quick to call you out. Just as she’s quick to do that, she’s even quicker when to comes to giving life advice, and navigating such a large university. With so many students, it’s very easy for a professor-student relationship to stay inside the classroom. But Lofton’s lessons go beyond the classroom. She’s always taken my best interest to heart, and it’s helped me get to where I am today.

Meteorologist Dan Skoff (KNWA/FOX24) — Dan saw a bright-eyed and eager-to-learn journalism student who always had a passion for science. As a meteorologist, we’re tasked with protecting the lives of people and their property. That means every viewer’s life. No matter how big a storm is or how small, it will always impact someone. Dan takes that to heart. In a day where it’s so easy to get a forecast online and call it done, his passion and enthusiasm for weather continue to bring viewers back. He has mentored me since my days as a college intern and molded me into a great blend of personality and meteorologist.