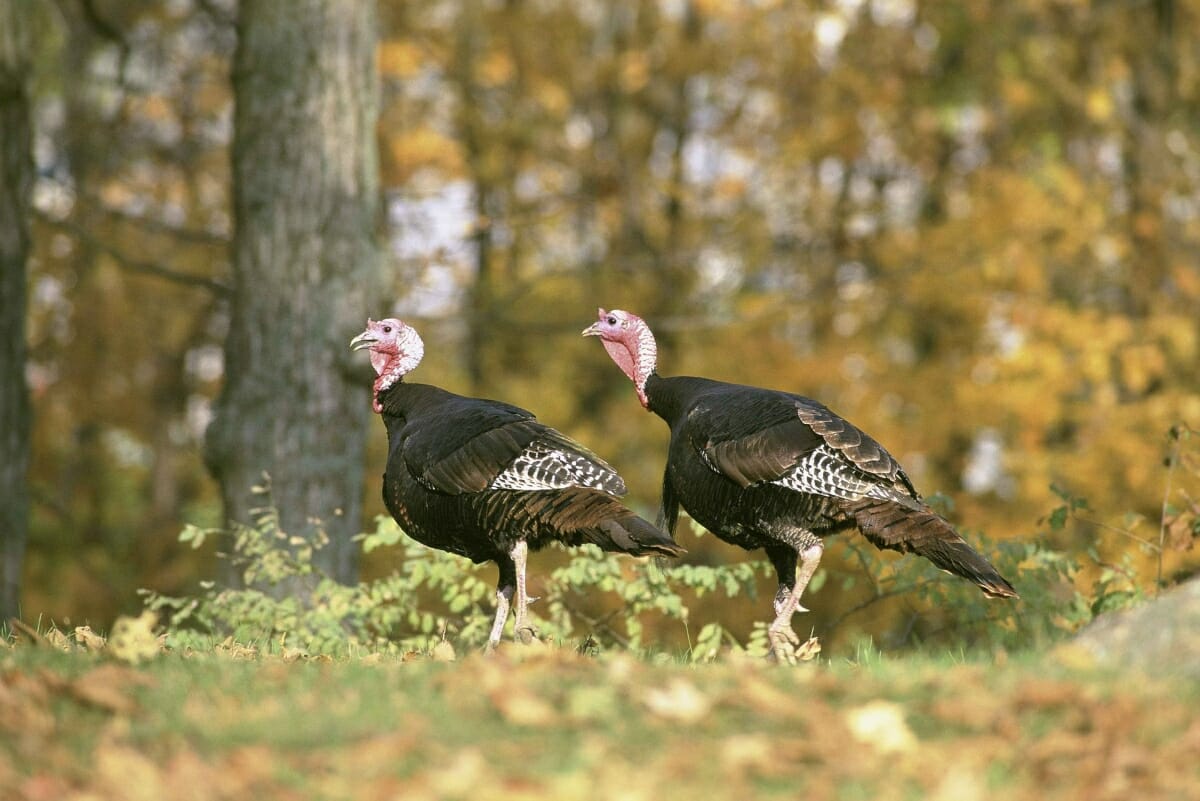 The bald eagle is the National Emblem of the United States of America, chosen for its regal appearance, but it has long been thought the wild turkey was once in consideration to be America’s symbol. Although the reality is the turkey wasn’t a contender for the role, Benjamin Franklin had nothing but respect for this native bird in a letter he wrote to his daughter about the appearance of the new symbol.

“I am on this account not displeased that the Figure is not known as a Bald Eagle but looks more like a Turkey. For the Truth the Turkey is in Comparison a much more respectable Bird, and withal a true original Native of America…”

Though the bald eagle remains America’s symbol, the turkey has a long history in the United States and in Arkansas, where, thanks to the efforts of a rigorous conservation program, the wild turkey can still be found today.

When the first European settlers reached the shores of America, the wild turkey was as common as the buffalo. There are six subspecies of wild turkeys in North America, including the Mexican wild turkey, the Rio Grande turkey and the Eastern turkey, which is native to Arkansas. Native Americans already raised and hunted turkeys when Europeans arrived. The famous first Thanksgiving story taught to every grade school child includes turkey as a main course. Though the pilgrims did sit down to a Thanksgiving meal with the Wampanoag Indians, it is unknown whether turkey was actually part of the meal. However, the Quapaw tribe in Arkansas were well accustomed to hunting the bird. When the first European settlers arrived in the area, they also heavily hunted the wild bird.

The Thanksgiving turkeys we know today look little like the wild turkeys found throughout the state. Wild turkeys are much sleeker with feathers ranging from copper, bronze and brown to even a few reds and greens among the males. They are good runners and can fly when startled, which happens easily. They also have great eyesight, making turkey hunting a challenging sport. It wasn’t always so difficult. Turkeys once numbered in the millions in the U.S. By some accounts, they were so unaccustomed to being hunted, they would allow hunters to approach without spooking. In the 19th century, their popularity grew beyond simply supplying the hunter’s table. The turkeys were hunted commercially, and their numbers dropped dramatically throughout this century.

Meanwhile, the turkey’s place at the Thanksgiving table began to grow. While oysters and fish were once sought-after Thanksgiving dishes, the turkey supplanted them after Governor William Bradford’s journals, once lost, resurfaced in 1856. The founder and governor of Plymouth Colony mentioned wild turkeys in his writings over the Thanksgiving feast. Sarah Josepha Hale, an editor at “Godey’s Lady’s Book,” published recipes for turkey, helping fuel the shift to turkey as the national dish. Though Thanksgiving was often celebrated each autumn, it didn’t have a permanent date as a national holiday. Hale was a fan of making the day a traditional holiday and petitioned several presidents to set an official date. President Abraham Lincoln finally did in 1863, giving us the holiday we now celebrate every fourth Thursday in November.

Things did not look good for the wild turkey, though. In the early 20th century, the bird had been hunted to extinction in many eastern states. In Arkansas, the numbers were grim. Irresponsible hunting combined with the decimation of wild turkey habitat by the timber and agricultural industries put the bird in danger of extinction. In 1927 the Arkansas legislature shortened the turkey hunting season and created refuges for the bird at the urging of the Arkansas Game and Fish Commission. However, this did little to stabilize the population. Turkeys grew scarcer as illegal hunting continued. By 1945, the Game and Fish Commission stopped all turkey hunting.

The Game and Fish Commission decided to take an active approach to repopulate wild turkeys in the state. In the 1950s, they began trapping the birds and relocating them to parts of the state where turkeys had either disappeared or were in severe decline. Each year through the next three decades, the commission continued to trap and relocate the birds. Limited hunting resumed in the late 1950s, but the relocation program was seeing success. By the mid-1980s, the wild turkey population was at 100,000.

The Arkansas Game and Fish Commission is well aware of the problem. In June 2020, the commission changed the turkey hunting zones from 18 different zones down to two. Zone 1, which includes Northwest Arkansas and much of Northeastern Arkansas, will have a nine-day hunting season. Zone 2, encompassing most of the rest of the state, will observe a 21-day season. The season will also open later than it has in the past, with April 19 slated for the first day in 2021.

Though the wild turkeys in Arkansas aren’t the birds likely to grace Thanksgiving tables across the state, stabilizing the native species is important. Turkeys have gobbled across the state since pre-Colombian times. Their loud, distinctive call to attract a mate, beautiful tail feathers and unique appearance all make the turkey special. To learn more about hunting wild turkey in Arkansas, visit the Arkansas Game and Fish Commission site. If you want to catch a glimpse of a wild turkey, try visiting one of the state’s wildlife refuges, where the bird is protected, along with many other animals. As you sit down to a Thanksgiving turkey this year, remember that the turkey, though not the national symbol of the U.S., is still an important American and Arkansas native.

One response to “Wild Turkey in Arkansas”