A Day in Mountain View 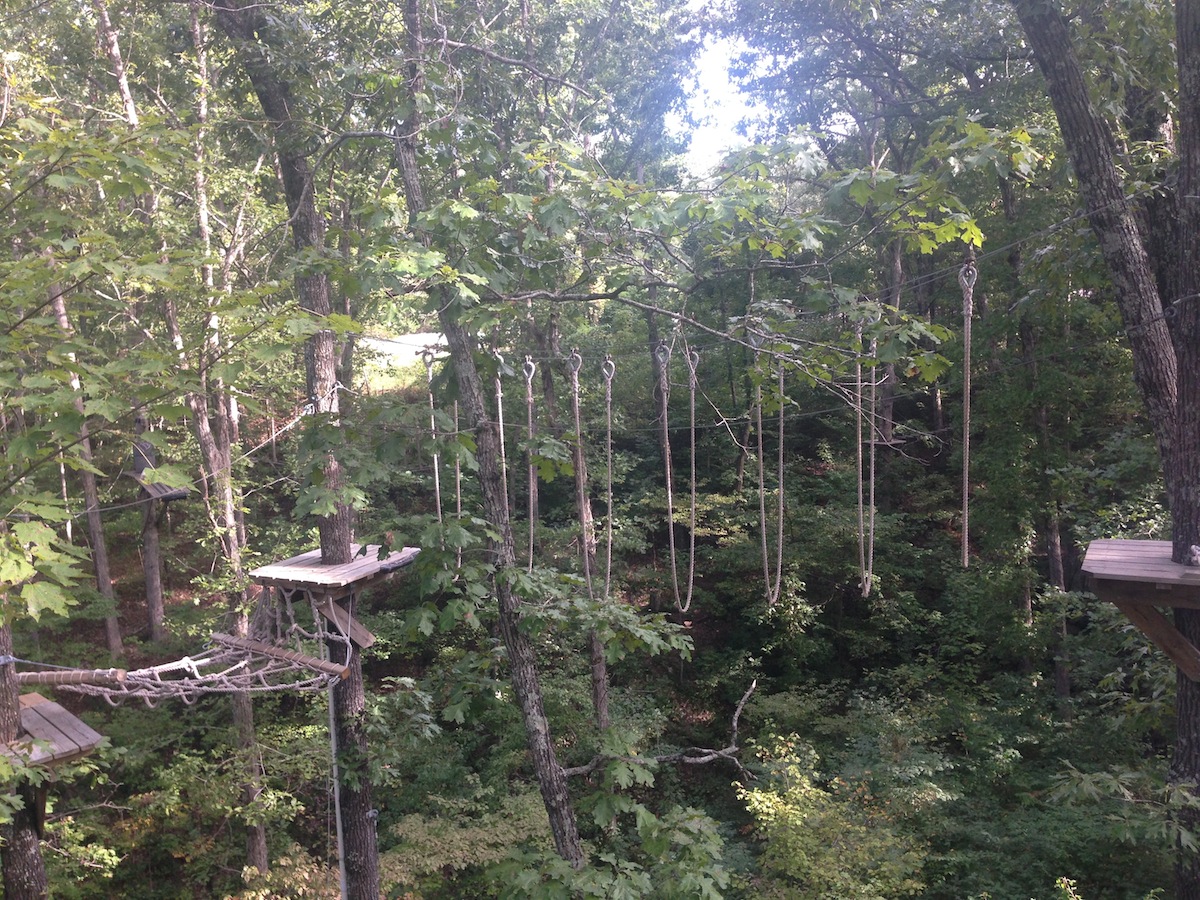 While attending the Fayetteville Roots Festival in August, my friend Megan and I enjoyed hearing The Steel Wheels, a folk group from the Blue Ridge Mountains. They were recently scheduled to perform at the Ozark Folk Center in Mountain View, a town renown as the Folk Music Capitol of the World. The morning of the concert, Megan discovered Loco Ropes. I had never been ziplining, but knew it involved an awkward harness belt so I wore an outfit that I thought would look the least unattractive with it.

It was a Thursday afternoon and we were the only visitors when we arrived. Bob Cox, one of the owners, gave us our options, recommending we start with one course to try it out, but we shrugged that we might as well do them all. As soon as we had paid for them, I was struck with a sudden fear that I wouldn’t be able to complete the courses. My apprehension increased after our guide helped me into the harness, trailing two heavy belts with attachments. As I braided my hair back, our guide said, “I have a hair tie if you need one.” The unexpected thoughtfulness of the young man put me at ease; I was less comfortable when he insisted on calling us both ‘ma’am,’ despite our begging him not to. “It’s just how I was raised,” he countered.

Climbing to a platform to begin our first course, I was terrified. I bravely decided to embrace my fate on the first obstacle, a log attached between platforms by cables, and I made a run for it. After trotting to the other side, my fears were immediately lifted, and I took a triumphant canopy selfie (I was able to keep my iPhone in my pocket the entire time). Megan and I completed all three lines in two hours without difficulty or injury, though I did experience a minor wedgie after misinterpreting an obstacle as a freefall activity: the rope seized up and yanked me to a sudden painful halt midair.

We changed clothes and ventured downtown in search of food. Portico Pizza Kitchen caught our attention because it advertised a coffee shop in addition to food. The name “Portico” is apt—in this community, people cherish their front porches, especially for picking tunes. The Stone County Ironworks Galleria connected to the restaurant, which featured the Galleria’s handsome fixtures and furniture. I was especially taken with a simple hanging iron fixture with nearly a dozen Edison bulbs in it. The wait for our food—pizza for me, potato soup in a bread bowl for Megan—was short, as there were only two other customers there at the time, and our meals were exactly what we needed after exhausting ourselves at Loco Ropes.

By the time we ordered lattes to go, other customers, including the members of The Steel Wheels, had presented themselves for dinner and we had a longer wait. We returned to the Ozark Folk Center just in time for the opening act, young locals Grace Stormont and Kai Perry. Mountain View’s Music Roots program affords children in the community the opportunity to study quintessential roots music and instruments; I imagine the talented duo are a product of that program. The Ozark Folk Center helps foster musical growth, but also brings successful artists who share the vision of roots culture—such as The Steel Wheels, who took the stage with tight vocal and four-piece string harmonies. The crowd was delighted, clapping and cheering throughout the show. An older man a few rows down from us kept calling, “yeah!” at particularly nice segments of picking or fiddling. A group of school-age children sat in the front few rows, sharing snacks and seeming to admire the talent on stage. Someone in the audience yelled, “turn it up!” Applause permeated the performance, and afterward The Steel Wheels received a standing ovation, finally concluding with their powerful a capella hymn, “Rain in the Valley,” a crowd-pleaser that stuck in my head as I drove home and contributed, I’m sure, to my driving too fast and being pulled over by an officer in Leslie (I did not protest being called “ma’am” then).

After the concert, a crowd waited to buy merchandise and thank the band. “Is this the one that has ‘Redwing’ on it?” a man asked, holding the album with the title Redwing across it. A calico cat outside solicited petting, and a complimentary shuttle driven by a patient and kind woman delivered people to their cars. Hopefully we will see The Steel Wheels back in Arkansas soon, and you can still get a dose of roots music any day in Mountain View, a town where musical heritage is honored, young men gallantly offer women hair ties and children are raised to say “ma’am.”