A Fresh Look from Pinnacle Mountain 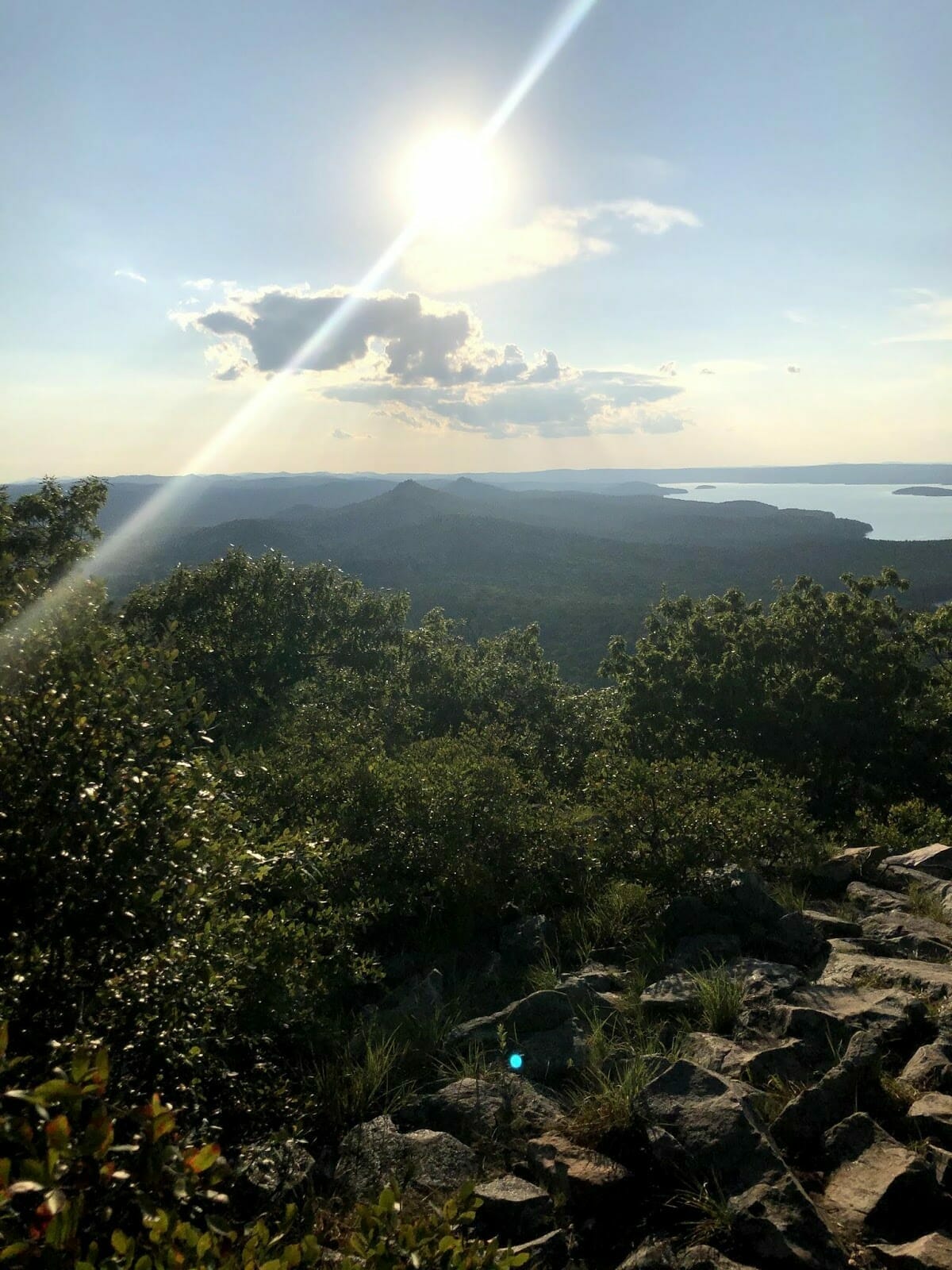 It’s hard to believe that I could live in central Arkansas for more than 18 years without having hiked Pinnacle Mountain, yet this was exactly the case as a transplant Houstonian living in Searcy. Due to its ecological features, Pinnacle Mountain, for me, had just been “the volcano” outside of Little Rock. I love seeing this iconic ecological landmark, but the thought never crossed my mind to climb it.

So, late last summer, my wife, two of our young adult children, and I drove from Searcy to Pinnacle Mountain State Park. We arrived just as the visitor center was closing, giving us enough time for any last-minute information about the hike. The park ranger informed us that there were two trails, the East Summit Trail and  West Summit Trail. A website and app give information about outdoor recreational activities.

To be sure, I asked the park ranger. He confirmed neither trail was easy but told us to take the west trail. That proved to be great advice!

Before we drove the two miles to the trailhead in Pinnacle Mountain State Park, we had a picnic supper by the picturesque pond next to the visitor center. Then we followed the stairs up to the lookout point. The combination of pavement and wood made that ascent quite easy. We enjoyed clear views of the Arkansas River, the valley below, and a herd of deer grazing in a field off in the distance from the lookout. It was the perfect place to inspire us to head over to the mountain.

We loaded back into our trusted minivan and drove around to the trailhead. It wasn’t hard to find. The West Summit Trailhead was off State Highway 300, set in a nice park of its own. Restroom facilities, picnic tables and lower-level hiking trails were all available to us and served as reminders that though the Arkansas woods surrounded us, the population and amenities of the capital city were nearby. Though the park had plenty of other visitors, the paved parking lot handled the crowd.

After collecting our water and backpacks, our small party began our ascent. We couldn’t miss the trail with its large, A-frame portico that welcomes hikers.

What we found on this 1.5-mile, 725-foot climb was a challenging series of switchbacks. The well-marked trail was easy to follow, but because we were never alone, others passing us or returning from the summit left no question about where we needed to walk. The biggest question was how we should pace ourselves.

Along the trail, markers divided the hike into tenths. This confused me at first. I thought each marker was one-tenth of a mile. When I got to the top and saw 10 stakes, I knew the trail itself was divided into 10 segments. These markers helped us keep track of our progress, for better or for worse. After talking with a park ranger, he informed me that they also help rescue crews know where to find people who need help.

Once we got to the midway marker, the views started to open up. It was stunning to see, and at this elevation, with the breeze, shade and lack of pavement, we could escape from the summer heat of the cities. Don’t let me mislead you. It was still a hot summer in Arkansas, but the heat on the mountain was far better than in the city.

As we passed marker number 7, the dirt trail changed to more of a boulder climb. This was the reason the trail is labeled as moderate to hard. There was not an easy way to reach the summit without a little bit of rock scrambling. The incline wasn’t steep on the West Trail, but you do have to watch your step as you move from one boulder to the next. I took my time, paused when there was a view and then continued.

As an inexperienced, middle-aged hiker, my advice is to take as much time as you need. Enjoy the experience, and don’t worry about the others who hike as if they are trying to end their journey as quickly as they arrived. The estimated time for the hike is about 1.5 hours round trip. I would suggest you take at least that much time and plan for more simply to soak in the ecological diversity and the view.

Eventually, our party made it. As I looked around, I was the only person at the top older than 40. I’m sure people older than I reach the summit, but at that moment, it felt like I was king of the mountain. The summit had two “peaks” that allowed us to see for miles with almost a 360-degree view. From the top, we saw Lake Maumelle and the Arkansas River on one end and the city of Little Rock far off in the distance from the other. As I took all the time I could to feel the moment, I was grateful to be living in Arkansas.

At the end of the day, we turned back down the trail. This was an amazing first-time experience for me, but it won’t be my last. It certainly won’t be 18 more years before we return to the summit of Pinnacle Mountain.

A little about Tim Westbrook.

Tim Westbrook has lived in Arkansas for over 15 years. He and his family have traveled to all 48 of the lower contiguous states and lived in Europe for about 8 years. Tim is a contributor to multiple blog sites including Searcy.com and the Wabash Center. He also has his own blog, God's Great World, a site he likes to call a "travel blog with a conscience." On his site he retells his journeys and family experiences with moral and sometimes spiritual reflections. In addition, Tim has published his study on minority experiences in faith-based colleges through Routledge Research in Education. The title of his book is Spirituality, Community, and Race Consciousness in Adult Higher Education. Tim is a faculty member at Harding University and directs the Center for Distance Education in Bible and Ministry. 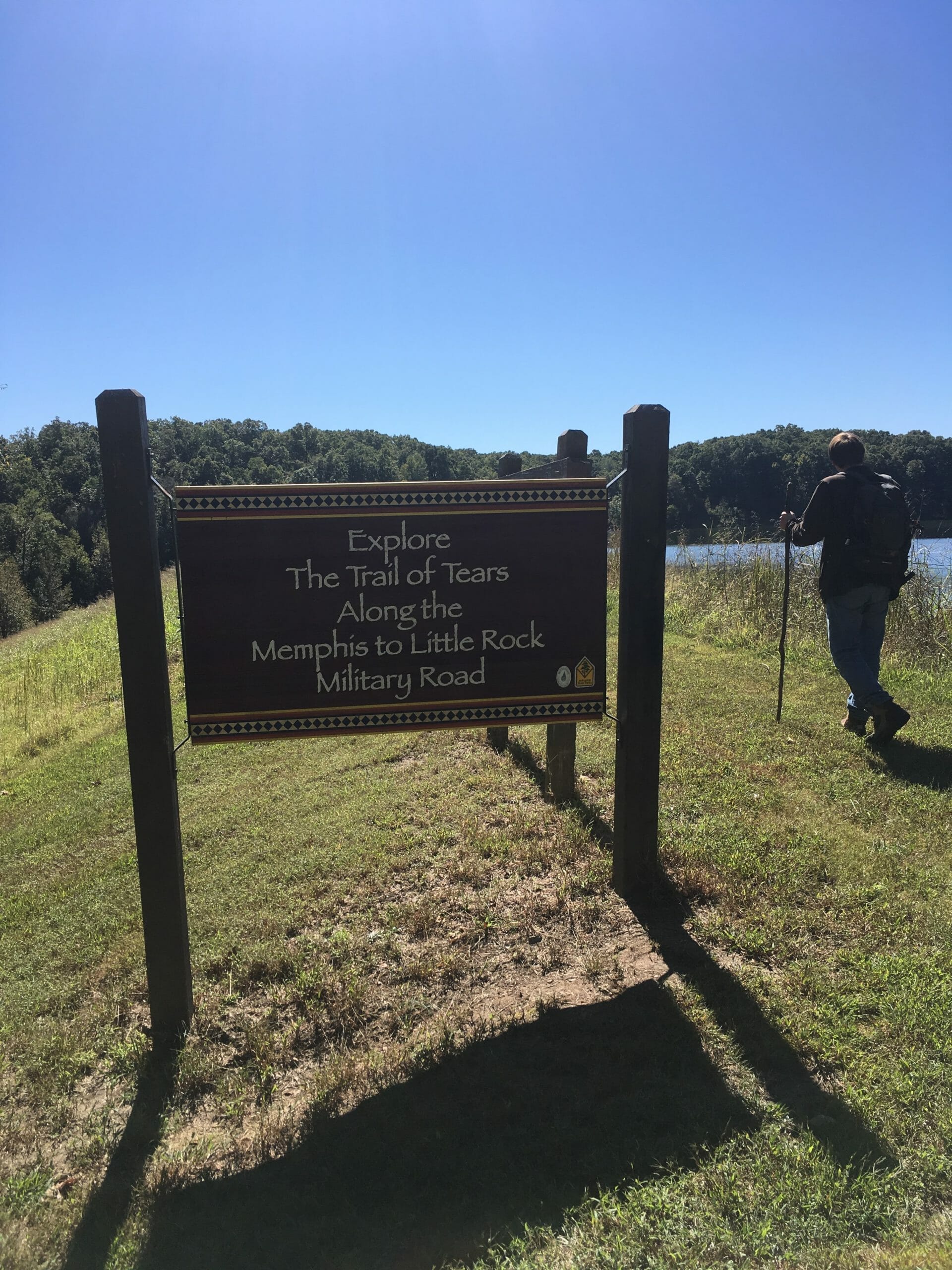 2
2
Footsteps of History on the Old Military Road

Nestled among the woods and hills of Crowley’s Ridge and just minutes...

3 responses to “A Fresh Look from Pinnacle Mountain”