Chilling in the Mystic Caverns 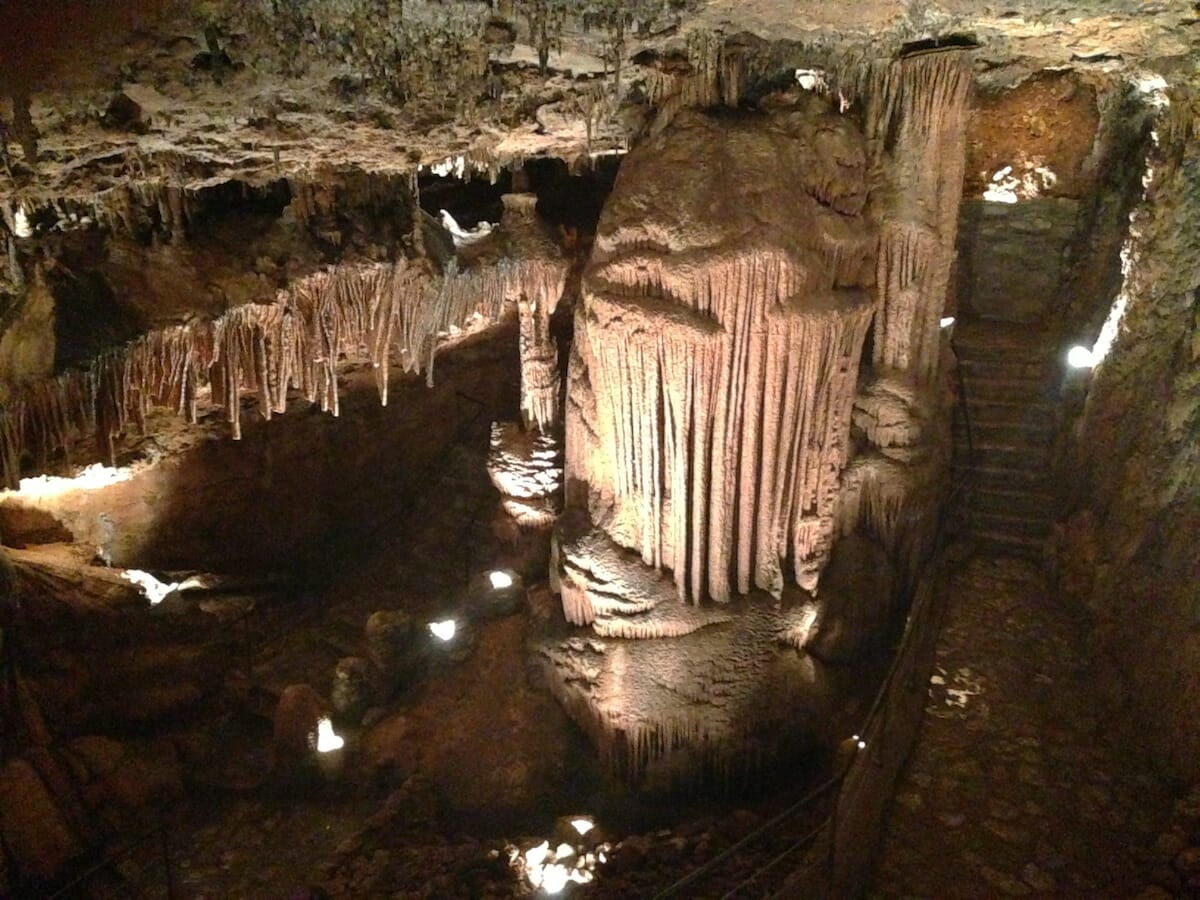 When my parents visited me late this summer, we wanted to do some hiking, but the temperature was prohibitive. Instead, I imagined a tour of the Mystic Caverns would allow us to enjoy walking and remain cool, while seeing how pretty Arkansas can be even underground. After spending a busy morning in Jasper, my parents seemed reluctant to visit the caverns, with my mother musing whether it were “a good use of time.” I insisted, so in we trooped. The cars in the lot carried license plates from Oklahoma, Texas, Idaho, Kansas, and Missouri, in addition to Arkansas. From states away, people were vacationing and visiting the caves.

Admission was $15 each to see both Crystal Dome and Mystic Caverns. Our guide, a knowledgeable and drily enthusiastic young woman named Lisa, began our tour of Crystal Dome with an emphasis on safety in the cave and respect for the formations. We were part of a group of about 12, including a woman trying to hold the hands of four small children as we walked to a door in the side of the mountain and began a steep descent down uneven, slick steps. It was immediately 30 degrees cooler than above ground. Clinging to the handrails, we listened while Lisa told us about Crystal Dome in a loud voice that was naturally amplified by the cave.

The caverns were originally part of the Dogpatch land. The Mystic Caverns were discovered in the early 1800s and much visited since then, while Crystal Dome was only discovered in 1967 when a bulldozer fell through during park construction. Crystal Dome, a living cave with active growth, is in good condition. When we reached the bottom of Crystal Dome, Lisa flicked the lights. A waterfall of stone greeted us: immense saw-tooth draperies, long lines of soda straws along the walls, and pancake stalagmites and rimstone dams on the floors. Using the beam of her flashlight, Lisa educated us on cave development and then indicated various interesting formations that resembled animals such as a walrus, alligator and sleeping bear, to the delight of the children. My father joined in and pointed to a clump of stalagmites that looked like a melting snowman. He was pleased when Lisa said she would add his snowman to her tour.

On our climb out, Lisa continued to regale us with the cave history. When it first opened to tours in 1981, the lights used were green, blue and red for dramatic effect. “We got a bad review in The Arkansas Times,” Lisa told us. “They said it looked cheesy.” She turned on the retro lights, then asked if we wanted to experience the cave in its natural setting: full darkness. The woman with four kids squatted defensively and desperately latched on to her charges, as though determined to withstand a storm, before we were launched into complete darkness. It was eerie knowing we were one sightless stumble away from the bottom of the cave. And yet—“Your shirt is glowing, Bubba!” one of the kids exclaimed.

Emerging from the 59 degrees temperature of the cave, we felt the humidity and heat of the surface more keenly. When we walked back up to the office and gift shop, we were offered complimentary bottles of cold water; this seemed to me to be uncommon thoughtfulness from a business, but then maybe it’s Southern hospitality. We gratefully drank the water as we browsed the souvenirs. Since Arkansas is known for its quartz crystals, it was nice to see so many different samples for sale. Quartz crystals are lovely because they’re natural, and yet seem almost unnaturally beautiful—like the caves.

It was a relief to return underground into the Mystic Caverns. Another guide showed our group of 30 or more the original natural entrance, a narrow sinkhole from 200 years ago, and then the soot damage on the cave’s ceiling and the hundreds of stalactites, draperies, and stalagmites that had been broken and removed for sale. The soot, we were told, came partly from decades of pine torches and kerosene lantern visits, but mainly from a hidden distillery maintained in the cave during Prohibition. Despite smoke damage and ransacking, the Mystic Caverns were impressive: larger and easier to explore than Crystal Dome, with good paths. In addition to hosting a secret moonshine distillery, the cave was also a hot spot for dances, with the acoustics of the cave boosting the performances of bands. To demonstrate this aspect, a woman was encouraged to stand on an upper ledge and lead us in song. She sang “Amazing Grace.”

At the conclusion of our tour, we were again permitted to experience the awesome sense of the caverns in the dark, which was shattered not by a child in a glow-in-the-dark shirt, but rather by preteens with smartphones. They were absorbed in uploading pictures of the cavern online, and I gathered they had had a good time. The adults and children around us seemed to agree: the caves mesmerized us, and we all appreciated dodging the sun for a few hours. Calling it “a good use of time” is an understatement.

Taking advantage of group rates, families and friends will enjoy the mild activity of exploring caves while spending time together, and shaded picnic benches are available by the parking lot. The caves can flood during heavy rains, limiting or canceling tours, so call ahead if you’re unsure of weather conditions. Tours are still offered through the fall and early winter; in October, the old, dark, and chilly caverns take on a spooky air, and in December, a Christmas concert is held in the operatic Mystic Caverns.