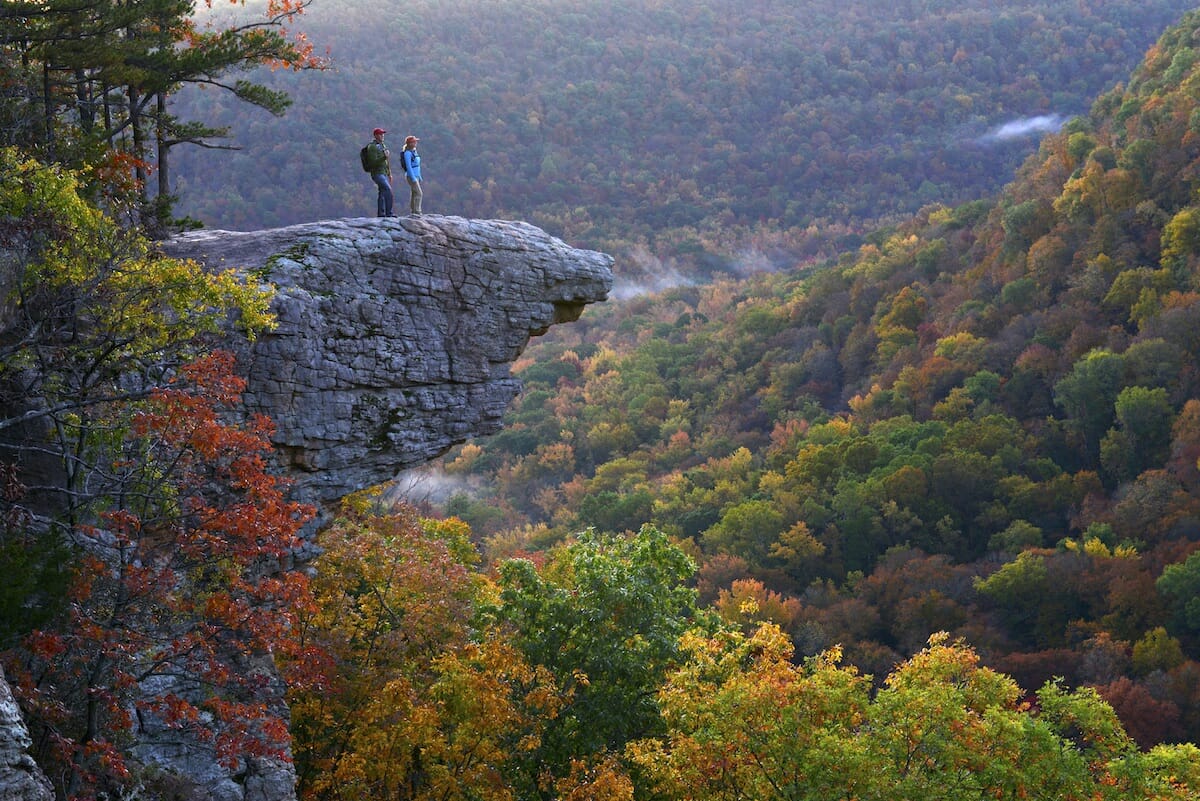 My husband Garrett and I were in the mood for a fall hike. We were living in Compton at the time, so the drive to Ponca in the Upper Buffalo Wilderness to hike to Whitaker Point, known interchangeably as Hawksbill Crag, was easily accomplished. Driving down Highway 21 South, we followed directions looking for the Boxley Bridge to indicate the turn for County Road 5 and accidentally passed it. Crossing the bridge, we pulled over to turn around, noticing two cars driving behind us doing the same thing. After turning around, we joined a line of cars beginning to ascend the gravel road up the mountain. The road was bumpy and narrow, with the mountainside drop-off looming too close for comfort—especially as cars were approaching us, leaving the mountain, forcing everyone to drive in two lanes. For about 6 miles we passed other dirt roads and saw houses along the way, causing me to reflect that there were people who lived there and drove that rough road regularly.

Earlier that day I had texted a friend, Ashel, whom I knew had completed the hike the previous week, asking what to expect. “You will see a lot of cars near the trailhead, and there is a huge rock where you start,” she responded, telling me a little more. “A lot of cars” turned out to be an understatement as we began to see cars parked on the sides of the road or in small clearings. It was so crowded that people were beginning to park carelessly, blocking other vehicles in at the entrances of clearings, and the long stretch of parked cars made it hard to tell where the focal point was. We, fortunately, found a newly relinquished spot along the road to park. License plates read Missouri, Oklahoma and Texas, along with Colorado, Tennessee, South Dakota and Louisiana. Many vehicles with Arkansas tags also had University of Arkansas decals, and dozens of college students on the trail wore their Greek shirts.

For as many folks from the region were there, no one seemed to have hiked the trail before. We gathered with a few people who also didn’t know which direction to take to the trailhead, and we began walking the wrong way, although we didn’t realize it at the time. People arriving parked and began walking the same direction. When we reached the end of parked cars and still saw no sign of the trailhead, we halted in uncertainty. A young couple joined us and I asked them if they had hiked the trail before and knew where it began. The woman said she had hiked the trail as a child and pointed the way we had been walking, down the road that sloped gradually away from us–the wrong direction.

“I’m going to go with downhill as the right way to go,” her boyfriend commented smarmily as they began walking. The group faithfully followed, but Garrett and I decided to try searching the other direction. We set off briskly, aware we had already wasted time and energy walking back and forth on an incline before even beginning the trail to Whitaker Point. Finally, we spotted the large rock that marks the trailhead. Cars parked around it had partially obscured it. It was smaller than I had imagined, with an inscription indicating it honored former Arkansas Governor Dale Bumpers.

It was an easy hike with some gradual dips and rises in the trail, but it felt good to be hiking and heading toward a spectacular destination, one of Arkansas’s most recognizable natural locations. The trees were brightly colored and leaves were falling in droves, so heavily and constantly that it seemed the branches should be bare. The trees, however, had plenty more ammunition, as if a magician’s trick kept them replenished.

The only difficulty we faced was in sharing the trail with hundreds of other people and the possibility of slipping on the leaf-strewn path. As the trail began to parallel the edge of the bluff, this carried the added danger of stumbling or slipping off the edge. There have been a number of deaths over the years associated with Whitaker Point: this is not a trail on which it is advisable to take children, nor would any risky stunts for the sake of a cool picture be wise. Most falls occur not from the rock itself, but from nearby bluffs and boulders as there are many rock formations along the path that are similar to Whitaker Point. As we hiked, this caused people around us to become excited time and again as they thought they had reached the famed Whitaker Point, only to have their excitement dim as they realized the trail continued. But these massive rock structures are opportunities to enjoy a repeating pattern of beauty in nature rather than cause for disappointment.

Once we reached Whitaker Point, I was both disappointed and impressed by how many people were congregated on and around it. It would have been impossible to get a solitary snapshot, let alone try to take a series of careful photographs from different angles. Nearly 30 people stood on it at a time, some trying to take group photos and others waiting nearby, having picnic breaks and waiting their turn to pose for photos. The jostling crowd made me nervous. We stood on the platform of rock to take pictures, but I had to get close to the tip to take a picture of the view and even then a nearby man photobombed my efforts. I was immersed in the power of that vista, and the awareness of the enormity of the space surrounding me made me momentarily dizzy.

We returned on the same trail, which amounted to about a 3-mile hike. It was not a challenging hike, so the beauty of it seemed disproportionate to the energy we had expended. I talked to three other people who had hiked the trail around the same time I did, and although they said it was busy, it had not been as crowded for them as it was during my visit. To beat the crowds, avoid weekend hikes and plan a trip early in the day. Many photographers hike in the pre-dawn darkness to be in place to capture the iconic sunrise. If you do this, take a flashlight and use extreme caution in the dark as you prepare to enjoy a breathtaking scene.

Banner photos courtesy of Arkansas Department of Parks and Tourism. All other photos by the author