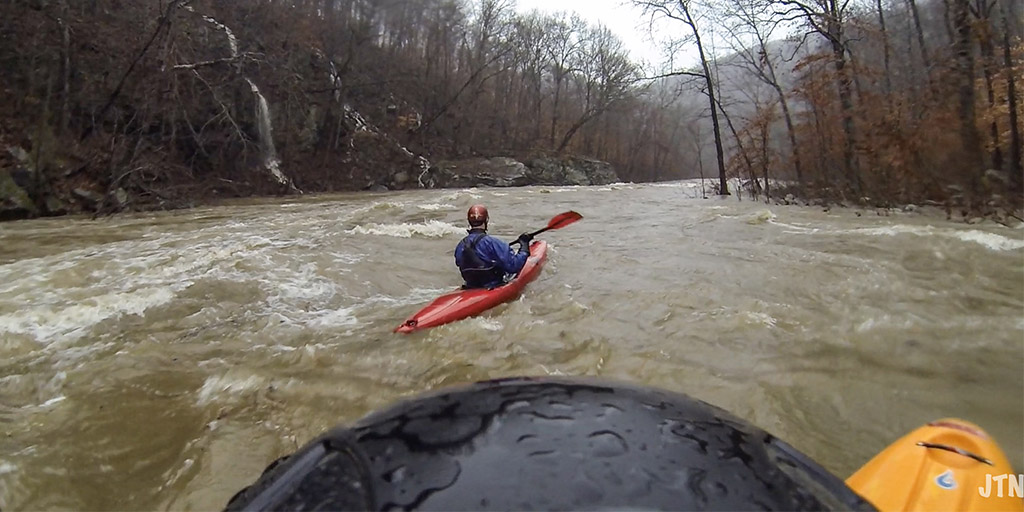 Two weekends ago Northwest Arkansas experienced an unprecedented winter flood. While most of us took this as an opportunity for hibernation, others, like Jake Newcomb and his troop of thrill seekers, hurried out to the Buffalo to give their kayaking skills a true test.

They arrived in the Boxley Valley, rain pouring in sheets, with hopes set on a Beech Creek run.

“Boxley was unlike anything I’d ever seen before,” Newcomb said. “The bluff-lined mountains on either side of the valley were all spouting waterfalls where I’d never known waterfalls to be.”

“A quick look at Beech and we determined that it was already so high that it topped our skill level,” said Newcomb. “We began tossing around the idea of running The Hailstone instead.”

The Hailstone, a 15-mile stretch of rapids, fills the canyon within the 12,000-acre upper Buffalo Wilderness Area. With no viable roads or hike-out options, the area was a secret for years, to keep would-be paddlers from its then-perceived danger.

Newcomb said that today’s technology has changed things. “While the Hailstone is certainly no cakewalk, it definitely shouldn’t remain hidden, as it is truly a whitewater and wilderness gem,” he said.

Though the group had completed the Hailstone run in the past, once they set off they found the ever-rising waters had submerged visible route markers (like house-sized boulders) and that they would certainly be in for an adventure.

“That day, Arkansas was offering up the type of whitewater one would typically need to drive halfway across the country to find,” he said. “Ten-foot standing waves were recurrent.”

As the river began to flash, the water became unpredictable and unstable.

“It was like the water didn’t know what to do with itself,” Newcomb said. “A giant wave that was there one second, might be completely gone and turned into a giant boil the next.”

The kayakers witnessed hundreds of waterfalls alongside the canyon walls, all adding to the inconsistent flow of the waters. The downstream water gauge topped out around 12,000 CFS, the same flow that the Grand Canyon typically carries.

Such conditions pose a challenge in the case that a kayaker becomes a boat-less “swimmer.” Swift rapids make it unlikely that fellow boaters will be able to find a closeby “eddy,” or calm spot to rest and wait up, leaving the swimmer in a precarious position. In best case situations, swimmers will be able to make it to the bank, to begin hiking to find their group and (hopefully) abandoned boat.

Ashleigh Rose (@aroseprice) is a Fayetteville native, yoga instructor, and blog producer for Fayettechill Outdoors Co. Fayettechill is an Ozark-mountain based outdoor clothing company passionate about igniting adventure and love for nature.

What started as an annual winter mountain biking tradition in the Ozark...