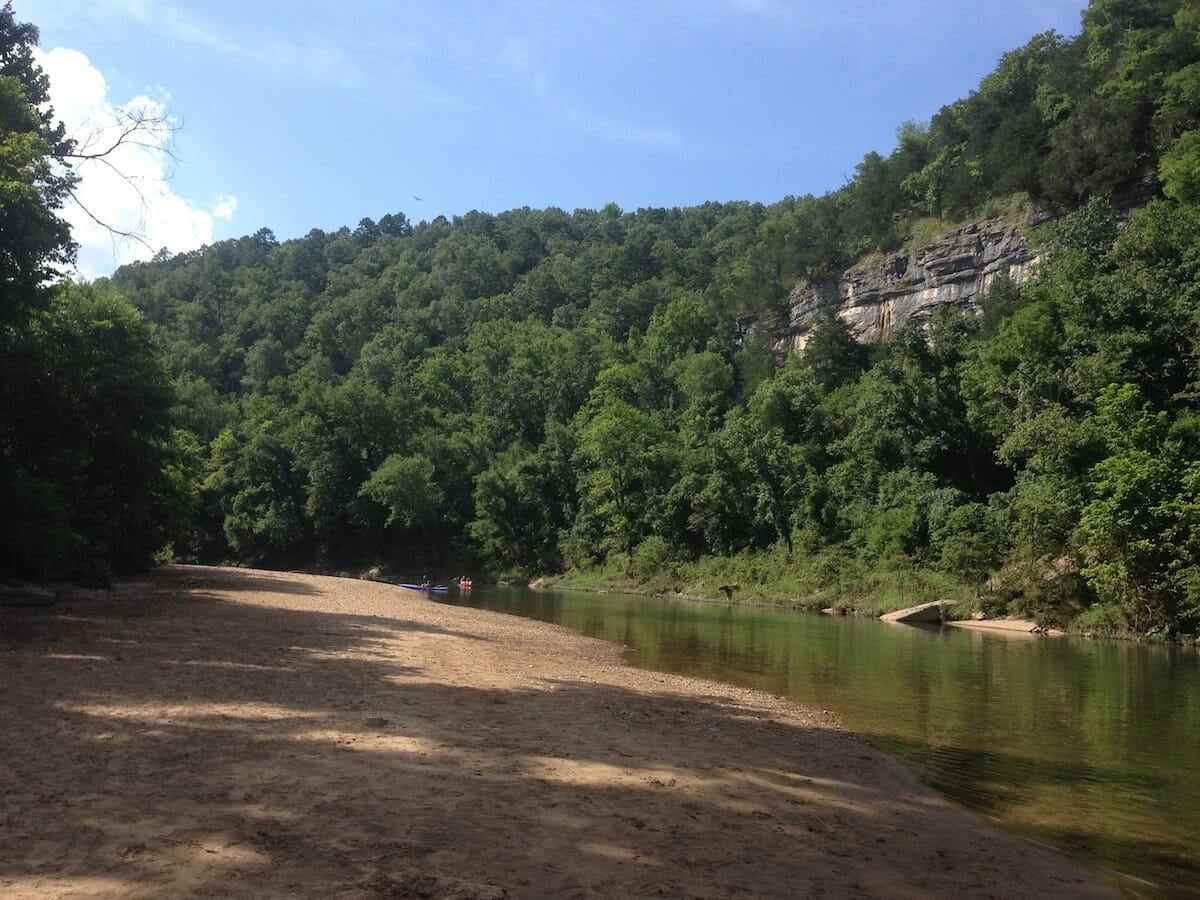 This year, the National Park Service celebrates its centennial anniversary and urges Americans to explore 100 miles of National Parks—be it by canoe, horseback or on foot; this is not hard to achieve in Arkansas. In a state with seven national parks and a beautiful landscape of rivers, lakes, waterfalls and forests, the Buffalo National River is a particularly lovely example of why Arkansas is touted as the Natural State.

To prevent the river from being dammed, advocates pushed for the Buffalo to be nationalized under the National Park Service. On March 1, 1972, Congress designated the Buffalo River as the first National River in the United States. Today there are many ways to experience and enjoy the Buffalo National River, one of the few rivers in the nation that remains undammed.

That the river was preserved instead of dammed is appreciated by those who enjoy float trips, a regional term generally referring to a relaxed cooler-laden canoe trip with a group of people. The Buffalo River stretches 150 miles, beginning in the Boston Mountains in Newton County and ending in the White River in Buffalo City.

A 15-mile stretch at the Upper Buffalo is known as “the Hailstone”; during times of heavy rainfall, this is an area of rapids and white water, a true challenge to thrill-seeking kayakers. The middle to lower Buffalo, where the river is wide and slow-moving, is more popular for float trips. There the Buffalo often resembles a lazy river, complete with tourists in inner tubes. In fact, critics of the plan to nationalize the river dismissed the Buffalo as good for little else apart from the spring and early summer months when the water level is up and people float it.

While the spring and early summer months are certainly the best time for float trips, kayaking and canoeing are possible at different parts of the river nearly year-round, though it may be with difficulty. Still, recreation in the Buffalo National River park grounds is far more inclusive than just floating.

The off-season for floating, fall and winter, is the best time to hike the over 100 miles of trail in the wilderness surrounding the river. In addition to the Buffalo River Trail, which joins the Ozark Highlands Trail, there are plenty of trails of day trip length to scenic locations, such as the Compton Trailhead to Hemmed-in-Hollow, the tallest waterfall between the Rockies and the Appalachians, and historic locations such as Colliers Homestead in Tyler Bend.

At least a dozen campsites line the Buffalo, and the river is good for bass fishing and sighting wildlife, including black bears, elk and even bald eagles. Over 360 documented caves exist within the Buffalo National River area, though most are currently closed. The park has more than 75 miles of trails and four campsites that can accommodate camping with horses. Photography is another popular interest to pursue around the river. Hawksbill Crag is one of the most-photographed locations in the state.

The National Geographic lists the Buffalo National River as the second most underappreciated national park in America. This sort of backhanded compliment is amended by findings from a National Park Service survey. It discovered nearly 1.2 million visitors flocked to the Buffalo River in 2011. The draw is the captivating wilderness scenery of the unimpeded river, lined with limestone bluffs as tall as 500 feet. The river, also classified as a Wild River and Scenic River, is more than a local landmark—it’s a national treasure.