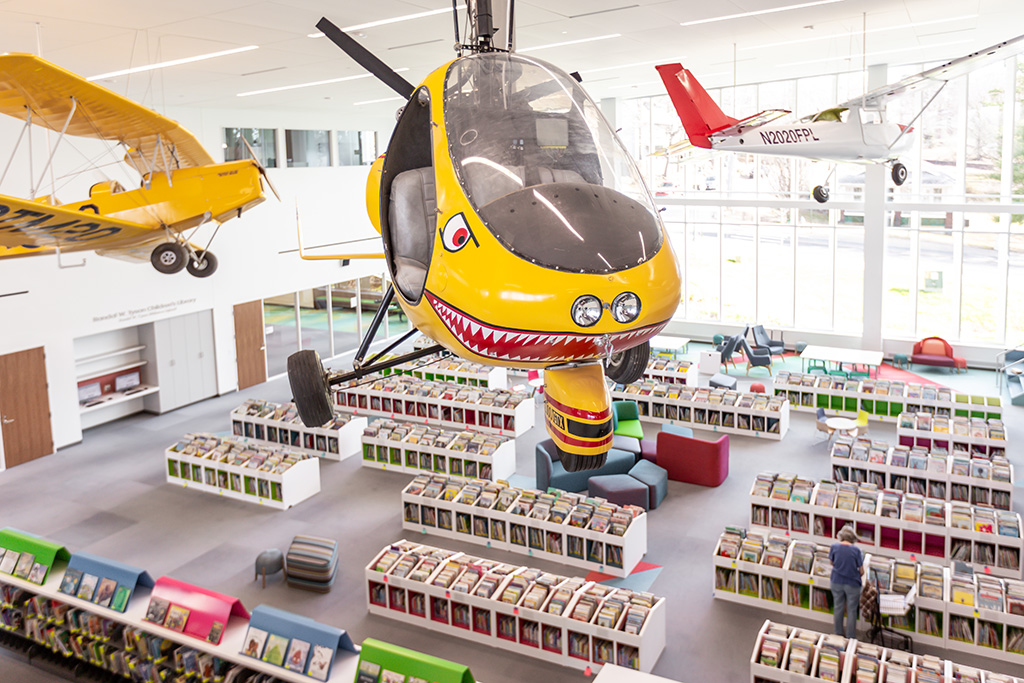 A little over eight years ago, Fayetteville Public Library executive director David Johnson stood near the window on the south end of the library looking over the shuttered City Hospital building and told the Fayetteville Flyer about the library of his dreams.

Soon, much of the vision Johnson laid out all those years ago will come to fruition when the newly-expanded facility officially opens to the public.

Johnson said the library is set to open sometime early next week, with limited capacity and social distancing measures in place. He can’t wait for everyone to see it.

“One of the things I’m really anticipating is seeing the delight in the expressions on people’s faces,” Johnson said. “The little kids. The returning patrons. It’s very special, and that’s something I’m looking forward to, just seeing those reactions.”

The expansion is impressive. The facility includes over 100,000 square feet of space, including many of the amenities that Johnson was wishing for shortly after he took over the job nearly a decade ago.

That vision has changed and evolved over the years, but Johnson said that’s how it is in his line of work.


A new staircase leads from the original building into the new facility. / Photo: Todd Gill

“We have held the community’s needs as our north star,” Johnson said. “Some of those needs have changed since we started this process, but if you pursue those needs vigorously, you’ll be right in the sweet spot.”

That change will likely continue, he said, but he said he believes the library is up to the challenge to adapt as the community grows.

“That is the thing that is cool,” he said. “Everything changes, and communities, as they grow and/or retract, their needs, their desires, the things they are seeking for quality of life, they change. I think what we have built with this expansion is going to allow us to change and be flexible as the community changes.”

Mayor Lioneld Jordan, who worked on the campaign to pass the millage for the project, said that a strong library can provide opportunities for those in the community that might not otherwise have them.

“I saw somewhere a quote that said a library is like a well, but you have to bring your own bucket,” Jordan said. “That is what it is. This library is going to level the playing field for so many in our community. It’s going to allow people to go to the library and educate themselves.”

Jordan said the library has been an important part of Fayetteville for years, and the new and improved version is just going to add to that experience.

Qualls said as a board member, he’s toured the library multiple times over the course of the expansion’s construction. Each time, he said, there was so much to take in he felt he needed to start over again to absorb it all.

“You know, our capital campaign was called Beyond Words,” Qualls said. “When I first saw the expansion, that’s exactly what it is. You really need to see it in person to convey the enormity of it.”

The Fayetteville Public Library, paid for in part by a $26.5 million millage increase approved by voters in 2016, is packed with more amenities than we can mention in a single post.

We’ll do our best to hit some of the high points, though.

There’s a newly-expanded children’s library that includes sections for preschoolers, elementary school kids, and teens. The children’s library area includes a new facility for storytime events with glass windows so parents can see inside. There’s also a new craft room for kids to explore their creativity.

Hanging overhead are antique aircraft on permanent loan from the Arkansas Air Museum to help further stimulate imaginations, with around 32,000 square feet of books for kids to peruse and enjoy. There’s space for strollers, and two comfort rooms for nursing moms.

The newly-created teen area includes thousands of books for young adults, graphic novels, and more, with seating areas for study groups and socializing. There’s even a teen-only area, and a gaming room with a large TV for esports and other gaming options. The teen room includes large west- and south-facing windows that provide views of the new Fay Jones woods area now under construction as part of the city’s Cultural Arts Corridor.

A new film produced in Fayetteville is complete and ready to hit the...