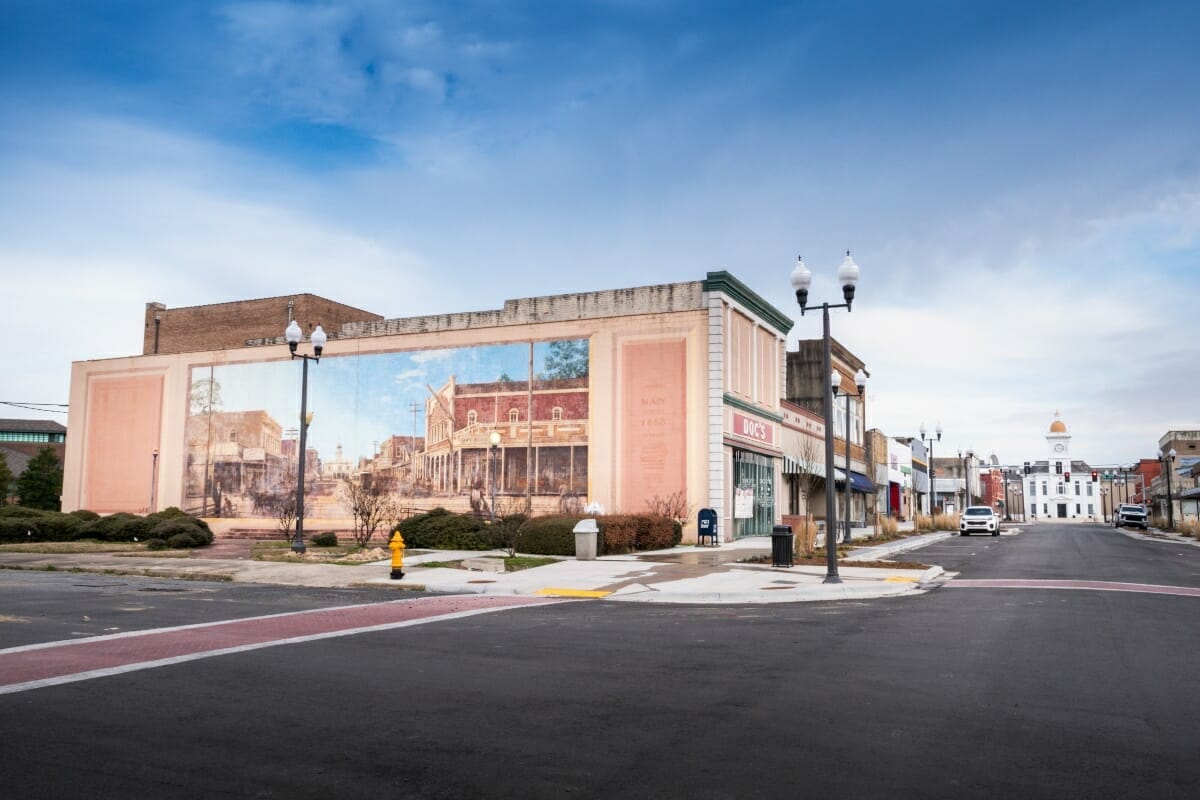 On the edge of the Mississippi Delta, where the rich, flat farmland meets Arkansas timberland, the city of Pine Bluff has thrived for nearly 200 years. From Pine Bluff’s earliest start before statehood to today, this southeastern Arkansas gem offers much for visitors and residents alike to love.

Pine Bluff originally grew out of a settlement named the Bonne Reserve, farmed by the Bonne family with roots in Arkansas reaching back into the 1700s. Joseph Bonne was born in 1793 and baptized at Arkansas Post, Arkansas’s earliest settlement, by a visiting priest. The Bonnes lived 50 miles up the Arkansas River. In 1818, at 25 years old, Joseph Bonne was listed as an interpreter for the U.S. government at the signing of the first treaty between the U.S. and the Quapaw Nation. The Quapaw agreed to cede 30 million acres south of the Arkansas River to the U.S. in exchange for 1 million acres between the Arkansas and Ouachita Rivers, plus a payment in annual goods.

After this, Bonne moved his family 5 miles up to the first bluff on the Arkansas River. He built a log cabin and a tavern, and the town was officially recognized in 1832 as Pine Bluff. During the next 30 years, Pine Bluff became well established because of its location on the river. Steamboats brought new settlers and goods, as well as transported cotton from Pine Bluff’s cotton bale production center. During the Civil War, the city saw both Union and Confederate troops use steamboats to move troops and supplies through Arkansas.

When Little Rock was captured by the Union army in October 1863, a small Union garrison was stationed at Pine Bluff. On Oct. 25, 1863, Confederate forces attacked the garrison under orders from Brigadier General John Sappington Marmaduke. Union Colonel Powell Clayton used hay bales from the distribution center to block streets into the city, effectively obstructing the assault. The Confederates retreated, and the Action at Pine Bluff was the last large military engagement in Arkansas in 1863.

An engine at the Arkansas Train Museum in Pine Bluff.

After the Civil War, Pine Bluff enjoyed an extended period of prosperity and growth. With excellent farmland and easy transport, first through steamboats and then through the railroad, Pine Bluff became a source for cotton in the latter half of the 19th century, followed by lumber in the 20th century. The city grew from 2,000 to 10,000 by 1890. The railroad arrived in 1881 to connect the city to Little Rock, and the town quickly achieved modern services like electricity, cable car service and a public school system. The Branch Normal School of the Arkansas Industrial University, which is a historically Black university, was established and eventually became the University of Arkansas at Pine Bluff.

By the turn of the century, Pine Bluff was the third-largest city in the state and economically prosperous. The Hotel Pines opened in 1913 as one of the nicest hotels in the state and kept a steady business until the railroad line closed in 1968. Life was not prosperous for all of Pine Bluff’s residents, though. The city’s African-American population endured racism and periodic lynchings, which set the stage for the city to play a role in the Civil Rights Movement.

Jefferson County Courthouse was built in 1856 and nearly destroyed in a fire in 1976. It was rebuilt and restored and placed on the National Register of Historic Places in 2008.

Pine Bluff gained a National Guard Armory in 1932 and then a federal munitions arsenal, Pine Bluff Arsenal, when World War II started. Before the war, Pine Bluff had been hit by the Great Flood of 1927 and the Great Depression, both of which had devastating effects on the economy, but the city continued to grow. The university, at that time called Arkansas Agricultural, Mechanical & Normal College, drew many students from the area.

After World War II, Pine Bluff saw its share of civil rights achievements. In 1954, the Pine Bluff chapter of the National Association for the Advancement of Colored People (NAACP) challenged the Dollarway School District to accept Black students. Although the students were denied entry, the subsequent legal challenge resulted in the school district being ordered to cease segregation. Pine Bluff also held sit-ins, boycotts, and demonstrations to push for rights for African Americans.

Pine Bluff continued to grow through the second half of the 20th century, producing many notable citizens, including trumpet player Clark Terry, NFL player Don Hutson, NBA player Joe Barry Carroll, and author/musician/civil rights activist Julius Lester. In 2016, the city elected its first African-American mayor, Shirley M. Washington. The city is the largest in Jefferson Country at just over 41,000 people. Although this is a decline from its peak population of 57,400 in the 1970s, the city is actively working to restore its downtown and draw visitors to the area.

There’s plenty to do to learn the history of the area and enjoy what the city has to offer today. The Arkansas Railroad Museum tells the history of railroads in the state with train cars on display. The Arkansas Entertainers Hall of Fame captures the stories and objects of Arkansas’s most famous artists, musicians, and actors. The Arts & Science Center of Southeast Arkansas has a long history and is a center for permanent and temporary art and a space for a variety of creative and family events.

The Governor Mike Huckabee Delta Rivers Nature Center offers 130 acres of trails, wildflowers, a museum and store, and a 20,000-gallon aquarium. Pine Bluff is surrounded by outdoor opportunities for adventure outdoors with the Arkansas River and Lakes Langhofer and Saracen nearby, as well as the large Pine Bluff Regional Park and other parks throughout the city.

If you want to take a tour of Pine Bluff’s history from your home, you can visit explorepinebluff.com and learn more about the area’s rich history in the civil rights movement, blues and delta music, and its many historical buildings. For those planning a trip in person, find recommendations for things to do and places to eat, including great BBQ, southern and soul food, catfish and seafood, and more. Pine Bluff is rich in history and in what it has to offer Arkansas today.

All photos courtesy of the Arkansas Department of Parks, Heritage and Tourism.