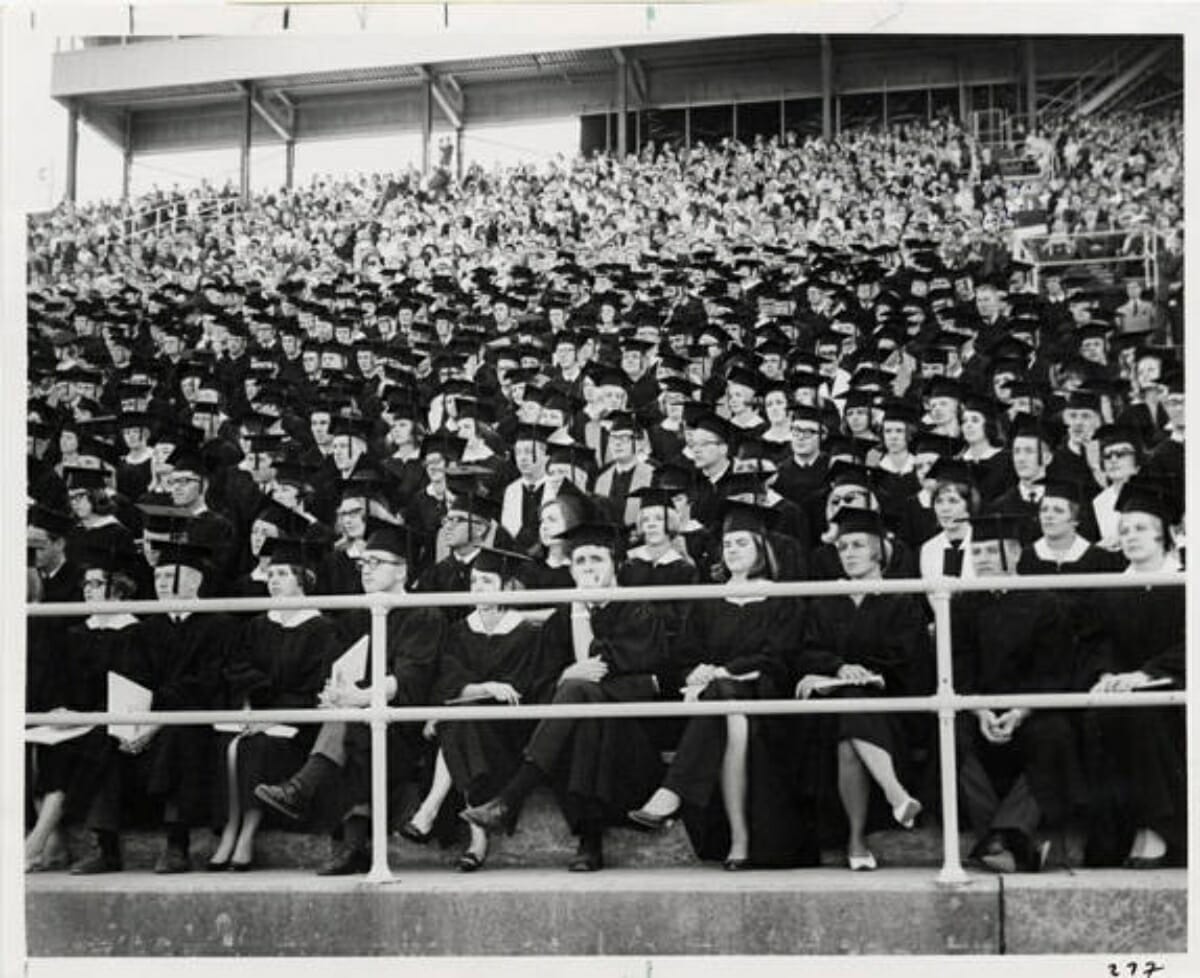 The earliest university in Arkansas, Cane Hill College, awarded its first degree in 1856. Now Arkansas boasts over 40 public, private, and two-year universities and colleges. Some graduates have distinguished themselves in their field for outstanding accomplishments. Though you might not have heard of them, these Arkansas graduates have all earned recognition and distinction within their varied careers.

When Euine (pronounced yu-on) Fay Jones arrived at the University of Arkansas in 1938, he didn’t know it would be 12 years before he received his degree in architecture. The university only offered architecture classes through the engineering department, so he enrolled in civil engineering. His college education was interrupted by World War II. Jones was a reconnaissance pilot in the Pacific. He eventually returned to the University of Arkansas in 1946 to study in the newly formed school of architecture. Upon receiving his degree in 1950, he immediately began his master’s degree at Rice University. Soon he returned to Arkansas to teach in the architecture department and also formed his own firm.

Jones also formed a relationship with famed architect Frank Lloyd Wright. He visited the architect’s artist colony, Taliesin, and spent several months studying under Wright, an experience that impacted Jones for the rest of his life. Over the course of his career, Jones designed 218 projects, of which 129 were built. Many of these buildings are in Arkansas. Thorncrown Chapel in Eureka Springs is his most highly acclaimed building. And you can stay in his Stoneflower House in Heber Springs. He died in 2004 in Fayetteville. In 2009, the University of Arkansas deemed its school of architecture the Fay Jones School of Architecture and Design.

William Dillard built one of the largest and most successful fashion and home furnishings chain of stores in the nation. He learned about retail from his family, who owned a small store in Mineral Springs, Arkansas. Dillard attended the University of Arkansas and received a degree in accounting in 1935. He followed up with a master’s degree in business from Columbia in 1937. Then Dillard returned to Arkansas and opened his first store in the small town of Nashville. From that first store, Dillard began to hone his business strategy of purchasing small town department stores. Later, he also launched stores in shopping malls, recognizing the enormous opportunity the centers brought to his business. Dillard expanded to over 300 stores and 43,000 employees. He was well-known for his work ethic, integrity and a streamlined business model. He died in Little Rock in 2002. In 2020, the accounting department at the Walton College of Business at the University of Arkansas was named in his honor.

In 1918, German mathematician Karl Reinhardt discovered equations for five, non-regular pentagons that could tile a plane. Reinhardt’s discovery was significant. In mathematics, tiling a plane is the ability to cover a flat surface completely with shapes without creating gaps or overlaps. It was well known that triangles, squares and hexagons could achieve this but regular five-sided pentagons could not. Reinhardt’s discovery opened the possibility that more irregularly shaped pentagons could be used to tile a plane. Between 1968 and 1985 more discoveries were made until the list stood at 14 irregular pentagons. For 30 years, that number remained the same. Then two Arkansas Ph.D. graduates had a breakthrough.

Casey Mann and Jennifer McLoud-Mann both attended the University of Arkansas to study graduate-level mathematics. Mann graduated in 2001 with his doctoral degree in mathematics after focusing on discrete geometry. Mann-McLoud graduated in 2002 with her Ph.D. in mathematics with her dissertation focusing on commutative algebra. In 2015, they discovered the 15th irregular pentagon that could tile a plane after two years of research. Undergraduate student and computer software specialist David Von Derau assisted by using the Manns’ algorithm to create a computer program to do the calculations. Both Mann and McLoud-Mann continue to teach and research from the University of Washington Bothell, where Mann focuses his efforts on tiling and lattice knots. McLoud-Mann chairs the department of engineering and mathematics and concentrates her efforts on knot theory and combinatorics.

Arkansas graduate Bill Carter has enjoyed a career that is as distinguished as it is unique. Carter grew up in Rector, Arkansas, and joined the Air Force in 1953. Upon his return, he enrolled in Arkansas State University and graduated in 1961. He entered law school at the University of Arkansas in Fayetteville but was recruited by the Secret Service in 1962. He joined the service and moved to Washington D.C., where he sometimes served on Jacqueline Kennedy’s protection detail among his other duties. Though not in Dallas when President Kennedy was assassinated, Carter interviewed Jack Ruby and assisted with the Warren Committee’s investigation.

Bill Carter wrote, “Get Carter: Backstage in History from the JFK Assassination to the Rolling Stones”
to detail his unusual life.

In 1966, Carter returned to law school in Arkansas and graduated with his law degree in 1967. He represented some interesting clients while practicing law, notably the Rolling Stones. He also represented country music star Tanya Tucker and singer David Bowie. Carter moved to Nashville to start a law practice nearer to the center of country music. He also represented Reba McEntire, wrote an autobiography over his involvement in the Kennedy investigation, and supports students at his former high school through the Helping Hands Foundation.

Debbye Turner-Bell was raised in Jonesboro and attended Arkansas State University to earn a degree in agriculture in 1986. In 1988 she was the first runner-up in the Miss Arkansas pageant. She enrolled at the University of Missouri to pursue a doctoral degree in veterinary medicine and graduated with her doctorate in 1991. In 1989 she won the Miss Missouri crown and in 1990 she won the Miss America crown, only the third African American to do so. After her year of service as Miss America, Turner-Bell pursued her veterinary career before turning to broadcast journalism.

She worked for CBS in various roles, including many interviews on pet care and animal health, even interviewing George and Laura Bush from the White House about their family pets. Turner-Bell was then the lead U.S. anchor for Arise News, a London-based world news channel. Throughout her varied career, Turner-Bell has given many motivational speeches to schools, colleges and organizations. She often speaks on the topics that are most important in her own life: education, goal-setting and determination. She continues to advocate for animals and serves on many boards. Once the winner of the Miss Jonesboro pageant, this former Miss America has taken her message of excellence from Arkansas around the world.

Mary Lowe moved to Kirby, Arkansas from Texas in 1942, when she was 11 years old. When she entered the University of Central Arkansas, she planned on pursuing a career as a home economics teacher. She took a chemistry class as part of her basic degree requirements and learned about Marie Curie and the pioneering chemist’s research on radioactivity. She switched career tracks and pursued chemistry instead. Upon graduating from UCA, Good headed to the University of Arkansas and obtained a doctorate in chemistry in 1955. She also met and married fellow student William Good, who was pursuing a doctorate in physics.

The Goods spent the next 20 years teaching for Louisiana State University at the newly opened New Orleans campus. While there, Lowe Good used a new type of technology called Mössbauer spectroscopy to study the element ruthenium. In 1980, she left academia to oversee research at Signal Research Center. She was also appointed to the National Science Board in 1980 by President Jimmy Carter. She continued to serve in government for the next 16 years, including as undersecretary for technology in the U.S. Department of Commerce for Bill Clinton. She returned to Arkansas and teaching in 1997, where she taught at the University of Arkansas at Little Rock until 2011. Good received numerous awards for her work. She died November 20, 2019, after a lifetime of service in the sciences to Arkansas and the United States.

Each year Arkansas continues to graduate students who, like these distinguished alumni, will continue to challenge and shape the state and the world.