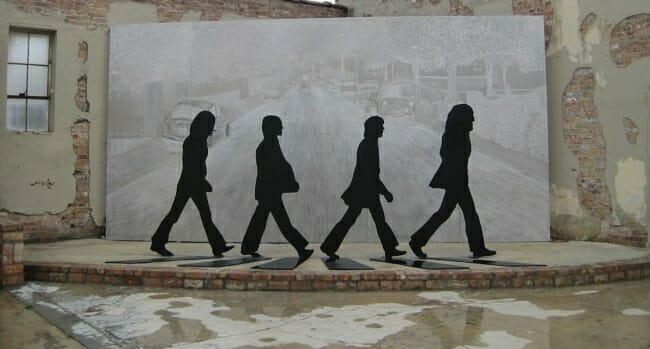 The Beatles visited Arkansas while on tour in America in 1964. Their plane landed in Walnut Ridge Friday, Sept. 18, 1964. The Fab Four took a smaller plane to a Dude Ranch in Missouri but returned to the Walnut Ridge airport Sunday to fly to their next concert. Word had gotten out of the Beatles’ arrival, and a crowd gathered on Sunday to see the most famous rock band in history. The Beatles Abbey Road sculpture features life-size silhouettes of the Beatles crossing Abbey Road and is a fun photo opportunity. Beatles Park is at 110 Abbey Road in Walnut Ridge.

While you’re in Walnut Ridge, stop by this second roadside attraction. The 115-foot concrete guitar is at Cavanaugh Park and includes audio narration by Sonny Burgess about Conway Twitty, Johnny Cash, Carl Perkins, and other rock-n-roll legends. The guitar is on SW Front Street.

The Raven at Ravenden

This one definitely qualifies as a roadside attraction. Ravenden sits off Highway 63 in Lawrence County and boasts a 12-foot statue of a raven along with the American and Arkansas flags. The raven is simply a symbol of this small town, but it makes a nice photo opportunity. It’s only 23 miles away from Walnut Ridge, too, so you can make an afternoon out of this trio of roadside attractions.

Can pie be a roadside attraction? The answer is a resounding yes. Charlotte’s Eats & Sweets has served up pie and more to those traveling through Keo since 1993. Charlotte’s coconut cream pie was featured in “Southern Living’s” article “The South’s Best Pies.” The cafe is in the old pharmacy building in downtown Keo off Highway 165 and still has a soda fountain, a full menu with daily specials, and of course, a wide selection of pies. This attraction is worth the stop.

Typically a zoo wouldn’t qualify as a roadside attraction, but something about an alligator farm feels like a roadside stop. Add in that the Arkansas Alligator Farm & Petting Zoo is the oldest attraction in Hot Springs, and it definitely feels like an attraction worth a visit. The farm has been in operation since 1902 and is praised for its family-centered feel. The farm has alligators, primates, mountain lions, wolves and more and includes a petting zoo with pygmy goats and sheep.

The Hollis Country Store has served the surrounding community since the 1930s and makes a great stop for anyone exploring the Ouachita National Forest. The store boasts the “best bologna sandwiches in Arkansas” and an interesting selection of snacks, old-fashioned candy and souvenirs. It is on Highway 7 between Russellville and Hot Springs.

Owners Burl and Jeannette Roark purchased their store nearly 40 years ago. They are known for some of the best smoked meat in the state. However, a stop at Burl’s Country Smokehouse is so much more. An interesting collection of antique moonshine barrels, car parts, trains and more create a nostalgic feel to this must-see cafe. Find it just off Highway 270 in Crystal Springs.

It turns out you can visit the Eiffel Tower in Paris. In 2014, the Arkansas town erected an 18-foot Eiffel Tower on top of a fountain, making the structure 25 feet tall. It’s painted in the same colors as the Eiffel Tower in France, and visitors can even place a lock on a nearby fence in a tradition also imported from Paris, France. Eiffel Tower Park is next to the Logan County Courthouse on West Walnut Street.

The Mammoth Orange Cafe in Redfield

The Mammoth Orange has been in business since 1966. The front of the cafe looks like a giant orange, with windows where you can walk up and order. You can also opt to order inside. The cafe serves burgers, fries, milkshakes and a daily lunch special and accepts cash only. The cafe is 25 miles south of Little Rock on Highway 365 in Redfield.

The Popeye Statue in Alma

Did you know Alma is the spinach capital of the world? At least, it has been since 1987 when residents decided to capitalize on the fact that the Allen cannery produced over 50% of the world’s canned spinach. For a while, the city displayed a paper mache statue of Popeye, which was stolen twice, but found and returned. The statue was then covered in fiberglass, but in 2007, an 8-foot bronze statue replaced the fiberglass one. It sits in the town square on Fayetteville Avenue and is an easy stop to make if you’re traveling near Alma.

Christ of the Ozarks in Eureka Springs

Perhaps the most famous roadside attraction in Arkansas, the 67-foot Christ of the Ozarks statue was built in 1966. It stands a full seven stories above Magnetic Mountain and overlooks Eureka Springs. Visitors can stop for pictures with the statue or see the Great Passion Play for the full experience. Learn more at greatpassionplay.org.

It might be a stretch to call Thorncrown Chapel a roadside attraction, but if you’re traveling to Eureka Springs, it’s worth the visit to stop and take in the beauty of its natural design. The chapel was the vision of Pine Bluff native Jim Reed, who hired famed architect E. Fay Jones to design the chapel in the woods. Completed in 1980, the chapel sits off Highway 62 and is open to the public to visit ten months out of the year and is free to enter.

If you like reptiles, or you don’t but your kids do, this is the place to stop for a visit. Snake World houses a large collection of snakes and other reptiles and offers tours with experienced and knowledgeable guides. Whether you love snakes or not, Snake World makes an interesting stop on Highway 62.

The first sighting of the Fouke Monster was in the 1940s around the small town of Fouke. A 1973 film about the sasquatch called “The Legend of Boggy Creek” cemented the town’s status as the southern sasquatch capital. Fifteen miles south of Texarkana, the Fouke Monster Mart is a must-see roadside attraction. Learn all about the history of the Fouke monster, grab your monster souvenirs and eat a made-to-order pizza all in one stop.

The Lum’ N’ Abner radio show entertained fans across the nation for many years, eventually branching into seven movies. The voices behind the radio show, Chester Lauck and Norris Goff, were both from south Arkansas and chose Pine Ridge (then Waters) as the location for their fictional characters. Today, the Lum’ N’ Abner Store and Museum keep the show’s long history alive. The museum and store are 20 miles east of Mena on Arkansas 88.

The Rich Mountain Train and Station

This miniature train ride makes for a fun break from the car. Located on top of Rich Mountain in Queen Wilhelmina State Park, the train travels 2 kilometers around the mountaintop and offers nice views and a fun ride. Inside the station, visitors can purchase ice cream and souvenirs.

Of course, this isn’t an exhaustive list of roadside attractions in Arkansas. The state is full of interesting stops, including small-town museums, wonderful cafes, historic train depots and amazing state parks. Visiting roadside attractions is a great way to explore the state. And you never know what else you’ll find along the way.