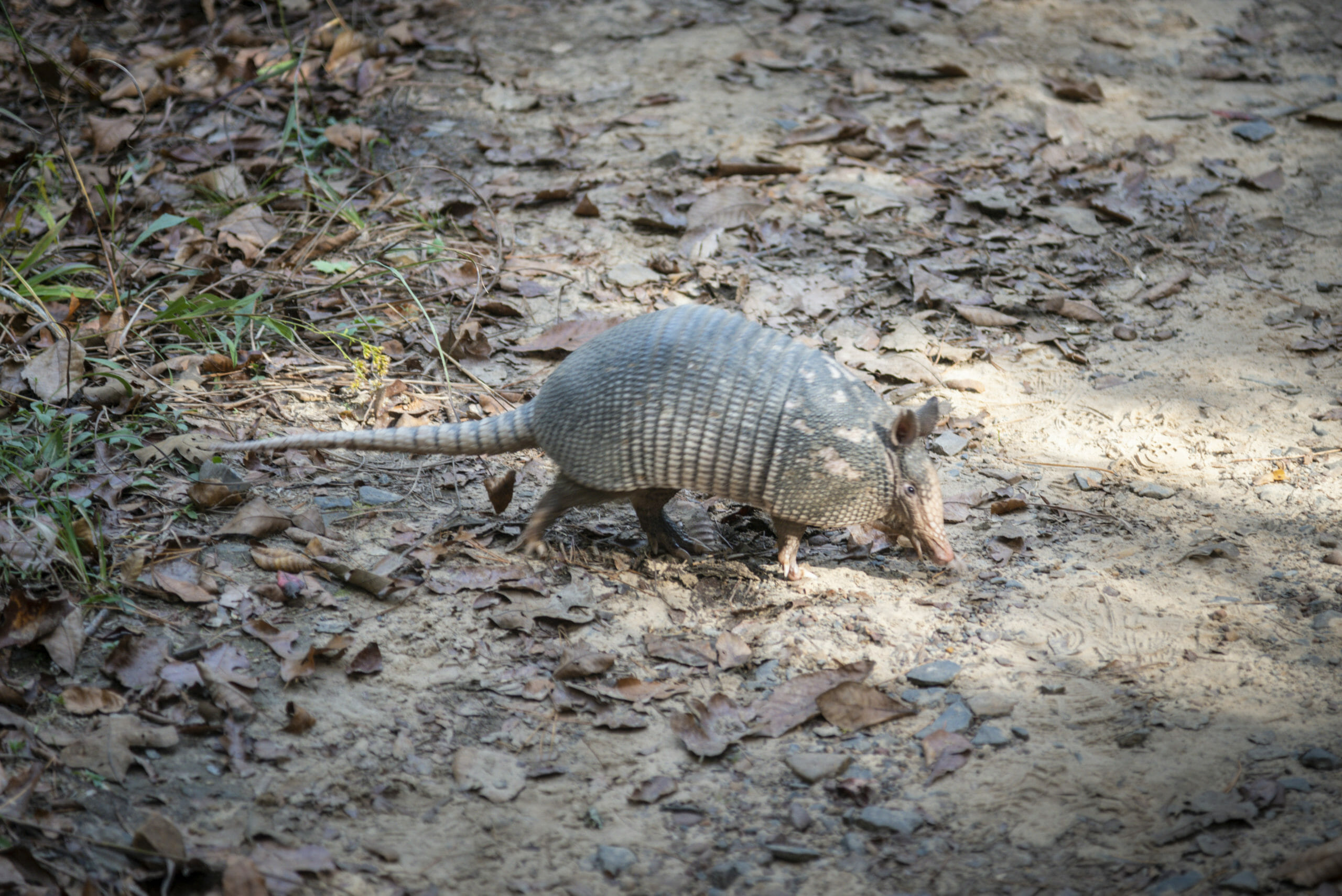 With their strange leathery coats of armor, armadillos are both unique and creepy. If you take a closer look, you might even find them to be a little cute. These fascinating creatures, related to sloths and anteaters, are somewhat new to Arkansas.

Recently, I kept waking up to find small holes in my front yard. A few turned into more. And then it seemed that my entire yard looked like a poorly executed attempt at building a putt-putt course—a 5,986-hole putt-putt course. I wasn’t happy.

Then I found the big hole that presumably led to the den of whatever was destroying my yard. To find the culprit, I became a woman on a mission. A late-night recon with a flashlight revealed the offenders: several large armadillos.

Armadillos are not native to Arkansas. They first arrived in the Natural State only about 100 years ago and continue to spread. (Should we throw a centennial party for them in 2021?) They have even been spotted as far north as Missouri.

Colloquially known as dillos or dillers, Arkansas is home to only one species: the nine-banded Armadillos (Dasypus novemcinctus). It’s presumed to have moved into the state from Louisiana and Texas, where there were established populations as early as the late 1800s.

Armadillos are covered with a shell that looks like a suit of armor. The name armadillo translates to “little armored one.” The armadillo’s shell is one of its best defense mechanisms.

Armadillos like soft soil that is easy to dig. So your backyard, your garden and your local golf course are prime dinner buffets. They feed on grubs, beetles and spiders, found on the surface and first layer of soil. Armadillos might also occasionally feed on the eggs of ground-nesting birds such as wild turkey and quail.

Since armadillos can’t regulate their body temperatures, they dig burrows into the ground where they will often spend as many as 16 hours a day. They typically try to avoid the hottest and coldest times of the day and are often more active at night, digging their burrows under some sort of cover (bushes, a parked vehicle or trailer) for an easy escape from predators.

Armadillos mate in the fall, and babies are born in the early spring. They look much like adults but with softer shells that harden as they grow older.

How to Rid Your Yard of Armadillos

As an animal-lover, I always try to take the most ethical approach. Looking at my yard’s condition, we had moved from a minor inconvenience to a significant problem that needed to be handled.

The Arkansas Game and Fish Commission has labeled armadillos as nuisance animals, so landowners have several options when it comes to ridding their yard of these digging fiends.

Armadillos are known carriers of Hansen’s disease, the bacterial infection better known as leprosy. The risk of contracting leprosy from one is extremely rare. However, it is advised that you wear gloves when handling armadillos or live traps that contain them. Traps and anything the animal has touched should be washed with a chlorine solution.

After several nights of setting traps, we were able to catch and remove several large armadillos from our yard. We transported them to property where they could live out their lives far away from humans and houses.

Hopefully, they won’t find their way back.

Cover photo courtesy of Arkansas Department of Parks and Tourism.

5 responses to “Armadillos in Arkansas”